Network Area Storage units are not always the most sleek of designs, having to cater for the rather boxy 3.5-inch mechanical drives they are often packed with. QNAP wants to change that, and bring with it some interesting technology – swapping out the boxy hard drives for sleek M.2 slots. Bring on the TBS-453A – the portable NAS.

At first glance, you would easily mistake the TBS-453A as a router or switch – a very complex switch, but still something rather non-invasive. However, when you take a closer look, you’ll notice a whole bunch of extras. There are four USB 3.0 and one USB 2.0 ports, five Gigabit Ethernet ports, a couple HDMI ports, IR receiver, an SD card slot, plus audio connectors. This thing is closer to compact desktop than a NAS. 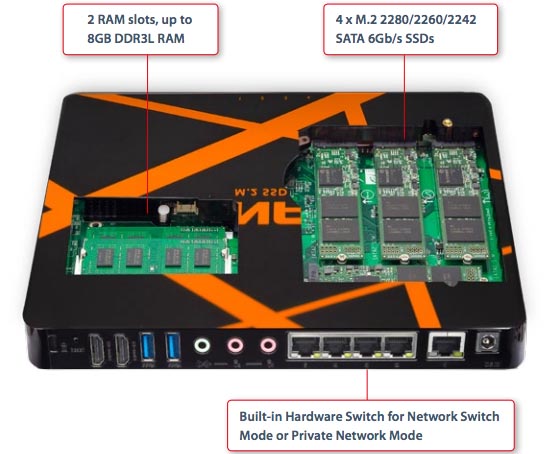 However, when you take off the lid and have a look at the internals, you’ll quickly find a different beast. There are a whopping four M.2 slots that can support all three major sizes, 2280/2260/2242, but the catch is that they are SATA based ports, rather than PCIe. But let’s be realistic here, a single M.2 PCIe-based SSD could max out a 10GbE port easily, so keeping the costs down with SATA slots is the sensible choice.

Other hardware includes an Intel Celeron N3150 quad-core Braswell processor, with up to 8GB of RAM available over 2x DDR3L ports. The five Ethernet ports support link aggregation, and the SSDs support the full variety of RAID setups, 0, 1, 5, 6, 10, plus hot spares.

The TBS-453A is one of many siblings that are to launched around the Intel Braswell processor, as it packs quite the punch for a little chip (as it’s being used in a number of other NAS units too). There will be 2, 4,6 and 8 bay variants of this rather intriguing NAS when officially released. Price points are not known just yet, but expect there to be a premium (in addition to the M.2 drives themselves).