About two weeks ago, the openSUSE Project released version 11.3 of its popular Linux distribution, and after putting it off for quite a while, I decided to give the latest version a download and see what SUSE has been up to. After all, the last time I took a serious look at SUSE (over four years ago!), it still went by “SuSE”… yes, it’s been quite a while. So far, my initial impressions of the latest version are quite good.

The latest version of openSUSE, as expected, includes updated versions of all the software found in the distro, along with a couple of new bundled applications, such as SpiderOak for net syncing and Rosegarden for audio editing. It also includes KDE 4.4.4 and the 2.6.34 Linux kernel, and believe it or not, it even includes a preview of GNOME 3.0 for those who are interested in testing it out.

Because I’ll be reviewing 11.3, I have set aside my usual Gentoo installation for a bit and installed openSUSE onto a spare SSD, and will be using it full-time for the next week or two, stopping whenever I figure I have enough experience to write a detailed enough review. I installed it on the weekend, and so far, things are looking good, although there are a few niggles that I’ll be touching up on in the full review.

First and foremost, I have to say that the installation was very simple, and almost enjoyable. There is SO much customization to be had, that you could never complain about there being a lack of it. Unlike Windows, there’s no simple “click and install”… here you have full control over software packages, and can configure things like users, partitions and other things before you hit the desktop. Some might consider this to be an inconvenience, but meh, I love the control.

One thing I like about the distro so far is how full-featured it is. There are many installed applications right from the get-go, and the only thing really lacking is media codec support. But even that’s taken care of rather promptly, as the first time you try to play an unsupported file, openSUSE will tell you how to install all the support you’ll ever need (and that seems about right, since I’ve tested a wide-range of files and all have worked).

The screenshot you see below is a fairly modified version of my install, with the wallpaper being the main difference. Desktop fonts haven’t been altered, so overall, the installation looks quite good. I have a beef with the small clock, but that’s about it. The taskbar applications are also a tad hard to read at times, but that’s more the fault of my wallpaper choice, and the fact that the taskbar is translucent (that can of course be changed).

I’ll have a full review of openSUSE 11.3 in the very near future, so stay tuned. I am planning on ramping up our distro reviews and like this one, I’ll install each one and use them full-time for some time in order to gain a better appreciation or understanding for each one, while of course discovering the issues as well. For now, you can read a lot more about the latest release on the official site. 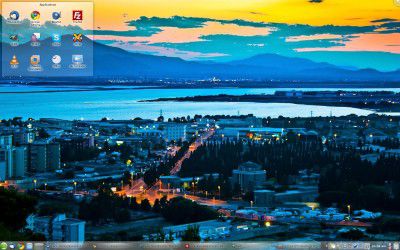 The openSUSE Project is pleased to announce the release of the latest incarnation of openSUSE, with support for 32-bit and 64-bit systems. openSUSE 11.3 is packed with new features and updates including SpiderOak to sync your files across the Internet for free, Rosegarden for free editing of your audio files, improved indexing with Tracker, and updates to Mozilla Firefox, and Thunderbird.