For the Raspberry Pi Foundation’s fifth birthday since the launch of the first Pi Model B, a new Pi has been released that will usher in a new wave of extremely small compute projects. Just over a year ago, the original Raspberry Pi Zero was launched, not much bigger than a thumb drive; the $5 computer was so cheap and small, it was stuck to the front cover of a magazine. Today, the Zero gets an update to include WiFi and Bluetooth.

The Pi Zero was an oddball of a computer. The power of an original Pi, but in a form-factor so small, it defied belief. The biggest problem with it was a lack of connectivity. With a single mini-HDMI port for display and a micro-USB port for data, there was no network access and no easy way to connect a keyboard/mouse without using a hub (which would cost more than the Zero itself). It was mainly designed for small projects that needed the flexibility of a Linux OS that was beyond the reach of a typical micro-controller, but didn’t need much user input. 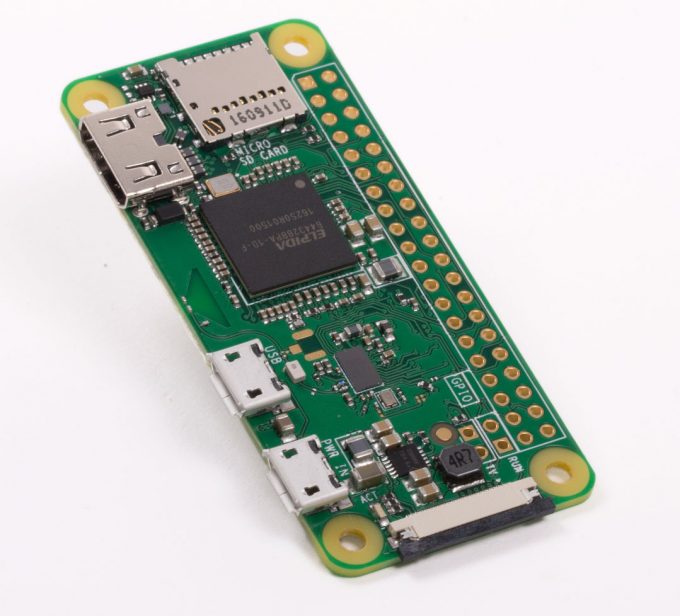 The Raspberry Pi Zero W, much like the Pi 3, packs in a small wireless chip that adds 802.11n and BT 4.0 support (2.4GHz only), thereby removing the need for a hub for network and peripheral connectivity. The wireless module won’t break any speed records though, with typical speeds of about 20Mbps (rather than 150 that the spec can handle), but it’s enough to run remote access. Bluetooth support means wireless keyboard and mice can be used, or even remote access/control with a smartphone.

Beyond the wireless chip, everything else about the Zero W remains the same as the Zero. The 1GHz single core processor is much the same as the original Pi (but clocked faster), with 512MB RAM. There are headers for composite video (if HDMI is not available), and the same 40-pin GPIO headers are available (although require soldering) which allows direct connectivity to micro-controllers, motors or Pi HATs (think Arduino Shields).

The Zero W will be made available for $10 before taxes, so it is more expensive, but cheaper than buying a hub plus wireless dongles (plus the knowledge of guaranteed compatibility with the chip). If you are looking for inspiration on what to use the Pi Zero for, try a tiny arcade cabinet.