It’s almost hard to believe, but it’s true: Red Dead Redemption 2 is coming to the PC. For some Rockstar fans, this announcement is a little bittersweet, since the original RDR never came to PC, despite an immense outpouring of support from fans. Nonetheless, PC gamers who’ve been unable to play the series up to this point will soon be able to end their drought.

Perhaps the best thing about this announcement is that the actual release is only a month away: November 5. On that day, the game will be available on Epic Game Store, Greenman Gaming, and Humble Store. Steam is clearly being treated as a third-class citizen here, and will have the game launch there in December.

But wait… there’s another store we’ve yet to mention: Rockstar’s own. Because the world doesn’t have enough launchers as it is, and Rockstar Social Club has been so highly regarded, the company wants to create its own. Knowing that not everyone is going to jump at the opportunity to install a new launcher, Rockstar is offering a free copy of Grand Theft Auto: San Andreas between now and October 9. 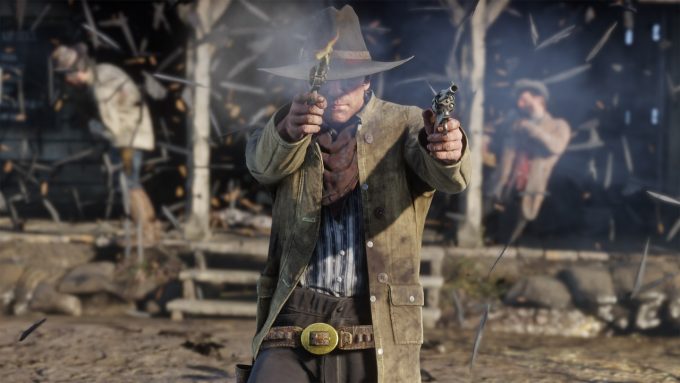 For those who want to preorder RDR2, you’ll be able to choose two of six games as a gift. San Andreas is on the list for those who miss the initial promotion, with GTA III and GTA: Vice City found alongside Bully, L.A. Noire, and Max Payne 3.

RDR2 preorders begin on October 9, the same day the free San Andreas gift expires. At that time, the company plans to release a batch of screenshots, recommended system specs, and more details. We hope the “more details” represents a peak at some PC-exclusive features, or at least higher detail capabilities in general. Ultra-widescreen support sure wouldn’t hurt, either.