In a possible foreshadowing of things to come, Samsung is today introducing the 860 QVO SATA SSD series, in 1TB, 2TB, and 4TB capacities. These drives are intended to hit ultra-low price points and do double-duty as long-term data storage drives while offering many of the advantages of modern flash drives. Samsung states the “860 QVO achieves the same level of performance as today’s 3-bit MLC SSD, thanks to Samsung’s latest 4-bit V-NAND and the proven MJX controller.” 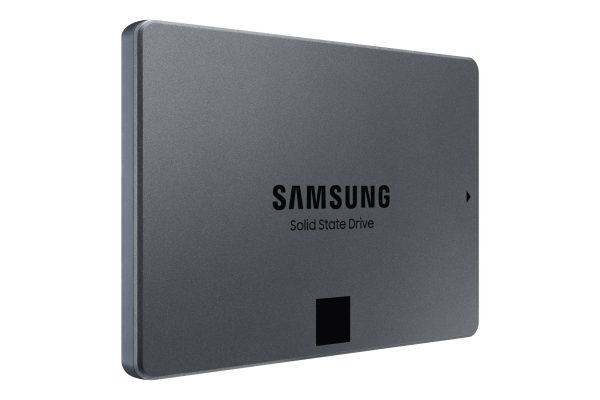 Long term data storage is still the province of traditional platter hard drives, but the 860 QVO is the first step to changing that. The 1TB QVO will debut at a $149.99 MSRP, making it a mere 15 cents per gigabyte, which easily will place it below most current SSD prices. As you might already suspect, the QVO series will utilize 4-bit QLC NAND, or “V-NAND” as Samsung calls it, to achieve these price points.

Flash drives can have four types of NAND: SLC, MLC, TLC, and QLC – these denote how many bits can be stored per cell. It is the age-old conundrum of price/performance. The more bits stored increases the overall capacity (and hence lowers price-per-GB) but in trade-off lowers the long-term endurance and performance of the drive.

At 360 terabytes-written for a 1TB drive, the QVO certainly won’t win any endurance awards, but as a long-term data storage drive where data is usually written once or a few times and read often, it doesn’t have to. Solid-state drives provide a certain allure for long-term storage simply because they lack any moving parts. Not only does it give extremely low idle power consumption but the only thing to wear out will eventually be the NAND itself via data writes, unlike spinning hard drives that are filled with numerous, precisely calibrated moving parts that over time are guaranteed to eventually break or wear out.

The 1TB model is $149.99, but pricing has not yet been revealed for other drives which are expected to become available on December 16th. Traditional platter drives can be found anywhere from $0.02-0.05 per gigabyte, so $0.15 remains some distance away from price parity. Even so, with future flash forecasts for the next two years predicting increasing supply and upcoming advancements promising greater densities, it now seems to be only a matter of time before solid-state drives begin to make inroads further into the hard drive market.