Samsung Hoping to Sell Phones with Flexible Screens in 2012

When visiting trade shows such as CES, we’re often exposed to what I like to call “pre-fads” – that is, things that are obvious to become fads as soon as mass-production occurs. We saw it with ‘3D’ TVs, OLED screens, netbooks, tablets and so forth. There’s one piece of tech that we’ve seen time and time again that has yet to make it to market, however: flexible screens.

That could change in 2012 if Samsung has its way. In a statement made last week, the company said it was working towards releasing phones with flexible screens next year, with the first half of the year being the goal. In time, we might see flexible screens on tablets and other devices – but no one said it had to be mobile. 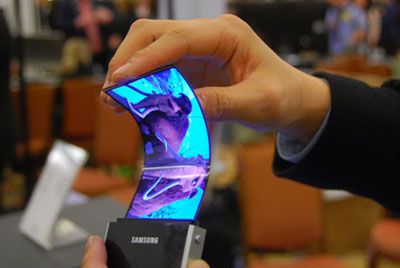 I like the idea of a flexible screen, but I admit that I’m failing to see a practical use for one. A common example or idea has been to create an advanced watch using the tech, where the device would wrap around your wrist like a normal watch (albeit a wider one), and offer functionality on par with a mobile phone. It’s an “out there” idea, but I can picture it happening at some point – even if the products remain a niche indefinitely.

Other ideas have featured products where the thin screen would slide out of the device and be usable. Picture a small handheld device half the size of a phone, but a bit wider. Because the screen held inside is flexible, it could simply wrap around itself much like retractable measuring tape, and then be unrolled when it needs to be used. Unlike the watch idea, this is not one I see happening in a realistic way anytime soon, but it’d still be possible.

The most common-sense idea would be to use these flexible displays for the sake of added protection to our regular phones. All too often, dropping a phone or sitting on it can damage the screen – but if the screen is flexible, it’d be much harder to damage in any real way. At least, you’d assume so.