Samsung Pairs 24 SSDs Together in RAID for Ultimate Speed

We all know that SSDs are fast, that much is no secret, but just how fast are 24 strapped together in a RAID configuration? Well, freaking fast, of course. Some Samsung employees decided to find out first-hand what benefits such a configuration would entail, so they took 24 256GB models (~$11,000 USD), put them in a high-end system, and then went ahead to see what kind of benefits could be exhibited, and yes, it’s all quite drool-worthy.

In one test, they opened up the full Microsoft Office suite (looks like eight applications in their taskbar). From the moment they pushed enter, the entire suite was on their screen ready for action in half of a second. That’s impressive, but I preferred the next test, which opened up every-single application in the Start menu. In 18.09s, the drive configuration was able to open up 53 applications. Insane!

I admit, I’m not completely sold though. The performance is fast, but I’m curious if that many drives were really even needed. I believe that using just 12 would have delivered results quite comparable to this. After all, their Iometer tests showed bandwidth of 2Gbps, but given that these drives each have a limit of 220MB/s Read, the bandwidth theoretically should be somewhere in the ballpark of 5,280MB/s. And where SSDs are concerned, latencies aren’t a real issue, so 24 drives seems to be total overkill. Either way though, the performance is incredible, and these tests really go to show just how large of a bottleneck storage is in our current PCs. 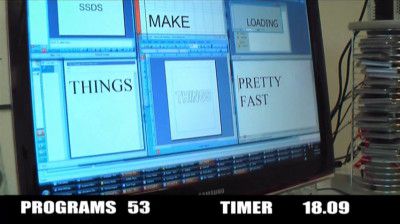 Samsung techies linked 24 of the company’s 256GB SSD drives together in a RAID with the hopes of making the fast SSD drives even faster. Basically, we all know that hard drives are holding other components in computers back, slowing down our day to day usage. But I’ll be honest in saying that I didn’t things were this bad. While almost no mortal could afford to build this amazing rig, suddenly that SATA3 technology isn’t looking so impressive.