Good things really do come in small packages. Samsung’s 30.72TB 12Gb/s SAS solid-state drive doubles its previous-gen counterpart while retaining a svelte 2.5-inch form-factor. If that doesn’t sound impressive, then lets phrase it this way. The PM1643 leverages 64-layer, 3-bit (TLC) 512Gb chips across 32 16-die packages to attain its impressively dense characteristics, but that is just the start.

To match its absurd capacity, the PM1643 comes with 40GB of DRAM cache. Yes, that’s a large B as in gigabytes. Forty gigabytes of DRAM cache means this huge SSD, in some respects, shares the characteristics of an actual ramdrive, with a massive pool to cache and order data before writing to the NAND. Samsung had to make use of though-silicon-vias (TSVs) with its 8Gb DDR4 chips to create ten 4GB TSV DDR4 packages to achieve the final 40GB total. No word yet as to how Samsung found the space inside the drive for this much DRAM cache along with the NAND chips, though analogies to New York apartments are already springing to mind. 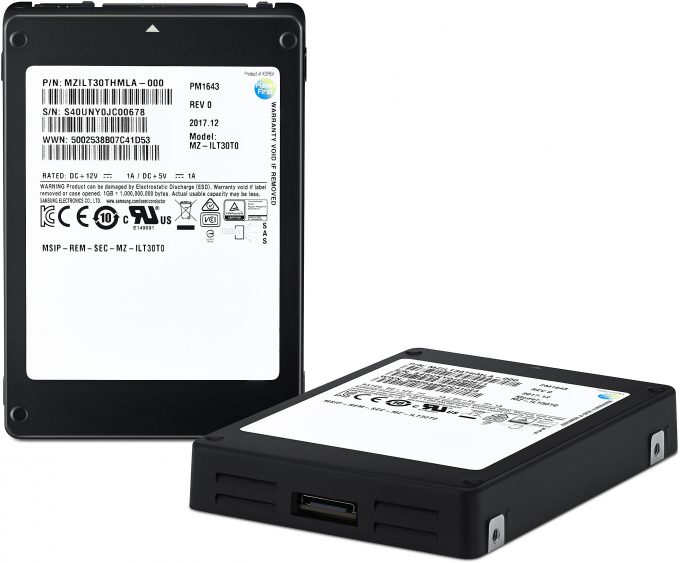 Read and write performance of the 30TB SAS model is listed at 400,000 and 50,000 IOPS for read and write respectively, with sequential performance listed at 2.1GB/s and 1.7GB/s, respectively. Suffice to say what the PM1643 lacks in speed, it more than makes up in size. Some quick math shows that it would take a little over five hours of sustained writes just to fill the drive once!

No word is mentioned regarding battery backup protection, though we suspect there wasn’t any room left for it inside the drive itself. As such, any prospective customers will undoubtedly be expected to have multiple fail-safes in place as it would be problematic to lose 40GB of cached data from a brief power disruption!

The PM1643 drives are launching initially at 30.72TB, but will later be joined by half-sized models of 15.36TB, 7.36TB, and continuing all the way down to a “measly” 800GB version. No word is mentioned on prices, though if you have to ask….  That said, the previous generation 15TB model was around $11,000, give or take a few grand. Endurance is rated for one full-drive write per day for five years, and the MTBF is two million hours. Hopefully it won’t take that long before someone opens one so we can peer inside.