A couple of years ago, Seagate quietly decommissioned its Barracuda brand in place of a rather dull ‘Desktop’ series of hard drives. Today though, Seagate has decided to bring back the old naming, but with a slightly different styling of BarraCuda (why the capital C? who knows…). There are four new series of drives, each ranging in capacity, some of which are up to 10TB, but collectively will be referred to as the Guardian series.

There is a battle going on between solid state and mechanical storage. SSDs are getting bigger and cheaper, HDDs are just getting bigger; but so far there is still a rather large gap in density, and mechanical storage still leads with impressive 10TB capacities – if you have a need for such storage. With cloud storage and on-demand video, the necessity for local storage has reduced considerably in the desktop market, but for SMB, movie hoarders with NAS boxes or video surveillance, there is still a need for high-density storage.

With Seagate dropping the Desktop and NAS branding, it will be switching over to a new set of brands pulled from a 90s marketing strategy guide. In the top spot is the BarraCuda Pro, which is at the performance end of the spectrum, with densities range from 6TB to 10TB, and covered by a 5 year warranty. The lower end BarraCuda (non-pro) covers the 1TB to 4TB range, with only a 2 year warranty. 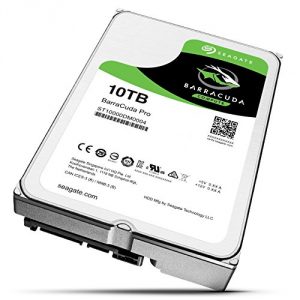 FireCuda is the hybrid drive or SSHD, combining a large solid-state cache with a standard mechanical hard drive. They come with 8GB of SSD space which works as a large cache for frequent file access and rapid saving of data. This means that regular file access to the operating system or games, will be mirrored in the SSD section, significantly improving access times and speed. But for large files like movies, there is no real benefit. SSHDs are generally a good compromise if you can’t fit a dedicated SSD into the system.

Two new brands or renaming of existing brands is also happening. The first is IronWolf, which is a scary name for what amounts to the traditional NAS drive. IronWolf is designed for 24/7 operation, with capacities ranging from 1TB to 10TB, and up to 8 drives per array. There is also mention of an IronWolf Pro range too, coming later in the year. These Pro-less versions only offer a 3 year warranty.

The last set of new drives are the SkyHawk range, which are amusingly the new name for the original Surveillance drives. These are used in DVRs and NVRs, either for recording IP Cameras or television broadcasts. These drives behave slightly differently compared to normal drives in that they are not meant for random access, but continuous recording – skipping errors and carrying on recording regardless of the circumstance. Again, they come in the full 1TB to 10TB range with the same 3 year warranty as the IronWolf.

It should be noted that all of these drives are the consumer versions and the 10TB capacity drives do not make use of Shingled Magnetic Recording, which is typically found in high density archive drives. As such, the write speeds should be fairly consistent. You can explore the full range of new drives from Seagate directly.