Seagate Confirms 3TB Hard Drives in 2010, But With a Few Catches

Last week, we posted about a rumor that 3TB hard drives could be en route for delivery in 2010, and it took no time at all for one company to step up to the plate and verify it: Seagate. In talking to UK tech site THINQ, Seagate’s Senior Product Manager, Barbara Craig, admitted that it would be “announcing a 3TB drive later this year“, which for media-hounds all over, sounds great.

In the story of 3TB though, there is both some good news and bad news. The good news is of course that the drives are coming, but the bad news is that with most of today’s computers, we won’t be able to use them. Due to the old-school method of constructing a hard drive from a software level, LBA (logical block addresses) only support up to 2.1TB, which turns out to be precisely the reason that we haven’t seen 2TB+ drives to date.

That’s not all… even the MBR (master boot record) needs an overhaul to support Intel’s GPT partition table scheme, as current MBR implementations are again limited to 2.1TB. So here are two HDD-specific features that will help solve the issue, but believe it or not, there’s even more that needs to be done in order to have a 3TB drive work on your PC.

The first and most important is that you need a 64-bit OS, because with a 32-bit OS you will only see some of the drive, not all of it (this used to be a common issue when the first gigabyte HDDs came to market). Finally, an EFI is going to be required in order to utilize drives at over 2.1TB (one again). That means that any PC today using a typical BIOS will be unable to use a 3TB drive. Well, that is unless a RAID card offers a solution, but even those will need to be updated to support such a large disk.

Although 3TB drives will be inaccessible to most people at launch, the need to move forward with how our HDDs internal structures are handled is long overdue. At the same time, we’re likely also very overdue for the move to EFI. So while things may be inconvenient at first, there will be rich rewards in the long-run. 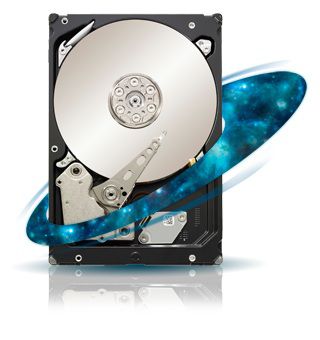 Unfortunately, though, the range of addresses is limited to capacities of 2.1TB. It’s a limit that until now has seemed so far off in the future that hardly anyone’s considered it a problem. “I think that’s what everyone thought,” says Craig. “Nobody expected back in 1980 when they set the standard that we’d ever address over 2.1TB.” Craig explains that “we need to extend that to Long LBA addressing,” in order to get around this. Long LBA basically increases the number of bytes used to define an LBA address in the command descriptor block, but it also requires a supporting OS.