Want to build a powerful HTPC but don’t want it to hog all the room in your TV stand? That’s SilverStone’s goal with the GD04, a new home theater chassis that offers enough of what you need to build the ultimate HTPC, but for a very reasonable price (~$100). And if you don’t mind the front of the chassis being plastic rather than aluminum, you could get it even cheaper (~$80).

One key thing to mention here is that the GD04 isn’t as deep as most HTPC chassis’. Although I don’t have the exact dimensions on-hand, comparing this to other similar chassis’ at the SilverStone booth, I could easily spot the size difference, and this is no doubt going to appeal to many people.

But what about airflow? I had the same question, and apparently SilverStone put in much thought and care into the design, that when fully installed, the GD04’s airflow and efficiency can match that of their full-towers. It’s designed in such a way that it compresses the warm air so that it escapes quicker. The result is a very powerful machine that won’t overheat. 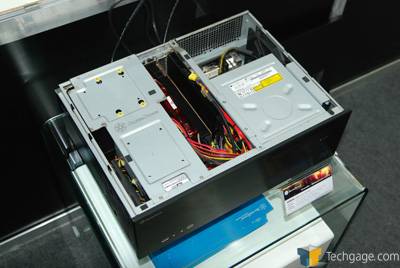 Care was even given to those who want to use extra cards that are not required to be plugged into the motherboard, such as an ASUS Xonar audio card that can be equipped with a daughter card. In that instance, the card would be installed in the back left corner, making accessing it a non-issue.

In the image above, you’ll notice that a full-sized GPU is installed, and apparently there is no limit. I was told virtually any graphics card today will fit, and heat won’t be a real issue. There’s also room for up to three hard drives, so storage isn’t going to be an issue either. Overall, the GD04 impressed me quite a bit, because for $100, it looks good, has a keen design and is small, yet won’t cause your components to overheat. If this thing has a fault, it’s not obvious to me.