CNET News.com analyst Brooke Crothers speculates that the long-awaited drop in solid state drive prices may finally be within reach. Making this happen, Crothers suggests, will be Multilevel Cell (MLC) technology, which enables SSD capacities above 100GB, competitive with the 80GB hard drives common in current laptops. In fact, it’s suggested that we could see MLC drives as large as 256GB by early 2009.

Since the introduction of MLC technology to the solid state drive product category, manufacturers have flocked to the technology, including Samsung, Toshiba, and STEC. Even Intel is preparing to enter the market for high-capacity SSDs, based on its own multilevel cell technology. However, Intel warns that with MLC designs, performance is slower than Single-Level Cell (SLC) designs, and can’t tolerate as many write cycles. And if anyone’s ever had a flash drive go dead on them, they know that once the data is gone, there’s no salvaging it. Adopters would still do well to keep meticulous backups of SSD data on a reliable mechanical hard drive, even if the drive doesn’t spin all the time. 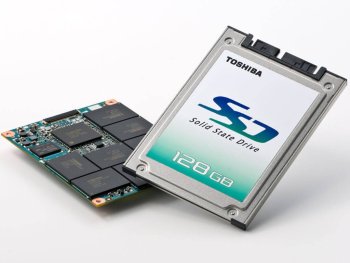 "Compared to the price you’re paying today for a 64GB drive. You’ll get a 128GB of storage for less than half the price (of the 64GB drive)," said Patrick Wilkison, vice president of marketing and business development at STEC, a supplier of MLC-based solid-state drives.