When we heard rumblings of the first ‘hybrid graphics’ systems, we simply thought GPU manufacturers would use the feature as a way to capitalize on the power savings afforded by hybrid graphics systems and sell more of their own products to PC and motherboard makers. For those coming late to the party, hybrid graphics systems save power and decrease idle thermal load by disabling the system’s discrete GPU and reverting to a lower-power GPU, typically integrated into the motherboard’s chipset. To this end, NVIDIA recently announced that all their chipset products would feature an integrated graphics processor, termed a “Motherboard GPU,” or mGPU.

What we didn’t expect, however, was that manufacturers might try to combine multiple GPU platforms in their hybrid-graphics systems. We’d figured that GPU manufacturers would try to lock their discrete GPU products to their own integrated-graphics chipsets for hybrid-graphics applications, but Sony has managed to combine the integrated Intel GMA X4500 graphics core on an Intel G43 chipset with an NVIDIA GeForce 9300M GS discrete GPU. It’s an intriguing solution, but it virtually rules out the possiblity of the two graphics cores operating in tandem via Hybrid SLI. 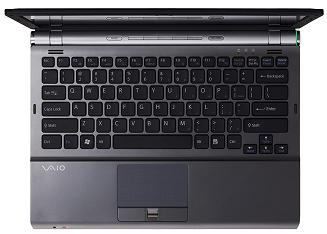 Sony lists the graphics system as “Hybrid Graphics” with a “Dedicated Hybrid GPU Switch” based on the Nvidia 9300M GS graphics chip and Intel 4500MHD integrated graphics silicon. What makes this unique is that the switch can be done on the fly.