We’ve talked a lot about SSDs in our news section before, and for good reason. They’re small, fast and desirable in almost every way. But, like most things that are “too good to be true”, there are a few caveats – namely price and fragmentation. Our friends at PC Perspective decided to thoroughly investigate the latter issue, and I have to admit, the results are very interesting. Simply put, while SSDs can offer incredible performance at first, their performance can degrade fast.

Due to how SSDs are designed, they’re bound to become fragmented, and that issue is amplified when we’re talking about models with small densities, such as 80GB or lower. Fragmentation might sound like a simple issue, but really, the effect it has on performance is huge, and the problem goes beyond something that a defragmenter could fix (most often they will make things even worse). In some of the site’s examples, the write speed degraded to around ~25MB/s, from the normal 70 – 80MB/s. That’s massive. Surprisingly enough though, that issue can actually be remedied…

… but, with yet another downside. In order to restore the drive to its original performance state, you’d have no choice but to format the entire thing. If the drive is stores your main OS, you can likely trick it in a few ways to improve performance, but you’ll never see the performance you did after the first OS install. The article goes into depth as to why, and how to remedy it, but in truth, it really doesn’t put SSDs in a terrific light. Larger SSDs would put the issue off for a little while, but that would all depend on how fast you fill it up. Hopefully OS’ and SSD memory controllers (or the firmware) can become even smarter sooner than later to avoid such performance degradation in future models. 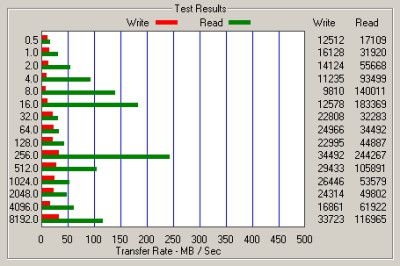 Once internal fragmentation reached an arbitrary threshold (somewhere around 40 MB/sec average write speed), the drive would seem to just give up on ‘adapting’ its way back to solid performance. In absence of the mechanism that normally tries to get the drive back to 100%, large writes do little to help, and small writes only compound the issue by causing further fragmentation.