For a handful (no pun) of reasons, Valve’s Steam Deck is a seriously cool product. It enables quality gaming while on-the-go, and unlike many devices competing for the same consumer dollar, it provides a much more open platform that can allow users to get creative. Should they chose to, users could even replace the operating system the Deck ships with, and tweak the software to eke as much performance out of it as possible.

And then there are people like ETA Prime (via VGC), who managed to supercharge his Steam Deck with the help of an… AMD Radeon RX 6900 XT discrete graphics card. Yes – as in the full-fledged top-of-the-line 300W gaming GPU from AMD.

Hopefully no one is surprised at the fact that Valve didn’t have discrete gaming GPUs in mind when developing the Steam Deck; naturally, you have to jump through some hoops to have one join in on the fun. Because Deck doesn’t have Thunderbolt connectivity, ETA Prime relied on the M.2 slot to provide an external PCIe slot, as well as a desktop power supply to power the behemoth GPU: 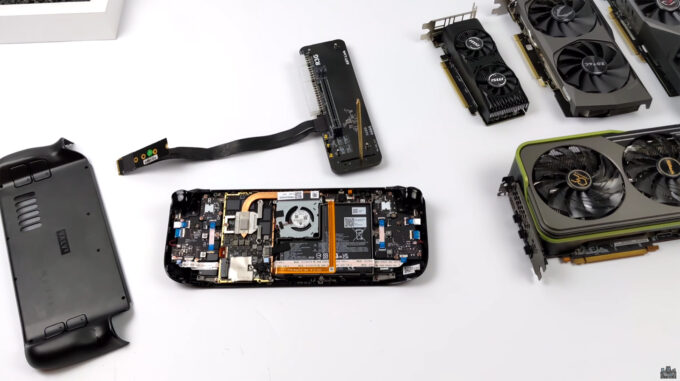 Steam Deck’s M.2 slot can be used to route a GPU instead

There are some obvious caveats with this overall design, and some not-so-obvious. Because the PCIe extender is using the M.2 slot, it means that OS/game storage will hinge on an SD card. SD cards are going to be slower than built-in NVMe storage, but ETA Prime noted the performance was actually better than expected – a good sign. On a similar note, because the Steam Deck OS can’t currently install to an SD card, it means that Windows will be required for this use.

Of course, with portability being the name of Steam Deck’s game, strapping on a discrete GPU and power supply means that you won’t be moving from wherever you’re sitting. You’ll certainly be playing games at higher detail levels, and higher resolutions (when connected to an external display), but beyond that, you will be pretty much stationary while you play. 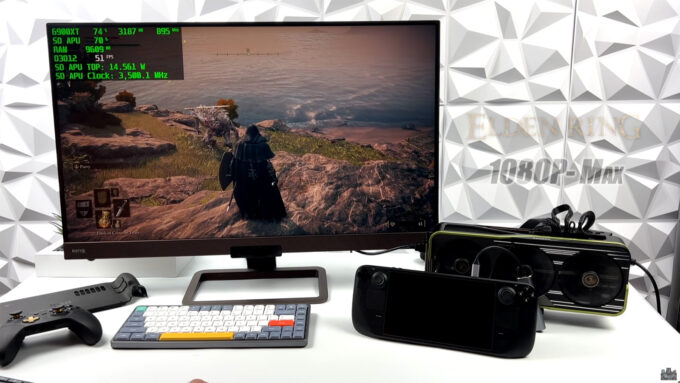 While this is definitely more of a fun project rather than a serious one, it’s important to note that a GPU like the RX 6900 XT is effectively overkill on a platform like this, thanks to the rather modest hardware in the rest of the setup. The CPU won’t be able to maximize the potential of the GPU, nor would the GPU have its expected bandwidth, thanks to being fed through an M.2 slot.

All of that aside, though, this is one really cool project, and honestly something we didn’t even expect to see. It just goes to highlight how “open” the Steam Deck platform is. It’s portable, but it’s still effectively a PC. Something tells us this won’t be the last cool project we see revolve around the device.