When someone passed me along an article Anand wrote called, “The RV870 Story: AMD Showing up to the Fight“, I wasn’t sure what to make of it. Just what could it be about, exactly? Well, my initial thoughts on what it could be were a bit off, and I found the entire article to be extremely enlightening. Anand talked to many different people at AMD/ATI about the path to RV870 (Cypress), and if you at all care about how the industry works, this article proves to be a great peek inside.

Two summers ago, AMD released its ATI Radeon HD 4800 series of GPUs, mere months after NVIDIA launched its own GeForce GT 200 series. At the time, no one expected much from the HD 4800 series, but most of us were knocked off of our feet. After all, NVIDIA’s GT 200 cards were fantastic performers, but with its robust architecture, AMD managed to beat even those with its own cards.

Things only improved with the HD 5800 series launch, which delivered cards about 2x as fast as the previous generation. Plus, it didn’t stop there… we were introduced to two fantastic pieces of technology, DirectX 11 and also AMD’s own Eyefinity multi-monitor technology. With ATI’s rapid comeback, you might be asking yourself how it happened. There must have been some new sort of direction, and that seems just to be the case.

Carrell Killebrew joined AMD in 2003, and quickly became very vocal about how things should be done, and believe it or not, he’s also directly responsible for delivering Eyefinity to the market. Surprisingly, the amount of secrecy around that particular technology before the Cypress launch is simply incredible, and could be considered on par with Apple’s NDA mechanics. Regardless of how it got here, though, it’s a good feature to see, and I’m sure it will continually become more refined as time goes on.

It’s hard to sum up this article in a simple news post, but I highly recommend reading through and gain the perspective of how things are run within AMD, and the industry as a whole, and also what exactly changed from within the company in order to bring forth the changes we’ve all seen. One thing’s for sure… turning around an entire division sure isn’t easy. 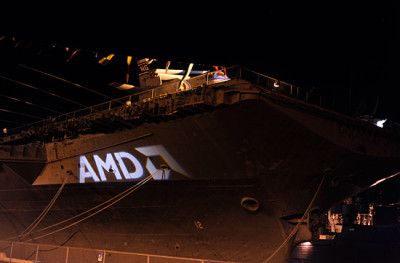 The market has big bulges and you had better deliver at those bulges. Having product ready for the Q4 holiday season, or lining up with major DirectX or Windows releases, these are important bulges in the market. OEM notebook design cycles are also very important to align your products with. You have to deliver at these bulges. ATI’s Eric Demers (now the CTO of AMD’s graphics group) put it best: if you don’t show up to the fight, by default, you lose. ATI was going to stop not showing up to the fight.