The State Of Western Digital Overseas & Here At Home

You’ve no doubt heard or read about the recent flooding in Thailand earlier this month and how catastrophic it has been for those living in the area. A quick look at things from a tech perspective shows that one of the biggest hard drive manufacturers in the world, Western Digital, is in a bad spot at the present time as well. 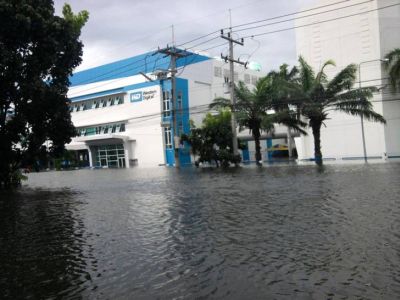 Source: This is my next

The flooding may be old news considering we live in a super-connected world with more information than ever at our finger tips, but yesterday I received some pictures by email from a friend and decided to look into the situation further. What I’ve found is that it looks like the storage game is going to change for a while, not necessarily for the better.

According to an official press release from WD, operations in Thailand have been suspended with at least one of the manufacturing plants sustaining damage. It goes on to state that the flooding will have a significant effect on the company’s ability to meet demand in the fourth quarter of this year. Two days later Western Digital issued another press release reporting that it took in $2.7 billion dollars revenue for the first quarter of this year. That can buy a lot of buckets.

While checking out new arrivals at various online retailers I came across a notice on one site that limits shoppers to two Western Digital hard drives per order, so if any of you are in need of a hard drive, I wouldn’t wait too long. There’s a good chance that the price of all drives straight across from the board are likely to rise.