CES may be over, but there is still a wealth of new releases to cover. Thermaltake was on call with some new chassis designs for big builds, and water coolers to match. While there is a fair amount of bling with the AIO coolers, the chassis mean business with huge areas to fit elaborate cooling loops.

We’ll start with the Core X71, the bigger beast of the two new chassis. It’s a monstrous full-tower case with support for, wait for it, not one or two triple radiator mounts, but up to four. We’ll break it down for you. 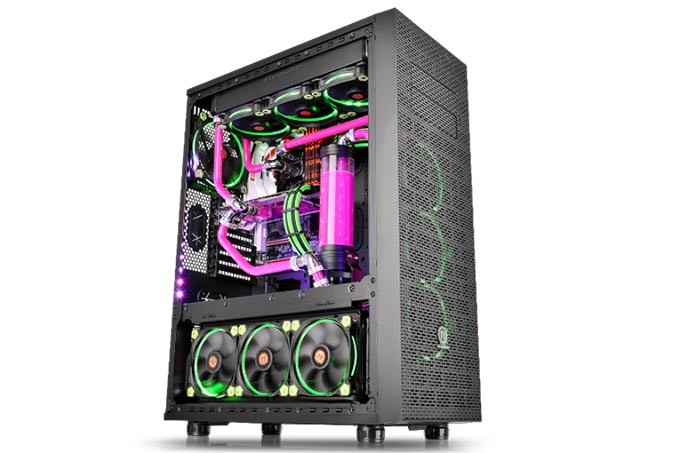 The front intake can support a 420-480mm  long radiator, which can easily fit a 3x140mmfan-assisted radiator (larger if need be). Each side of the chassis supports mounting points for a 3x120mm radiator. Then finally, the top can also support another 3x120mm radiator mount. Oh, and if that wasn’t enough, the rear mount next to the motherboard I/O panel supports up to a 14cm mount point.

If 140mm fan mounts are too small for each radiator, there mount points for 200mm fans in dual configurations. A handy little chart was provided for you to check against, as well as diagrams in the document list.

Apart from the huge amount of space for water cooling, the chassis comes with all the usual assortment of mod-cons for the budding system builder, such as lots of cable management ports, an exposed motherboard tray for attaching CPU coolers, multiple locations for hard drive mounts, a separate section for the PSU and base-mounted radiators, and lots of fan filters that slide out or attach magnetically. Oddly though, it only supports up to ATX, no extended motherboards, but still supports Micro ATX and Mini ITX. 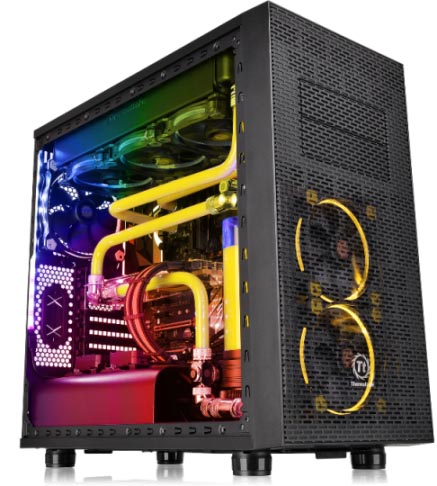 In comparison, the Core X31 is a much more compact, Mid-Tower chassis. It can support a triple radiator up top, and a dual radiator at the front. The PSU has a separator panel, although not strictly in a separate chamber like the full-sized sibling the Core X71.

Hard drive cages can be added or removed, with specific mounts for 2.5-inch SSDs. It comes pre-installed with three 120mm Riing fans, with multiple RGB LEDs for some fancy lighting effects. The same magnetic and slide-out dust filters are also included to help keep the interior clean. 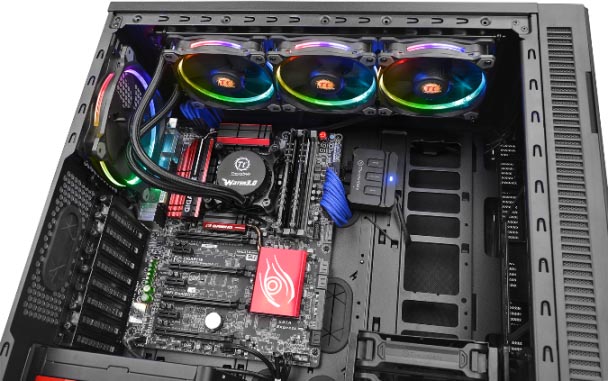 The Water 3.0 Riing RGB 360, as the name suggests, is the third iteration of the company’s Water AIO water cooling solution. While the water pump unit seems to be the same as the previous version’s, the new Water 3.0 does features the eye-catching Riing 120mm high static pressure fan.

So what’s so eye-catching with a new fan? The Riing grabs your eyeballs with RGB LEDs installed in the frame of the fan. The frame is also not your typical square box; rather, the frame is radiused, and at the corners are ears where the screws/bolts go through.

But the Riing isn’t all about looks. It’s cool to look at, sure, but it’s also designed and optimized for radiators (as well as for air cooling heat sinks), particularly those with high fin densities. The Riing fan produces high static pressure, which is perfect for pushing a lot of air molecules through arrays of cooling fins. 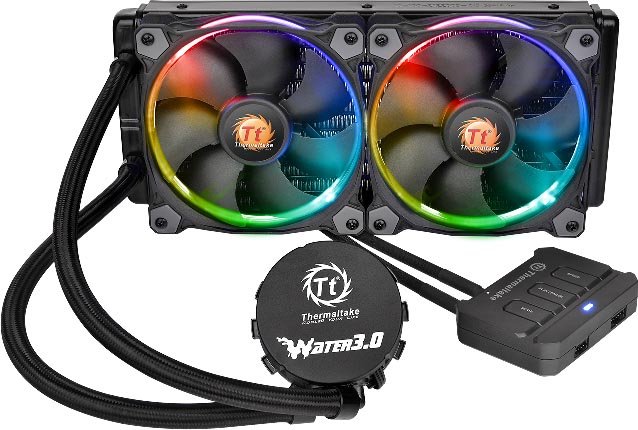 The Water 3.0 Riing RGB system includes a self-contained fan controller that switches between five LED modes, including solid colors of red, blue, green, white, or turns the LEDs off completely; it also can cycle through all 256 available colors. It also controls the fan speeds.

With the Water 3.0 Riing RGB 360, Thermaltake not only cools down your CPU; it looks pretty cool doing its thing, too.