During a meeting with Thermaltake at this year’s CES in January, the company gave us a quick preview of a new gaming peripheral line that would be released later in the year. At Computex, the exposure of this line was amped up in a big way, with numerous keyboards, mice and even gaming headsets on display. It seemed clear to me that a release was to be soon, and I was right… we should be seeing the first products launch in late summer or early fall, if not sooner.

As far as I’m aware, this will be Thermaltake’s first real foray into the gaming peripheral market, and I have to say I’m surprised it took this long. The company has already long been delivering quality CPU coolers, chassis, power supplies and much more for gamers for years, so peripherals seems like a natural extension of the company’s huge gaming focus.

I am not sure of all the model names of products on display, but I don’t think it really matters since there was simply so many of them there. The company obviously doesn’t want to just focus on one pricing segment of the market, but rather make sure that gamers of all budgets are going to be well taken care of. You can expect both low-end and high-end products, and some in between.

Because different gamers prefer different keyboard feels, Thermaltake will be releasing various models that feel different to type on, from quieter models to very responsive mechanical models. There are some models with glow-in-the-dark keys, and also some with colored WASD keys, to make fixing your finger placement an easy task in the heat of battle. 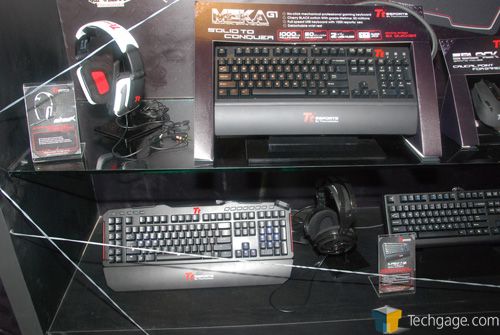 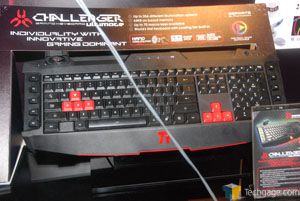 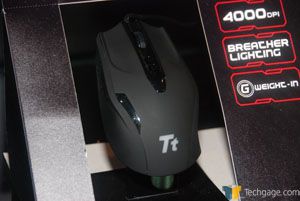 As has been typical of higher-end gaming keyboards, Thermaltake will be releasing some models with macro capabilities, and you can see below an example of the software that will be included. This software will offer a wide range of customization options, and because these keyboards will have on-board memory, you will not need to install the driver should you move the keyboard to another machine. Likewise, if you do indeed install the driver on another machine, you’ll be able to edit your macros as usual. 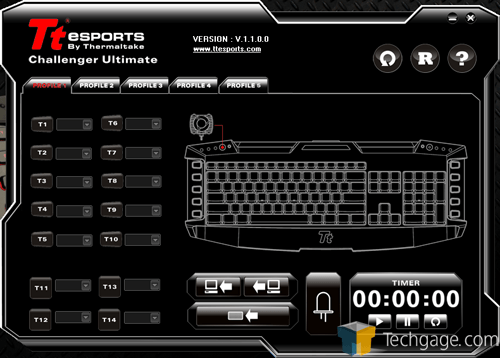 The company mentioned that while it will be offering a variety of gaming mice, they will not at launch feature macro capabilities. But that aside, like the keyboard selection, Thermaltake will be releasing multiple models, so one is bound to fit your needs. Finally, the company is even going to be releasing more than one headset, again to cater to different types of gamers. I tried one out briefly, but it was difficult to appreciate the sound quality and clarity given that I was in a massive room with thousands of other people. One thing I did notice though is that their design may just make your head sweat to death over time, so hopefully that’s not really going to be the case.

The official name for Thermaltake’s line of peripherals is “Tt eSports”, and has also been common of higher-end gaming products, the company got a lot of input from professional gamers, the SK Gaming clan in particular. This is a rather huge aspect of gaming peripherals to me, because no one plays games quite as hard and often as these guys, so you can really expect some good input and results when the peripherals finally hit the market. At least we can hope. We’ll be sure to get some of these products in at launch and “gage” their worth then.