The Level 10 chassis from Thermaltake has become one of the worst-kept secrets in tech. It was originally leaked on a few blogs a few months ago, and then showed off at CeBIT. Refinements have been made since then, and the company took the opportunity to officially unveil the unique chassis at Computex, and so far, it seems to be well-received.

This wasn’t an inexpensive chassis for Thermaltake to produce, and one reason for that is the tight collaboration between Tt and BMW Group DesignworksUSA. Such a relationship can’t be cheap, but the result seems to be well worth it, because Level 10 is truly unlike anything before it.

It’s made unique because each portion of your computer is separated from another, and careful thought was given to isolate heat in key areas and direct airflow properly. Thermaltake says that overclockers should have no limitations with this design, so despite it being designed so strangely, the cooling-ability is supposedly top-notch. 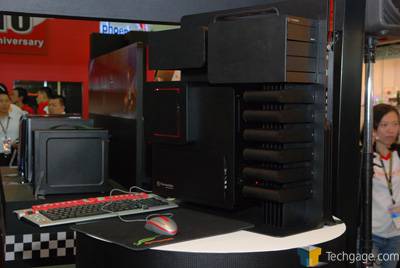 To install components, each portion of the chassis swings open, like you can see here, which makes placing whatever you need in there a simple process. the most difficult part might be the wiring, but once done, the entire install will be unbelievably clean… as you’d expect from such a design.

Thermaltake will be building 1,000 of these $700 chassis’ to kick things off, and if they sell as well as they hope they will, they’ll continue to produce them until demand dies down.