Among the onslaught of product announcements that were made at this year’s CES, a simple WiFi adapter hit our radar that excited us enough to talk about it. How could an adapter of any sort cause us to write about it over some other product? Well, it being the first realistic 802.11ac USB option is a good start. 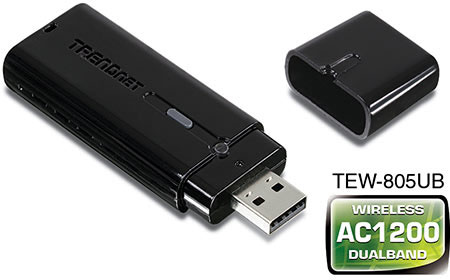 Prior to TRENDnet’s TEW-805UB, the lone USB option came from NETGEAR. It carried a fatal flaw, however: it came in a USB 2.0 design. For wireless tech that’s meant to peak at a theoretical 1.3Gbit/s, implementing it on an adapter that caps at 0.48Gbit/s is nonsensical. That’s where TRENDnet corrects things, as its adapter is USB 3.0.

If you already own an 802.11ac-capable router and would like to use your wireless to its full potential (or almost full potential), TRENDnet’s TEW-805UB can be had soon at retail for $70.