Ubisoft’s The Crew Spotted Running At An Official 60 FPS

It might not be a game that tops most people’s list this holiday season, but for me, there’s been no game slated for release this year that I’ve wanted quite as much as The Crew. When Test Drive Unlimited 2 came out, it took little time for me to become a massive fan, and for those who know some of the background of The Crew, it’s a game that could technically call itself TDU 3 and get away with it.

With as much potential as the game has, however, it seemed certain for a while that it’d be launching with a rather blunt case of consolitis, thanks entirely to a framerate cap of 30. When the beta first dropped, it was quickly discovered that a configuration file tweak could remove the limitation, but that’s hardly the way a PC gamer should have to do things – and plus, it wouldn’t be “supported”. Yes – a framerate not supported. It’s hard to believe.

At the end of July, I said that it’d be highly unlikely that the game would be released with that 30 FPS cap intact, and even since then, the company hasn’t given us a straightforward answer about what we could expect at launch. 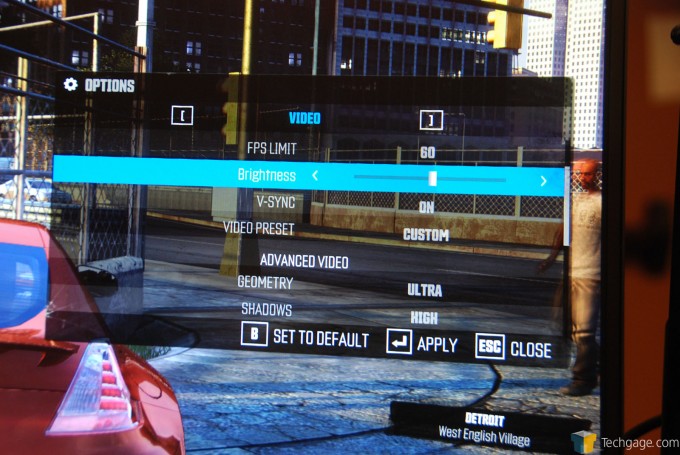 I was recently able to take a current version of the game for a spin, and felt compelled to check out the options. Surprisingly enough, the “FPS Limit” option now had two choices: 30 and 60. I played the game for a short bit, and it was very clear to me that playing the game at 60 FPS yielded no issues whatsoever. It was smooth as silk. This was my first time playing The Crew (I skipped the betas due to content duties – sigh), so I left wanting more. A lot more.

The Crew might not push our PCs to the limit as we might like, but despite the consoles undoubtedly having the bulk of the focus during development, it’s still going to look very sharp overall. I do appreciate the fact that there are a number of dials and switches to fiddle with in the game, and especially glad to see advanced graphics effects like NVIDIA’s HBAO+ and TXAA available – neither of which come as much of a surprise given NVIDIA’s tight relationship with Ubisoft.

The biggest problem I have with the game right now? The fact that it’s not out for another two months. Though with as much content in the queue as there is, perhaps that’s a good thing.