This week, 3DMark gained another feature test, this one revolving around the useful variable rate shading feature currently supported by NVIDIA’s Turing and Intel’s Ice Lake GPU architectures. This test becomes another that won’t run on AMD hardware, as we confirmed with the company a month ago that current Radeon archs do not support VRS (including Navi). Because VRS is implemented in hardware, it means we won’t see the feature with AMD GPUs until the next architecture launch.

What’s variable rate shading? It’s a feature we first heard about at NVIDIA’s Turing launch last summer, alongside the RTX features we’ve talked about a lot since then. With it, a supported game will render less detail in areas of a scene where it wouldn’t be appreciated, while delivering high-quality detail everywhere noticeable. The end goal is to improve frame rates while not impacting the overall quality of your scene. You can see the kind of analysis the tech does in this shot: 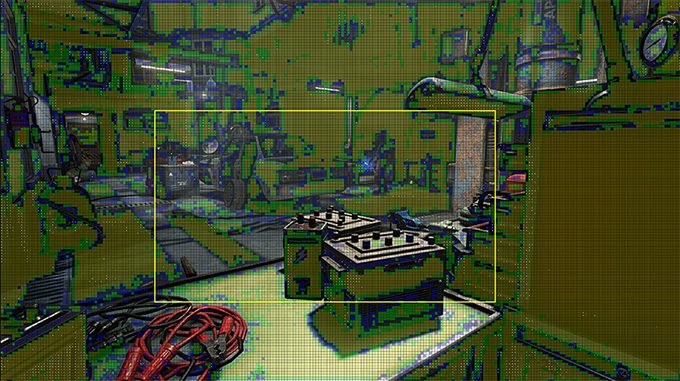 NVIDIA’s take on VRS is called NVIDIA Adaptive Shading, or “NAS” for short. No storage is involved here, nor is a hip-hop star. This NAS improves performance to a fair degree, with the video seen below highlighting gains of around ~7 FPS on average. If you want a good read on NAS, NVIDIA’s own post is worth checking out.

UL’s latest 3DMark update should make testing VRS on both NVIDIA and Intel easy. We don’t have Ice Lake in-house, but we do plan to take our Turing cards through the VRS ringer, as well as get some of the other feature-specific tests benchmarked, such as those for DLSS and PCIe bandwidth. The video below highlights the VRS test, with good examples of where a scene could be impacted:

This actually looks to be an ideal test for this sort of feature, and we’re eager to get it tested and see how it scales across our range of GPUs. While this particular UL test is built around DX12, NVIDIA says that VRS can also be done in Vulkan, as well as DX11 with its own API.