When thinking of a quality game engine, names that come to mind usually include Source, iD Tech, Unreal Engine, CryEngine and others, but rarely do you hear the name “Unigine”. The company started in 2005, and since then, have brought on well over twenty licensees who have either used the engine in a released product, or are currently using it in their development. By looking at how the company’s clients are using it, it’s easy to see that Unigine has huge potential, and might just become a big name in the near-future.

I’ve dabbled with Unigine’s benchmarks in the past, including the gorgeous “Tropics” which supports both DirectX, OpenGL and numerous other graphics features, and I’ve been impressed. But, a release the company made just over a week ago is even more impressive. Titled “Heaven”, it’s the world’s first benchmark that supports DirectX 11. This means it shows off the advanced tessellation technology, which seems to be a focal-point for any DX 11 argument. There’s also support for DirectCompute and Shader Model 5.0.

Also included are some key features from DirectX 10.1, such as SSAO (screen-space ambient occlusion), which has the potential to greatly enhance shadow quality for improved realism. Combined all together, the benchmark shows just what DX10.1 – 11 are capable of, and let me tell you… the results are outstanding. The company has posted a before and after video at YouTube that shows the improvements tessellation can make, and I’m sure you’ll agree with me when I say, “Whoa!”.

One of the best features might be that this isn’t a benchmark that simply flies through a scene and lets you watch. Rather, it’s interactive, so you can see the before/after differences yourself, in real-time. “Heaven” is also completely free, and you can download it off the official site. I’ve yet to test it, but I plan to later today. Just be aware that if you want to take advantage of the DX11 features, you’ll need a capable card (ATI’s Radeon HD 5000 series are currently the only cards to support it), and also either Windows Vista or 7. 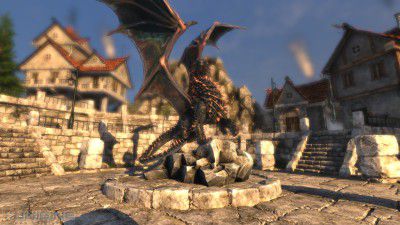 New benchmark grants the power to unleash the DirectX 11 potential in the gift wrapping of impressively towering graphics capabilities. It reveals the enchanting magic of floating islands with a tiny village hidden in the cloudy skies. With the interactive mode emerging experience of exploring the intricate world is ensured within reach. Through its advanced renderer, Unigine is one of the first to set precedence in showcasing the art assets with tessellation, bringing compelling visual finesse, utilizing the technology to the full extend and exhibiting the possibilities of enriching 3D gaming.