Texas likes to do things big, and its latest supercomputer reiterates that. Developed by the University of Texas at Austin, the new Frontera supercomputer is unlike most others, as it’s comprised of two different subsystems. The primary is built by Dell EMC, and uses Intel Xeon CPUs, while the second is built by IBM, and uses POWER9 CPUs. Both also happen to include Tensor Core-equipped NVIDIA GPUs.

Dell EMC’s portion of Frontera uses Intel Xeon Platinum 8280 CPUs, equipped with 28 cores a piece and operating at 2.7GHz. Alongside those chips are 360 NVIDIA Quadro RTX 5000s, built on the latest Turing architecture, with each offering 16GB of GDDR5 memory. IBM’s subsystem piles on another 448 NVIDIA GPUs, this time of the Volta-based Tesla V100 – which we’d assume would be the 32GB model, not 16GB (both use HBM2 memory). 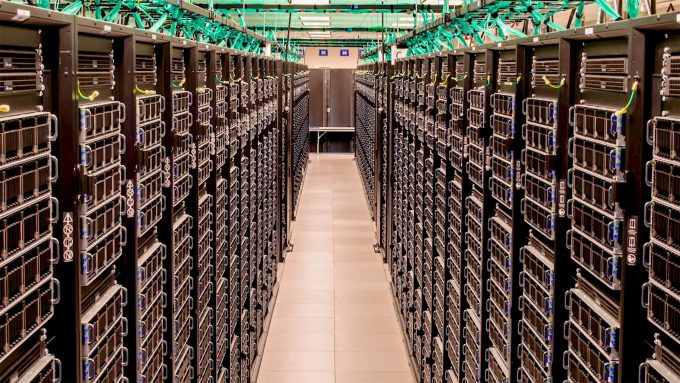 Frontera supercomputer at University of Texas

All told, Frontera peaks at 23.5 petaflops single-precision, and 38.75 petaflops double-precision. NVIDIA says that the GPU subsystems add another 11 petaflops to that, ultimately rounding out what’s going to become a vital deep-learning / AI computing beast.

Some supercomputers have dedicated customers, but Frontera is academic, and thanks to its specs, it has become the world’s fastest. For overall rankings, Frontera ranks fifth, with the NVIDIA-powered Summit supercomputer still glued to the #1 position. Dozens of research teams have already made use of Frontera in recent weeks, and thousands more researchers are expected to benefit over time.

NVIDIA provides a few examples of what Frontera will be used for. With astrophysics, researchers regularly need to pore over 100TB+ of data, something that top quality inference performance can help out greatly with. Other purposes include research for disease, medical abnormalities, drugs, earth sciences, and even city planning.

NVIDIA’s blog post on this launch is titled “Frontera’s New Frontier”, which could be a bit of a jab at the Frontier supercomputer announced in May. That one is built entirely using AMD CPUs and GPUs. Meanwhile, “Frontera” really sounds like the name of a magic spell in Final Fantasy to us, but alas, it’s just a name. It’s what’s inside that counts!