For some, flying is an absolute joy. You get to chill on a bus 30,000+ in the air while reflecting on a book, work, or whatever happens to be outside the window. For others, flying can feel more like an ordeal, where the thought of being stuck on a plane for six solid hours is the furthest thing from awesome. Add ignorant patrons, and flying can feel like a circus pretty easily.

Whatever your thoughts on flying, there’s a truly strange game that may or may not cater to you: Airplane Mode. Inspired by Penn & Teller’s Desert Bus, which was featured on the Sega CD Smoke And Mirrors release, Airplane Mode pits a passenger in an airplane seat for six real-time hours. There’s no weird angle here. You just sit on a plane for six hours and wait to see what does or doesn’t happen.

Created by Hosni Auji, and published by AMC, this game revolves around a cross-Atlantic flight with a passenger (stuck in coach) who will take in the sights and sounds during the entire flight. The player will enjoy take-off and landing, probably ignore the safety demonstration, and fill up on grub during meal service. All the player will have on them is a carry-on bag complete with headphones, book (with real crosswords and Sudoku), pen, and charging cable, with uncertainties including Wi-Fi hiccups and bad weather. 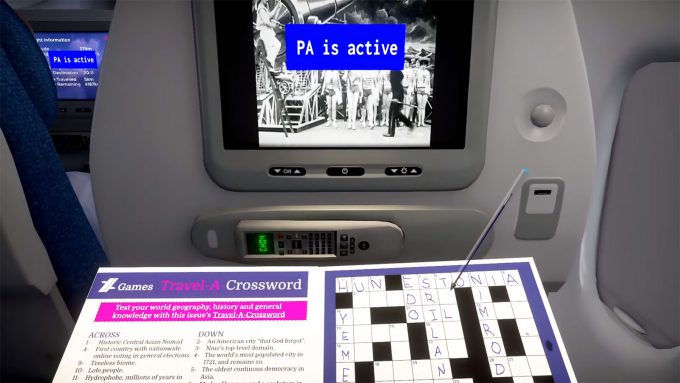 If this is to be an authentic experience, there really should be a random event that will see the passenger behind you put their feet on top of your headrest, bumping into your head on occasion. And let’s be real: there’s definitely some room for a business class expansion.

Airplane Mode‘s announcement coincidences with the ongoing Desert Bus charity event, which can be explored at the official website. If you’re not familiar with Desert Bus, it was a game that simply had players endure a crazy-long drive to Las Vegas, with minimal gameplay that actually makes Airplane Mode seem complex!