Our GPU test bench got an upgrade a couple of months ago, and due to various life happenings (such as moving to another city), it never got used. As it turns out, that was a bit of a blessing, as I never considered the fact that it didn’t have PCIe 3.0, the latest standard that both AMD and NVIDIA are shipping products for. Second, I’ll soon be heading up our hard drive testing, and for that, I needed a good SATA 6 controller – which the X58 motherboard I updated our rig with didn’t have (this is why).

Suffice to say, after the move, I decided to scrap the previous build and update it once again, this time to X79. With this move, I kill two birds with one stone, since I can use the machine for both GPU testing and also hard drive benchmarking. With the update, I felt inspired to talk about it a little bit, since it’s kitted out quite nice. 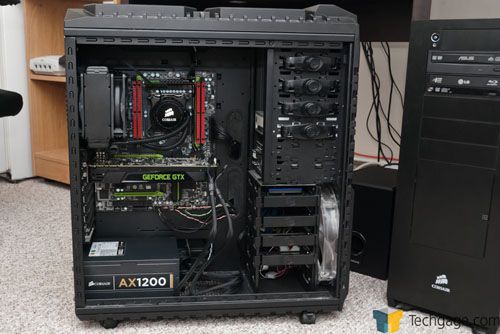 Our test bench has been housed by Cooler Master’s HAF X for a while, and as it provides sufficient airflow and spacing for up to three GPUs, there was no reason to change it. For the motherboard, we chose to use GIGABYTE’s G1. Assassin 2. Given the G1 series is designed for gamers, it seems appropriate to use for our test bench. But one of the biggest reasons I chose it is that it includes good integrated audio and LAN (Creative X-Fi and Killer NIC).

The CPU is Intel’s Core i7-3960X, a 3.3GHz six-core monster, which we’ve overclocked to 4.2GHz (we could go higher, but for the sake of confidence in our overclock, we didn’t want to push the limit too far). Cooling it is Corsair’s H70, a relative monster in itself – and speaking of Corsair, we are powering the beast with the company’s AX1200 power supply, and using its Dominator GT 16GB DDR3-2133 kit for our RAM needs.

I mentioned above that we overclocked the CPU to 4.2GHz, and a screenshot of that and our stress-test can be seen below: 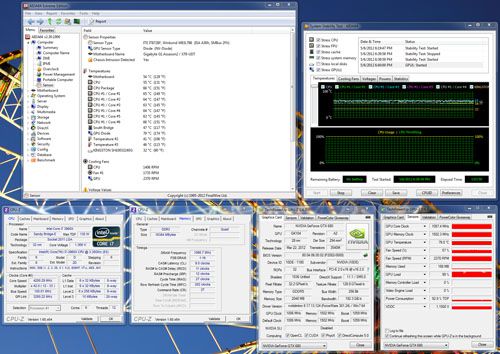 With an ambient room temperature that’s a bit too high for my liking, Corsair’s H70 kept the CPU cool, at about 55°C (about +10°C on the cores). Achieving 4.2GHz wasn’t difficult, as the board simply bumped the voltage a bit to keep things stable. We’ve hard-locked that for the sake of ultimate stability, at 1.375v.

With life calming down, I’m going to be able to benchmark GPUs like no one’s business, and we look forward to deliver some long-overdue GPU content. Stay tuned for that!