I’m not much of an “on-the-go” gamer, but I do appreciate a good handheld console to keep me occupied on a plane, or to help wind me down before I catch some zzz’s. Although I own both a Nintendo DS and Sony PSP, it’s been the latter that has taken the vast majority of my time between them. The games better suit me, and the graphics are unparalleled compared to Nintendo’s cutesy ambitions.

None of this has anything to do with what I want to talk about here, though, and that’s how to copy data to and from your PSP, easily. One of the best things about Sony’s PSP, and even its PS3, is that the company has made it easy to get your data on and off the console, in order to back it up to a thumb drive or even your PC. Until recently, even Microsoft’s own Xbox 360 had trouble with something as simple as this.

The easiest method of copying data off your PSP is to plug it into your PC with a USB cable, and then use the USB mode on the device itself. Your OS should launch the folder, and you can deal with the data as you wish, including copying it off. The problem, though, is that this is inconvenient, and it’s very easy to screw something up when copying data back. None of the games or saved game files you back up are named, but rather have ambiguous names like ‘SCUS94306’, so it’s unwise to go this route. 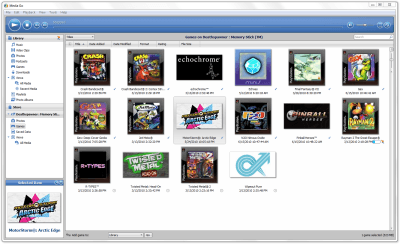 I might be a bit slow to the party, but I recently learned of a Sony proprietary application called Media Go. Since Sony decided to disable the ‘Install Other OS’ feature in its recent PlayStation 3 firmware, I decided to not update my PS3’s firmware at all, or even use it for anything aside from Blu-ray movies. And because a lot of games I download through the PSP itself end up failing at the end, I needed a more reliable solution. That’s where I stumbled on Media Go, and I have to say, my mind was blown. 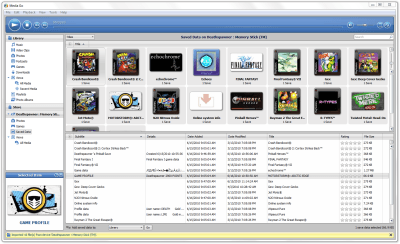 For those like me who have been completely oblivious to Media Go, the best way I can describe it is as being an iTunes for the PSP. You plug the PSP in, and from there you have full control over the installed games, saved data, images, music and so forth. With a couple of clicks from your mouse, you can either copy games on your PSP to your PC, or vice versa. That’s right, if you are running out of memory card space, you can simply back up a large game, then copy it back later without re-downloading. 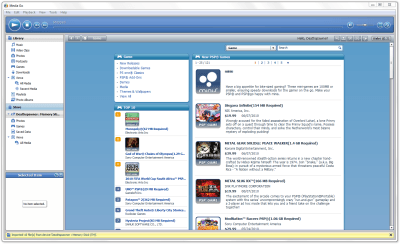 The program isn’t just for backing up and restoring, though, as like iTunes, the program also acts as a storefront to games and other media designed for the PSP. As you can on the device, you can sign into the store, browse the games, add funds to your wallet, and ultimately purchase new media. Once purchased, you have the option to log into the store on your PSP itself and download the files there, or even easier (and wiser, given that the PSP seems to conk out after huge downloads) is to download them through this application. Once they are downloaded, you can click on the respective category in your library, right-click whatever it is you want, and tell it to transfer to your PSP. Taking things off of your PSP and putting it on your PSP works in the same manner. 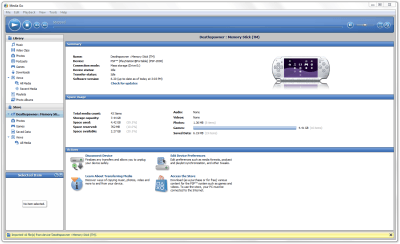 Another sweet feature I have to mention is one that’s not so obvious. Media Go features the ability to take a video and then encode it into a format that will play on your PSP. The process is simple. All you need to do is add folders with the videos you want, right-click them and then tell the program to copy them to your PSP. The program is modest about what it’s doing, but after you give the command, it will re-encode the video to the proper format and then copy it on over. 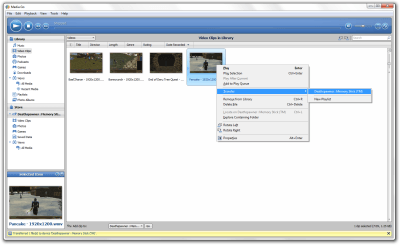 I gave this feature a couple of good tests and was impressed overall. If you copy over a 4:3 or similar video, it won’t be resized, but that’s fine since it shouldn’t be. If you convert a 16:9 or similar video, it should be re-encoded to the exact resolution of the screen, which is nice. All of the videos I copied over were encoded at 2000Kbps for the video and 128Kbps for the audio, so as far as video quality is concerned, little is lacking.

With today’s advanced technology and software, Sony’s Media Go software isn’t exactly ground-breaking. But for PSP users (and also users of Ericsson phones), Media Go is a huge blessing, because it makes negotiating data with the device absolutely painless. In all my use with the application, I ran into no issues to speak of. It just works, and works well.

If you own a PSP, you owe it to yourself to download and install Media Go. You can continue to back up data yourself, which is time-consuming and less-than-intuitive, or you could use this application which handles the data well and makes it easy to backup and restore. It’s a no-brainer as far as I’m concerned!