Rumors of a portable Steam device have been floating around for a while, but with it being such a difficult market to break into, we were holding back our thoughts until Valve made an announcement – if it ever would. Well, today, we learn that the company has in fact been working on a handheld, dubbed Steam Deck, and honestly, we’re not even sure where to begin (in a good way).

Steam Deck is a portable gaming device that’s an all-in-one – you don’t need an external PC to play your games. A quad-core (eight-thread) AMD Zen 2 APU is under-the-hood, and despite that being a last-gen CPU from the company, the eight CUs of the current-gen RDNA2 GPU variety find their way in. With a screen resolution of 1280×800, this chip will have little struggle running games at good detail and frame rates. 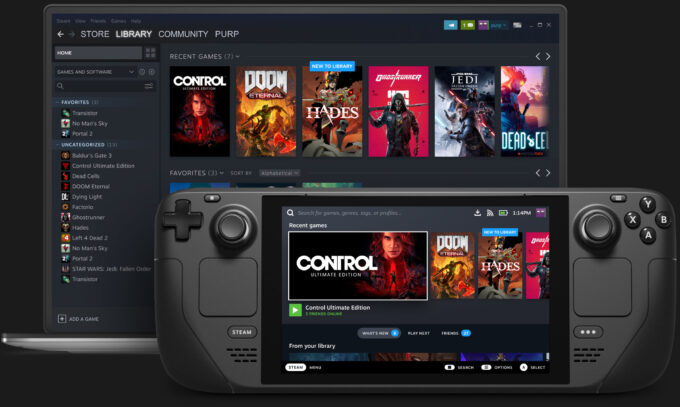 Similar to the Nintendo Switch, the Steam Deck has its gamepad surround the screen on both sides, with a D-Pad and analog stick on the left side, and another analog stick along with XABY buttons on the right. Other device-relevant buttons exist surrounding these, such as the menu launcher, and trackpads on both sides, as well. While not obvious just by looking at it, the Steam Deck even offers 6-axis gyro.

At the back of the unit , there are bumpers and triggers as normal, but also two additional buttons found below those on each side, totaling eight buttons at the back. At the top are audio jacks, the power button, and volume buttons. Heat exhausts appear at the top and back. 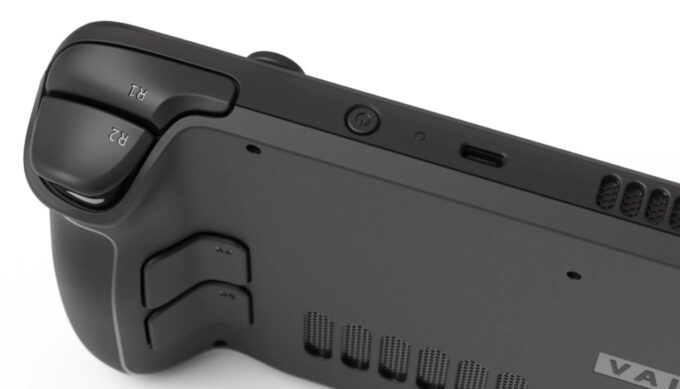 Other features worth noting: the Steam Deck includes 16GB of LPDDR5 memory, running at 5500 MT/s, and storage will include offerings of 64GB eMMC, 256GB NVMe, or 512GB “high-speed” NVMe. In addition, a microSD card is included for even greater storage. We feel like SD cards might be best used as backup (so as to avoid a redownload), because the on-device storage is going to offer the best I/O performance, which will directly impact load times.

To get full detail on the new device, check out Valve’s Steak Deck tech specs page.

Valve is clear that this is effectively a PC, so you can use custom peripherals, and do other things you’d expect to be able to do on a PC. Proof of that is the fact that it runs SteamOS, and sports KDE Plasma as a desktop. Because this device is a PC, you can connect it to a bigger monitor, and plug a mouse and keyboard in, for playing more advanced (or twitchier) titles (but possibly not at higher resolutions due to the integrated graphics). Valve is also going to be selling an official Dock for this purpose, one equipped with Ethernet, HDMI, DisplayPort, and three USB ports.

From what we’re seeing today, we can honestly say what Valve has created here looks really sharp, from both a design and software perspective. Priced at $400, this portable device is a PC that you can take with you. Maybe you’d like to play games on the “big screen” at home, but not leave your game at home. Deck allows you to do that.

If there’s any downside we can see, it’s that the device not going to be available until December. That’s probably a good thing, however, as such an ambitious device could always benefit from extra software dev time.

Does the Steam Deck tempt you?