VEGAS Creative Software has just released the latest versions of its popular video editing suites: VEGAS Edit 19, VEGAS Pro 19, and VEGAS Post 19. As usual, there are a number of changes and enhancements to pore over, but special to this launch is a restructuring of pricing, and the introduction of a subscription model that ties in with cloud storage.

The tie-in of cloud storage is one of the more major parts of the VEGAS 19 update, allowing users to directly upload mobile footage to their cloud storage to access inside of VEGAS, and also access royalty-free stock footage, and even tutorials. To take full advantage of these cloud capabilities, you’ll probably want to snag the official VEGAS Hub mobile app for Android or iOS.

Those who love color grading are bound to dig this update, as some major improvements have been made. A new color grading panel has been redesigned for improved efficiency, and 40 built-in LUT presets have been made available. There’s also new instant black- and white-point detection and correction, as well as expanded RGB color curves. 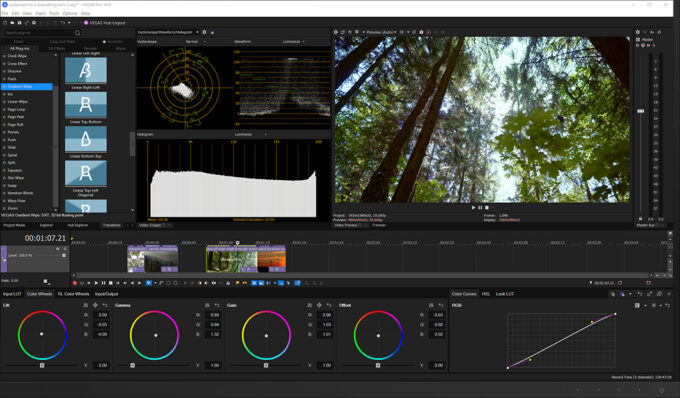 If you opt for the VEGAS subscription, you’ll gain access to text-to-speech, which allows you to convert your written text into naturally spoken voice that can be used for any type of video – though tutorial-type videos seem to be a really good candidate. It’s not mentioned specifically if AI is implemented with this feature, but mention of “intelligent” translation leads us to believe it does.

Speaking of AI, VEGAS introduced its first AI features in VP18, with Colorize and Style Transfer. Those two make a return in VP19, but are joined by Upscale and Zoom. Both, as they may suggest, bumps your footage to a higher resolution while trying to retain as many of the details as possible. Another cool AI addition is automatic scene detection, which can scan a rendered file and create splits, sub-clips and keyframes for you.

Another update that won’t impact everyone but will be hugely useful to those who can use it is the addition of support for Blackmagic’s RAW format. The developer currently considers this feature to be in beta, so your mileage may vary for now.

In addition to all of this, the VEGAS UI itself has also seen some polish, made more flexible to allow users to easily access the controls they use the most. The Project Notes feature now also offers the ability to align with the exact location it should be on a timeline, while each note can now also have its own color and label associated with them.

Now… how about that revised pricing structure?

If you prefer perpetual licenses over subscriptions, you’re in luck, as the VEGAS developers still offer that option. You can purchase the current version of the software outright, and upgrade down-the-road when you feel a major update would be useful. VEGAS Edit is priced at $249.99 USD; Pro at $399.99 USD; and Post at $599.99 USD. 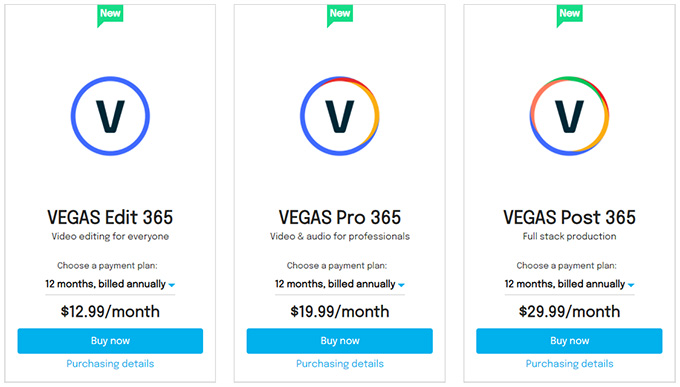 If you’re a professional user of any VEGAS tool, you’ll probably want to go with the subscription model that will ensure you’re always up-to-date with the latest software, and gain a few other features. Those features include some cloud storage, text-to-speech support, and access to royalty-free stock content. Subscriptions for Edit costs $12.99 USD/mo; Pro is $19.99 USD/mo; and Post is $29.99 USD/mo (all on a one-year contract).

You can check out more details on the VP19 update, including a comparison between versions, right here. As you may suspect, we fully intend to dive into VP19 performance soon, and publish content revolved around it. We’ll aim to get this up in the weeks ahead, as we’re currently working to clear out preexisting content – so stay tuned.