Want to Renew a Domain for 400% of its Value? Domain Registry of Canada Can Help

To most who have access to it, the Internet is an invaluable tool – a realization that heightens whenever it disappears due to a power outage or something of the sort. But while the Internet brings a lot of good to the world, it also brings its fair share of bad – and really, there’s so much “bad” that I’d have to write a book to cover half of it. I’m sure it’ll come as a surprise to no one that scams are a big part of that “bad”.

If you’re a domain name owner, and happen to have your personal information (even just an email address) exposed in your public WHOIS file, chances are great that you’ve been the target of a scam. I could never recount the number of emails I’ve received that have tried to lure me into transferring over a domain, or even battling the copyright because someone in another country wants to register the domain name in their homeland. In all cases, emails like these can be safely ignored.

It’s a rare day though when your Internet domain results in an actual paper letter in the mail. For years, I’ve received letters from “Domain Registry of Canada”, and I’ve simply chucked them away. However, when I received one late last week, I decided to crack it open and see what it was all about. As it happens, it’s a scam, and one that preys on the best kind of target: Those who don’t truly understand the mechanics of their computers or their piece of Internet property.

After taking a quick look at the letter, you’ll immediately be able to see why this pays off handsomely for those who send it: 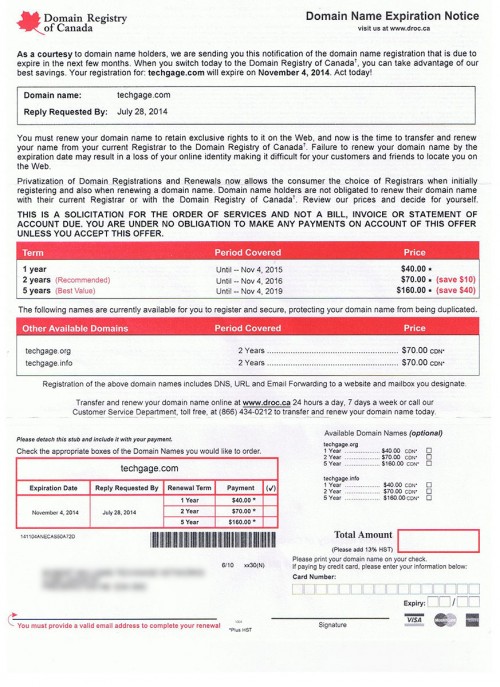 At any given time, I can renew the Techgage.com domain – or any of my others for that matter – for about $10. To register a brand-new domain, it costs about the same. Domain Registry of Canada, meanwhile, charges between 4~7x more than most trusted domain handlers on the Web.

A huge reason this scam is successful (and I know that it is, because I’ve received at least ten of these letters in the past five or so years), is that it looks like an official government letter. Even the envelope is of the same light brown color that tax returns and other official Government of Canada letters come in. And with a name like “Domain Registry of Canada”, it doesn’t just look official, it sounds official.

While those who receive these letters might think the prices are insane, they could feel compelled to give in because they believe it’s the only way they would retain ownership of their domain. This of course isn’t true at all. Your domain wouldn’t be affected whatsoever by chucking these letters in the garbage.

There are few things in this world that fill me with rage like scams do, so I hope this post will help some people avoid being suckered into overpaying for their domains. Or worse – I’d hate to know what it’d be like trying to get your domain out of the hands of these guys. You can bet that once they have your domain, they’re not going to let it go without a handsome fee.

Addendum: It appears that back in 2011, Domain Registry of Canada was banned by the Canadian Internet Registration Authority from selling domains with .ca TLDs, though that didn’t affect the company’s ability to sell domains with any other TLD to Canadians.

More recently, ICANN, the overseer of all things domains, sent a breach of agreement letter to Brandon Gray Internet Services, the company heading-up all of this scammage. While it’s not explicitly clear, the wording leads me to believe that this suspends all of Gray’s business in the interim, at least until the company resolves certain issues within three weeks, or totally fails to comply by October 10.

2. Initiate or accept inbound transfers of Registered Names for any TLD.

It’s noted in these letters that suspension notices must be placed on affected websites, although at this time it seems only the primary one, called NameJuice, reflects that. 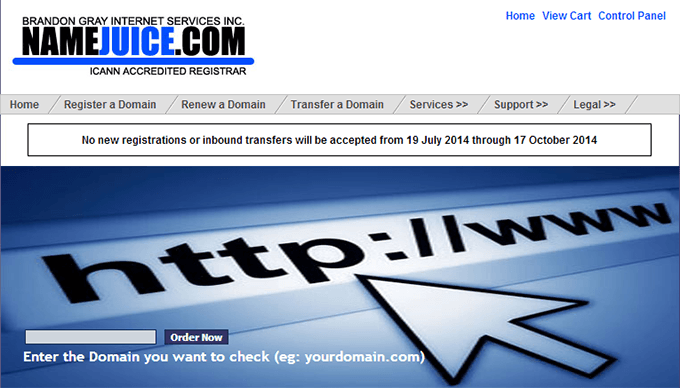 Let’s hope that this is the beginning of the end for Brandon Gray Internet Services. Huge thanks to Reddit user mrsix for bringing all of this information to my attention.