Around this time 2009, Western Digital acquired SiliconSystems in their objective to enter the SSD storage market, shortly thereafter releasing their first SSDs. After their initial foray and some further time to integrate and develop SiliconSystems’s IP, Western Digital is back to release newer, more refined challengers to the SSD marketplace.

For the moment there are two new series of SSDs, both using a proprietary and relatively as yet little known controller of WD’s own design. The SiliconEdge Blue will be a MLC-based solid-state drive, and at least for the 256GB drive, will pack a healthy 250/170MB/s read & write speeds, respectively. As expected of any enthusiast grade SSD, the SiliconEdge Blue also incorporates TRIM, NCQ, and SMART support along with a three year warranty.

The second series is the SiliconDrive N1x which is an SLC-based drive targeting the Enterprise/Server market exclusively. This drive focuses on longevity over raw performance but still packs a respectable 240/140MB per second transfer speeds. While the 128GB Edge Blue is rated to last for five years with 21GB/day writes, the SLC N1x seems to defy reality with a five year service life rating based on a whopping 702GB of writes per day. To match that larger figure, the N1x will ship with a more measurable full five year warranty. 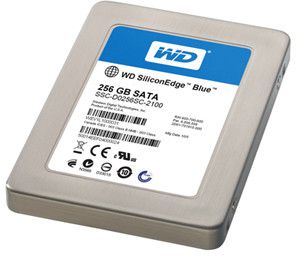 Another new feature Western Digital is proudly showcasing is FIT. Western Digital has put together a “Functional Integrity Testing” lab that has put in over 130,000 hours testing just the SiliconEdge Blue drives in systems ranging from netbooks to RAID arrays, spanning every Windows OS within the last 9 years in addition to Linux just to round everything out! If that doesn’t sound impressive, then perhaps the extra bit of info that these drives have gone through over 40 firmware revisions before WD felt they were FIT to be released!

Interestingly, the performance numbers and 4K Random Read/Write IOPs are very close or even matching those of Intel’s second generation SSDs that set first the benchmark for all other SSDS to be judged by. With almost double the write performance of Intel’s G2 drives (and double the write throughput of the 80GB G2 model) these drives are looking rather appealing, and have the potential to be a solid alternative as long as the price is right.

That brings us to the only real bleak point on these drives, and that will be MSRP prices with the smallest SiliconEdge Blue 64GB SSD starting at $280. Going up to the 128GB-sized drive drops the price per GB ratio down to a more bearable ~$4.15 per gigabyte, but even so this puts it at price parity per GB with SSD’s such as the Vertex LE and RealSSD C300 solid-state drives. Once these drives reach retail, street prices may drop. Still, if pricing isn’t a concern, and your drive brand of choice is Western Digital, then there is a new player in the SSD market to choose from!

WD SiliconEdge Blue SSDs, in capacities up to 256 gigabytes (GB), feature a native SATA 3.0 gigabits per second (Gb/s) interface with read speeds up to 250 megabytes per second (MB/s) and write transfer rates up to 170 MB/s. Fast and rugged, WD SiliconEdge Blue SSDs accelerate application performance and deliver maximum tolerance for drops, shock and vibration along with silent and low-power operation.