Two new enterprise storage hard drives were announced by Western Digital, launched under the Ultrastar range. Initial reports had speculated that these were WD’s first entry of MAMR drives into the market, but so far, no official word has been given.

These new drives come in the form of the Ultrastar DC HC550 CMR, with densities up to 18TB, and the HC650 SMR, with 20TB of capacity. These are both nine-platter helium filled drives, with the main difference being the HC550 using Conventional Magnetic Recording, and the HC650 using the Shingled method.

Despite the ever falling prices of solid state drives, they still can’t quite match that of conventional hard drives, especially in data centers with enormous density requirements for all that cloud storage and backups. In order to keep up with demand, new methods for squeezing more storage space into these drives had to be developed. 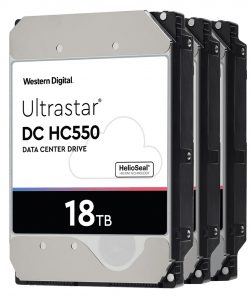 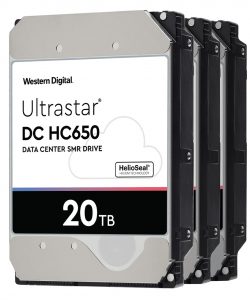 For the last few years, HDD capacity has come from a number of advances in storage technology, with pros and cons coming from each of them. The two big ones have been helium filled drives, which allow for more platters to be fitted inside a drive due to less drag on the motor, and Shingled Magnetic Recording, an overlapping of data caused by a smaller read head. However, both of these techniques have been stop-gaps for the next big push in storage tech, that of energy-assisted recording methods, Seagate’s HAMR, and WD’s MAMR.

It’s worth reading an article we wrote two years ago that covers both MAMR and HAMR techniques (short version, one uses lasers, the other uses microwaves). WD’s bold claim at the time was to expect 40TB hard drives by 2025, just 6 years from now, and these new 18TB and 20TB hard drives would be the first step down that path. However, WD is not explicitly calling these new drives MAMR, but just ‘energy-assisted’.

Perhaps there is another method being used, but in any case, we expect more details from WD when these new drives are officially released some time early 2020. The drives are currently being sampled to close partners for the time being.