The high density storage market has become a rather bizarre mix of technologies and sizes over the last couple years. Desktop hard drives have remained at the 6TB level for a while, with servers making use of 8TB, and in some cases 10TB densities. WD today announced a new enterprise drive that allows for 10TB densities without using the SMR method, sticking to standard industry PMR write methods.

What makes this news so interesting? The catch with high-density drives is that they make use of a mechanical trick to better use the available platters by overlapping data. The method in question is called SMR, or Shingled Magnetic Recording. The read head is half the size of the write head, allowing for a smaller surface area to be covered, but since the write head is still full-sized, it can overlap the previous track. This increases storage density considerably, but it comes at a cost – speed and a new standard.

SMR drives can not typically be used natively by the OS or disk controllers, and instead often require extra software and/or firmware updates. This makes their broad adoption limited, since the drives are not drop-in replacements for the far more ubiquitous Perpendicular Magnetic Recording (PMR) method. In addition, due to the overlapping data, any rewrites require subsequent tracks to be rewriten too, significantly slowing down write operations. The end result is that SMR drives are meant for archiving, and not day-to-day operations. 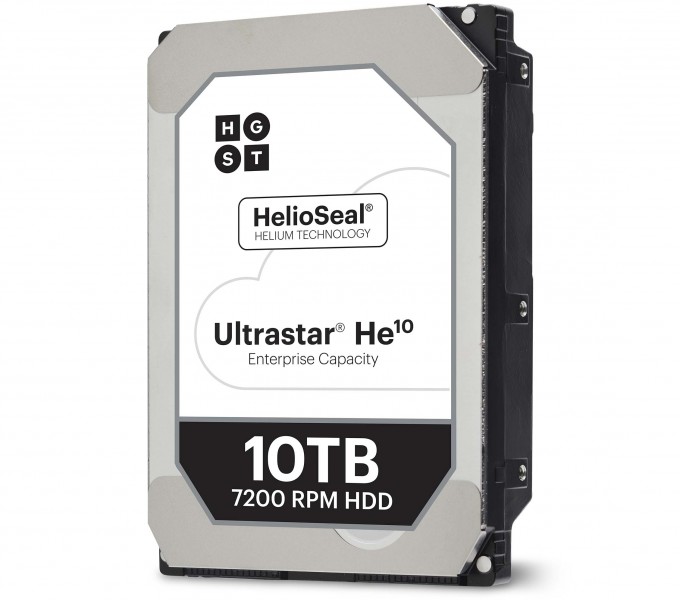 WD’s latest enterprise drive offers 10TB densities using the industry standard PMR method, and as such is a full drop-in replacement for any standard hard drive. The drives will be released under the HGST Ultrastar brand as the He10. The other notable feature being the drives are filled with helium, rather than nitrogen/air.

The benefit of using helium is that it’s less dense than air, putting less strain on the motor. End result is a five or six platter drive that can spin up to 7200 RPM on less power, while improving reliability of the drive (2.5 million hours MTBF) – including a 5-year warranty. WD states the drive can achieve a power efficiency of 0.5 Watts per terabyte (reading the notes, this is at idle), which is 56% less power than the previous generation.

In addition to the helium, these new drives support both SATA 6.0GB/s and SAS 12Gb/s. The cache is just as impressive as the drive density, with 256MB made available. Other enterprise features are available with instant secure-erase and self-encryption over SATA with TCG.

Pricing hasn’t been announced just yet, but we’ll update when it becomes available. Because the drives don’t use SMR, it means that home-built NAS systems should be able to support these new drives, with support from pre-built NASes coming soon with a firmware update.