Soon to replace the current generation of WD Re drives, the new WD Gold series aims to better tune itself to the requirements of datacenters with an assortment of features and lower power. The launch brings three new capacities of 4, 6 and 8TB, each geared for slightly different workloads rather than just pure price per GB.

There is a great deal of focus on power, as all three models have improved electronics to make them more efficient, 15% better than existing Re drives. They will all be 7200 RPM and have 128MB of cache as well. The 8TB drive, and the only one out of the set, will feature HGST’s HelioSeal technology, using helium instead of air inside the drive, further improving power efficiencies while reducing the load on the motor. It should be noted though that all three models have an MTBF of 2.5 million hours, and not just the helium model. 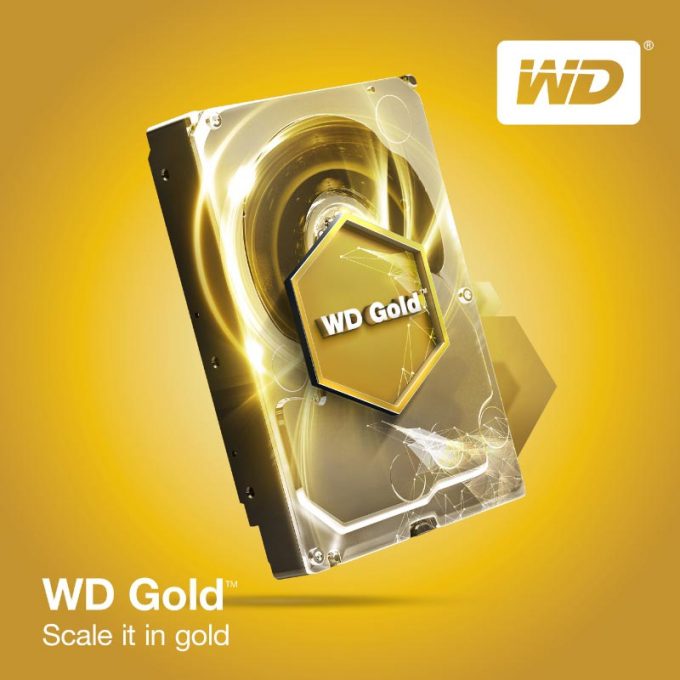 Since these drives are meant for databases, they are tuned similarly to WD Red drives, in that they have limited retry error correction, preventing RAID arrays from ‘failing’ due to timeout when the HDD hits an error. On top of this is something called RAFF, which is meant to protect the drive from vibrations, increasing its accuracy (it senses the vibration and adjusts the drive head to compensate in real-time).

Since these drives are again, performance based, they do not make use of SMR, or Shingled Magnetic Recording, but instead uses the more common PMR method. One oddity with these drives is the lack of SAS, as they are SATA 6Gb/s only at this point. Rated for 24/7 use and workloads up to 550TB a year, with a 5 year warranty, these WD Gold drives are built to last.