While the rest of the world is glued to the latest and greatest SSD reviews, there are certainly a great many enthusiasts resisting the urge to splurge. With low densities and high prices, SSD technology is just not in a place that makes people comfortable with parting with their hard earned cash. Magnetic storage is still not only viable, but it is also still very necessary for long term storage needs.

Western Digital has long ruled the high-end hard drive scene with the Raptor and its current successor the VelociRaptor. With 10K spindle speeds and ultra low seek times, no one can deny they are the bleeding-edge of the storage world available for the average user. With the advent of SATA 3.0 it is only logical that the latest release take advantage of the extra bandwidth available.

Today marks the day that the WD VelociRaptor 450GB and 600GB drives begin shipping. The main “complaint” about the previous generation 150GB and 300GB drives was the lack of overall storage vs. the price per GB. Coming in at $299 USD and $329 USD respectively, the new SATA 3.0 variants are poised to put that behind them and march into the future.

SATA 3.0 has not been all that well received as of late mostly due to the fact it mainly benefits SSD technology. However, this latest release is slated to take advantage of this increased bus speed and offer a 15% increase in performance. The cache has also been increased to 32MB to further enhance performance.

With its IcePack mounting frame, Rotary Acceleration Feed Forward and NoTouch technologies also on board this drive is feature-packed as well. As the VR is a 2.5″ drive by design, WD took advantage of building the large aluminum 3.5″ adapter to wick away extra heat making this one of the coolest drives available. Rotary Acceleration Feed Forward (RAFF) optimizes operation and performance when drives are used in vibration prone chassis. NoTouch ramp load technology ensures the recording head never touches the disk media keeping wear to a minimum.

Western Digital claims immediate availability of these drives, so if you can’t find them at your favorite e-tailer right now, you should be able to before the weekend (hopefully). 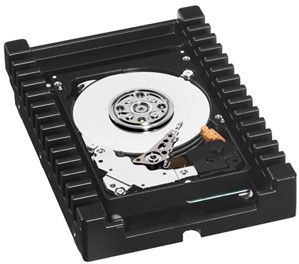 LAKE FOREST, CALIF. – Apr. 6, 2010 – WD (NYSE: WDC) announced today that it is now shipping WD VelociRaptor 450 GB and 600 GB hard drives, the next generation of its 10,000 RPM SATA family of hard drives. The new WD VelociRaptor hard drive is designed for blade servers, high-performance PCs, Mac computers, professional workstations, as well as 1U and 2U rack servers that require a balance of high performance and capacity. As the only 10,000 RPM SATA hard drive on the market today, and a favorite amongst enthusiast and enterprise groups, the WD VelociRaptor hard drive now comes packed with twice the capacity and up to 15% performance increase over the previous generation.