What’s UEFI, and Should You Care?

As Intel prepares to launch its Sandy Bridge microarchitecture next month, we’re all preparing to see what it’s going to bring to the table in terms of features and performance. On the platform side of things though, there’s going to be something else to look out for… UEFI, also known as the BIOS replacement.

I have to admit… though I do love seeing brand-new CPU architectures get pushed out the door, I’m super-excited to see what UEFI implementations we’re going to be seeing. After all, one of the remnants of early computing is the BIOS, and due to its multitude of limitations, it’s time to see it go. UEFI can’t be considered “new”, as the first specification was drafted in 2000, but with the Sandy Bridge launch, it’s going to be the first major push on the PC desktop.

What is UEFI, and why should you care? You should care because UEFI is built for modern computing, and rids limitations put forth by the old-school BIOS. One of the few improvements is the ability to use hard drives larger than 2TB, and in addition, we should be seeing faster boot times, support for IPv6 boot modes, and because there is more space allowed to be used, we’ll see new features as well.

Some might believe that current BIOS implementations are perfect from the “simple is better” standpoint, but I’m not so sure. I can’t talk about upcoming UEFI implementations until embargoes lift, but it’s clear that this is an upgrade we need, and UEFI has the potential to make going into the BIOS a more welcoming experience.

From a features standpoint, UEFI can be bundled with universal drivers or even applications, so I’m sure it won’t be uncommon to see companies such as ASUS, GIGABYTE and MSI bundle more robust overclocking solutions right at boot, which should be awesome. At the same time, UEFI could no doubt even include a Web browser for those vendors who opt to include one. I’m not sure the space limitations of UEFI, if there are even any, but I think we should be seeing some interesting things in the years ahead.

If anything, it will just be nice to see a major change like this, because we’ve all been using the same ole BIOS for ages. UEFI might just prove to be a breath of fresh air. 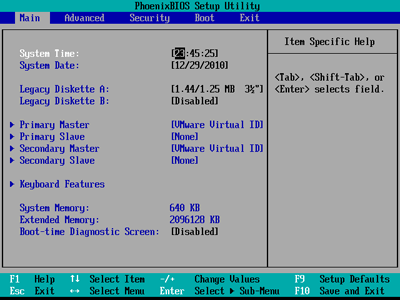 (Soon, this should be a thing of the past.)

UEFI (Unified Extensible Firmware Interface) will be a specification detailing an interface that helps hand off control of the system for the pre-boot environment (i.e.: after the system is powered on, but before the operating system starts) to an operating system, such as Windows* or Linux*. UEFI will provide a clean interface between operating systems and platform firmware at boot time, and will support an architecture-independent mechanism for initializing add-in cards.