ZOTAC has long been offering some of the most attractive mini-ITX motherboards around, and its just-released D2700-ITX WiFi Supreme looks to carry on that tradition. It’s designed for those looking to build an HTPC and don’t want to go overboard on hardware, but don’t want to be lacking, either. 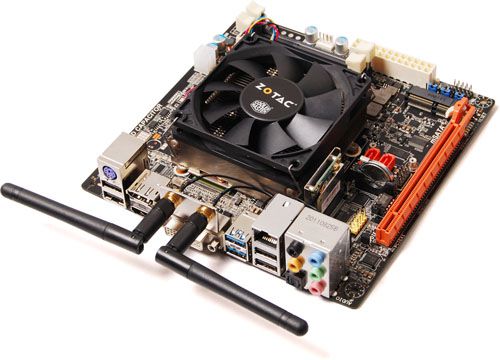 The board comes equipped with a dual-core Atom (D2700 as the name suggests), a 2.13GHz offering. For graphics, there’s an NVIDIA GeForce GT 520 512MB. It’s not a gaming card by any stretch, but it’s perfect for HD content. For the sake of saving on space, the board doesn’t support full-sized DIMMs, but rather SO-DIMMs for mobile platforms. Officially supported speeds are up to DDR3-1066 with combined densities up to 4GB.

For those who might want to do a bit of gaming with this board, a full single-lane x16 PCIe slot is included. Though, given Atom limitations, there’d be no need to toss a mid-range or higher card in here.

As the name suggests, the board comes equipped with dual-antenna wireless supporting 802.11n. For other wireless needs, Bluetooth 3.0 is also included.

One of the more interesting aspects of the board is its huge CPU cooler – unusual for an Atom board. There are no RPM specs on the fan on ZOTAC’s site, but it’s assumed that it’d be a near-silent offering, given the board is designed for HTPC use. Overall though, this looks like one of the best ITX boards ever to be released.