Like the RX 6600 XT, this new non-XT model still includes an 8GB frame buffer, although its effective bandwidth is a bit lower, at 224GB/s (vs. 256GB/s). With a light chopping off of its core count, the RX 6600 naturally draws less power, spec’d at 132W board power, vs. the XT’s 160W. Considering that NVIDIA’s GeForce RTX 3060 is spec’d at an even higher 170W, the performance match-ups should be made all the more interesting. 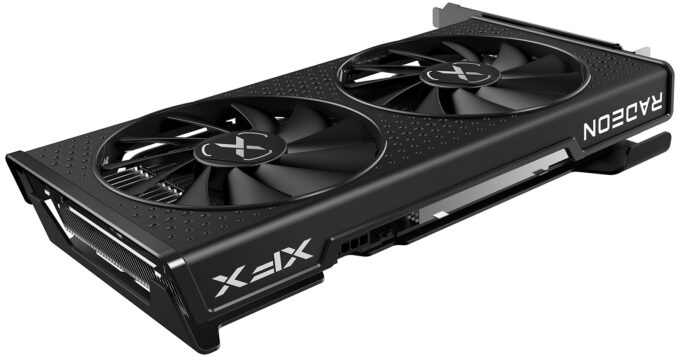 AMD targets its new RX 6600 squarely at 1080p gaming, especially high-refresh esports 1080p gaming. As we’ll see in the results, however, the card will be able to handle 1440p in many cases, as well, especially if you are willing to tweak the detail levels.

As always, AMD’s board partners are going to have a plethora of different models to choose from. This is AMD’s second current-gen launch that doesn’t revolve around a reference design, so the card we received for testing comes from XFX. Pictured above, the SWFT 210 edition sports a clean black design (and is really lightweight to hold), with a large heatsink and dual fans to help keep the heat situation modest.

And with that, the RX 6600 is similar in specs and features to the others in AMD’s current line-up, so there isn’t too much more to talk about before getting into the performance results. So, let’s get to those, and comment more on this particular model throughout the review.

All of our testing is completed using the latest version of Windows (10, 21H1), recent graphics drivers, and up-to-date games. Normally, ahead of a launch like this, we’d retest the chosen collection of GPUs with the most up-to-date drivers. This go-around, with the goal of saving time (and tedium), we sanity checked each and every game with the latest driver for both AMD and NVIDIA, and discovered similar performance across-the-board, no different from typical benchmark variance.

Most of the performance seen here was published in our AMD Radeon RX 6600 XT launch article from a couple of months ago. Since that publishing, Destiny 2 received an anti-cheat update that broke our frame capturing capabilities, so we swapped that game out for the newly-released Far Cry 6 instead.

Thanks to the substituting of Destiny 2 with Far Cry 6, we have a lopsided favor of AMD-sponsored games appearing here, so we’ll be revising our suite shortly to swap out some other games (mostly to modernize the selection), and flesh things out better that way.

Note: You can download all of the tested setting images at once here (ZIP, 8.2MB). 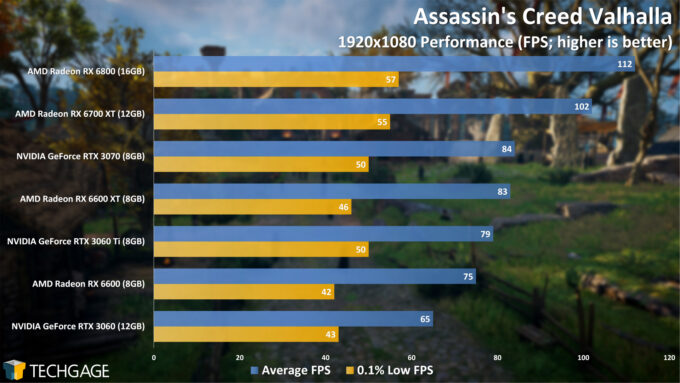 Compared to its GeForce competition, Radeon’s strength in Valhalla is so strong, that you’d imagine it were an AMD-sponsored title – despite the fact that Assassin’s Creed games have generally favored NVIDIA’s GPUs in the past. Since Valhalla‘s launch, we’ve seen Radeon keep a bit ahead of GeForce in each particular Radeon match-up, and that continues to hold true here.

Impressively, AMD’s new $329 SRP RX 6600 performs 15% faster than the RTX 3060 with its average FPS in this title, while matching its percentile low. 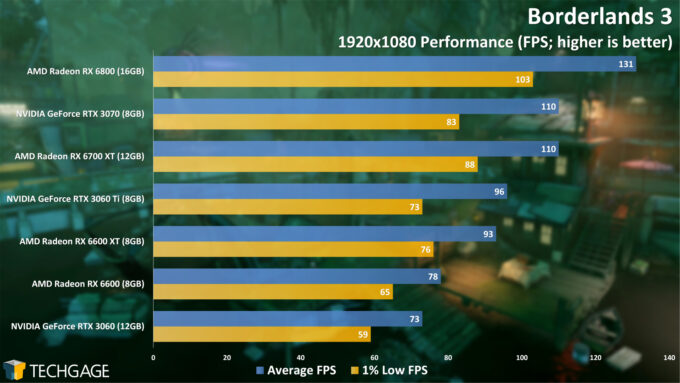 On the topic of AMD-sponsored titles, Borderlands 3 is one, and when you look at the results, it’s not entirely a surprise. Since its launch, Borderlands 3 has favored Radeon cards, although the end price-for-price battles between the vendors generally keep quite close – but still ultimately gives AMD the edge. 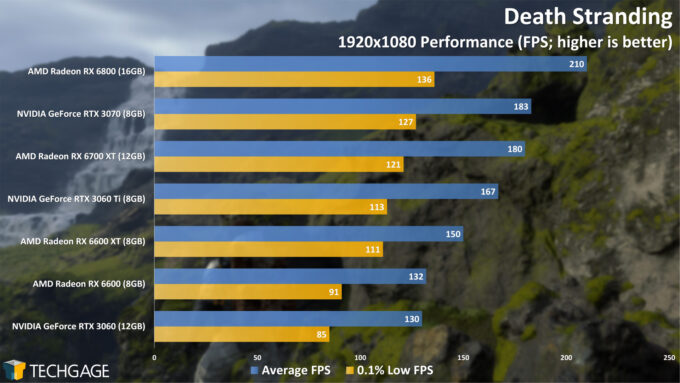 Death Stranding is easily one of the most beautiful games in our tested lineup, and fortunately, it doesn’t require a high-end GPU to enjoy – at least at 1080p or 1440p. This is one title where AMD’s reference results showed the RTX 3060 a couple of frames ahead, but in our testing, the opposite proved true. Still, both the RTX 3060 and RX 6600 perform effectively the same here, easily hitting over 100 FPS, and coming close to that magical 144Hz target for high-refresh gaming. 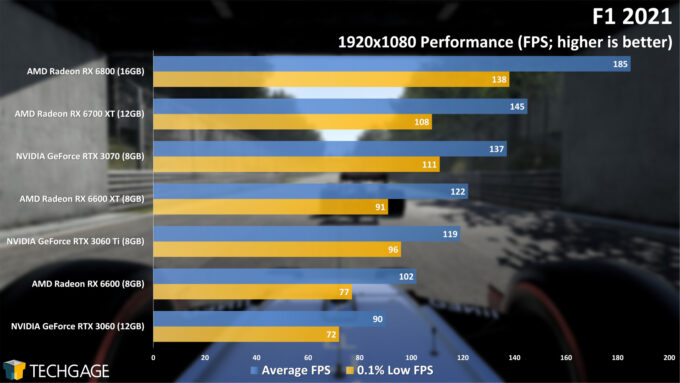 So far, we’re seeing AMD’s new RX 6600 dominate against the RTX 3060, and yes – that will change over the next few games. In F1 2021, however, the RX 6600 performs 13% faster with its average, and delivers a slightly better percentile low, as well. This is another game that doesn’t require high-end hardware to run well, so 1440p is definitely an option here. 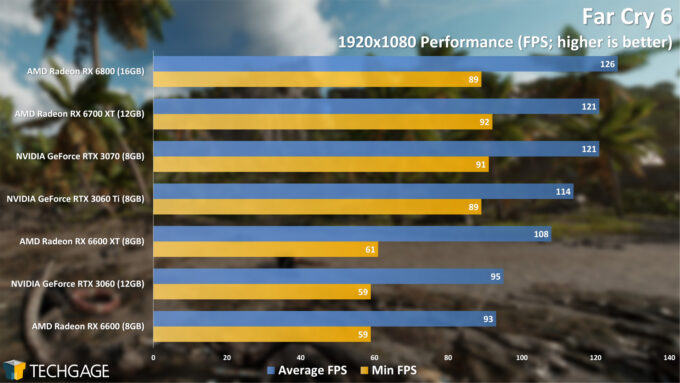 A new entrant to our suite, Far Cry 6 has just released, and as expected, the game is quite beautiful all-around. Based on our perusing of comment sections, it does seem that the game is a little buggy right now, with HD Texture use sometimes resulting in actually worse textures in certain cases. Because of that, we left the setting off for our initial testing, just in case it led to any strange results.

At max detail, outside of enabling the HD Textures, it’s actually NVIDIA’s RTX 3060 that comes slightly ahead of the RX 6600 in this AMD-sponsored title. It’s good to see that sponsorship doesn’t always equate to guaranteed wins right out-of-the-gate. Overall, both vendors seem to be equaled here, with even the comparative RTX 3070 and RX 6700 XT performing virtually identically. 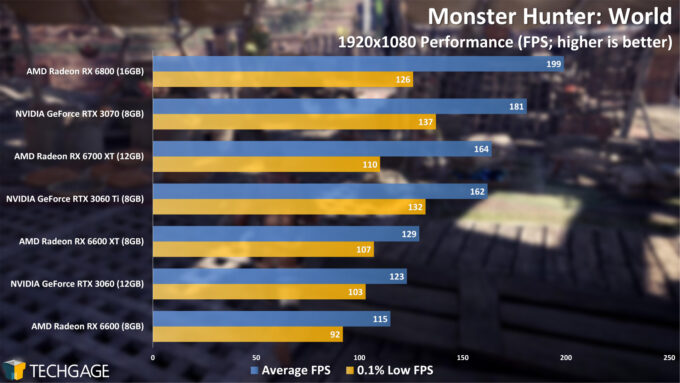 Monster Hunter: World is a title that’s favored NVIDIA hardware ever since its launch, which doesn’t just include the average frame rate, but also the percentile lows. With driver iterations, AMD has helped squash its percentile low issue a bit, although as you can see between these particular models, NVIDIA does still lead the pack. 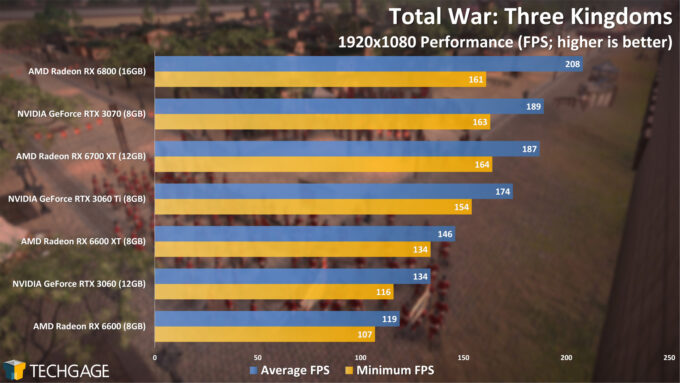 Our collection of tested games include both AMD- and NVIDIA-sponsored titles, but Three Kingdoms is unique in that it’s actually an Intel-sponsored title. While the focus of that sponsorship was with the CPU, we can’t help but wonder how that company’s upcoming Arc graphics cards will handle this game. Fortunately, we’re only months away from finding out. 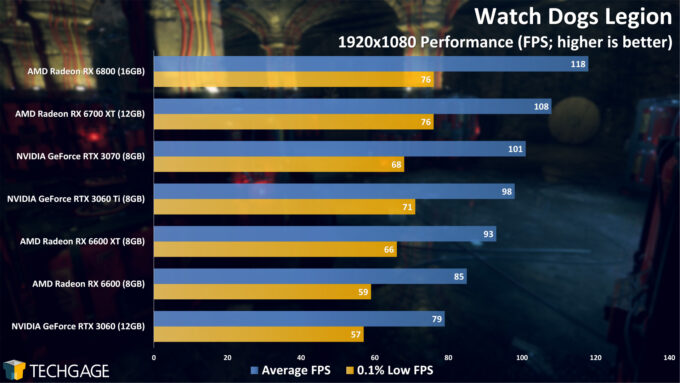 To wrap-up our game benchmarks, Watch Dogs, despite being an NVIDIA-sponsored title, gives AMD’s new RX 6600 the edge over NVIDIA’s RTX 3060. It’s important to note, however, that this is without ray tracing involved, which is a match-up NVIDIA would almost certainly win thanks to its inclusion of ray tracing cores, and not to mention DLSS.

For those interested in synthetic benchmarks, the following page includes a whack of results from UL’s 3DMark and VRMark, as well as Unigine’s Superposition. For the sake of time, we’re going to skip commentary on that page, as the results are interesting from a technical aspect, but don’t always paint a proper picture of real-world gaming performance. If you want to skip those, you can head over to page 3 for power consumption notes, and our final thoughts. 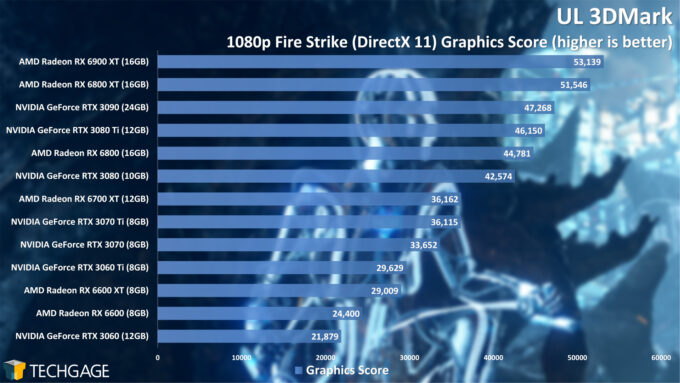 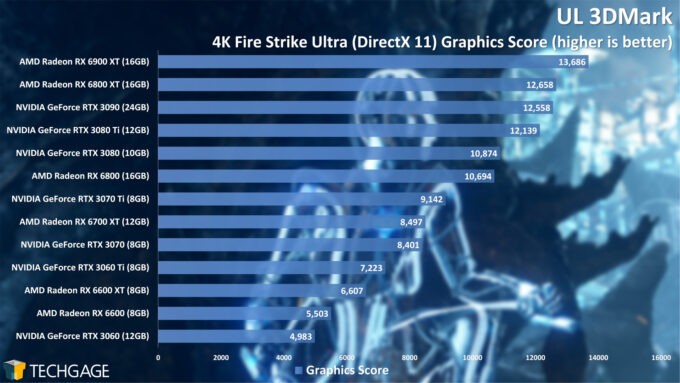 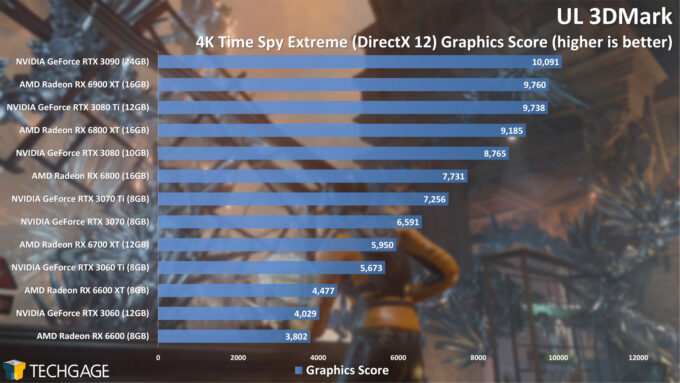 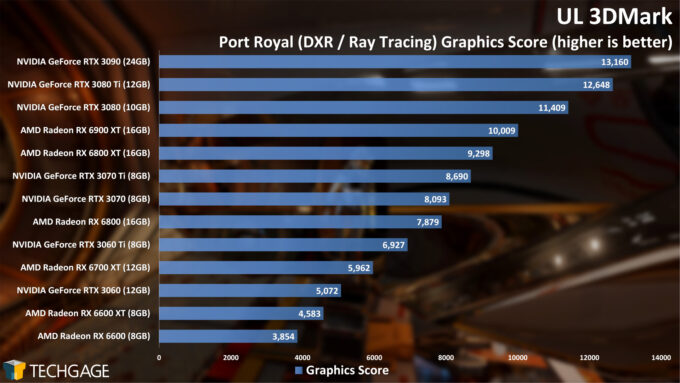 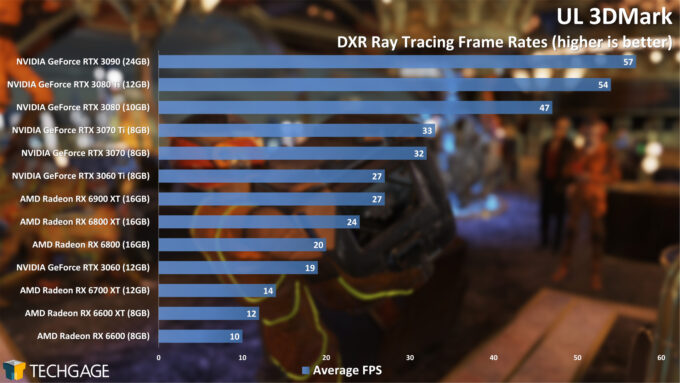 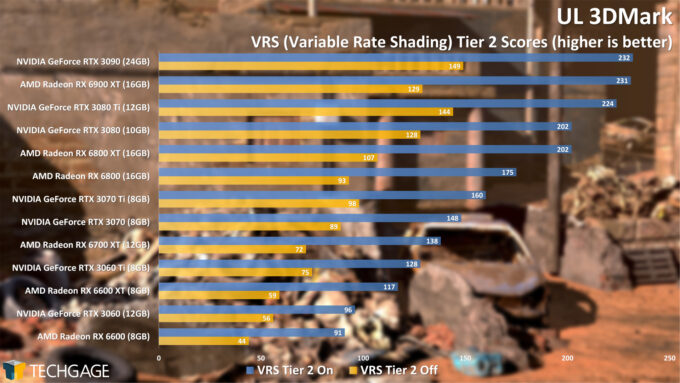 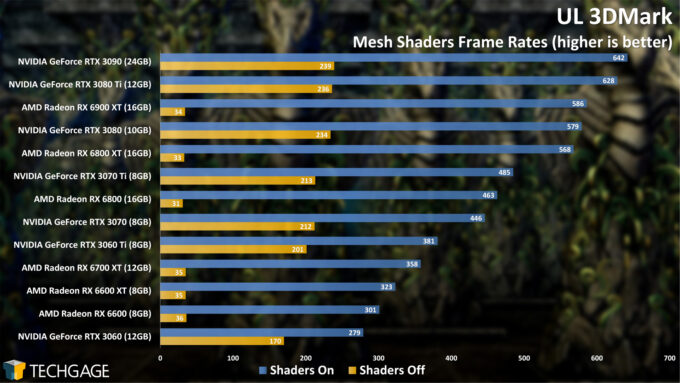 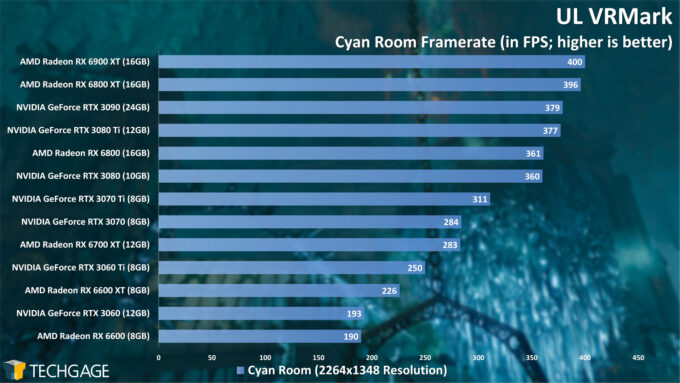 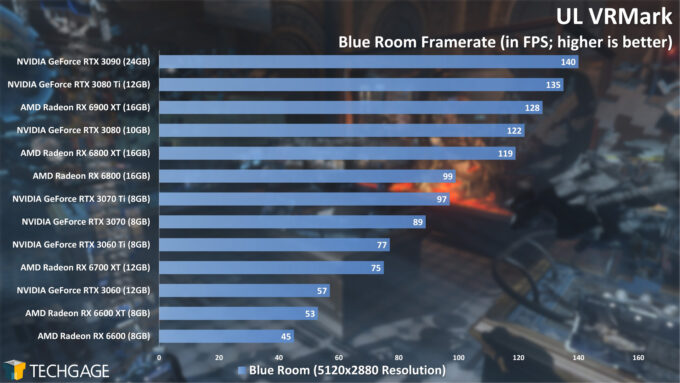 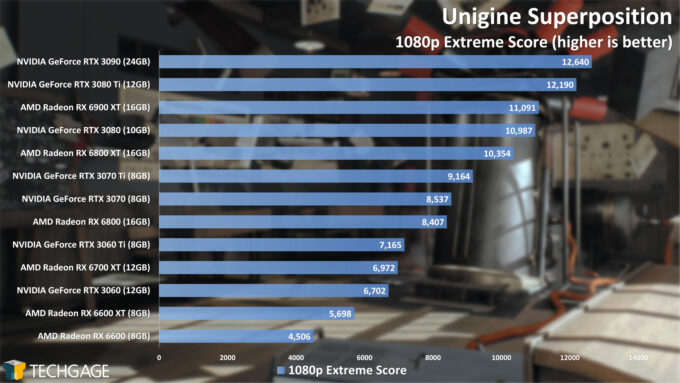 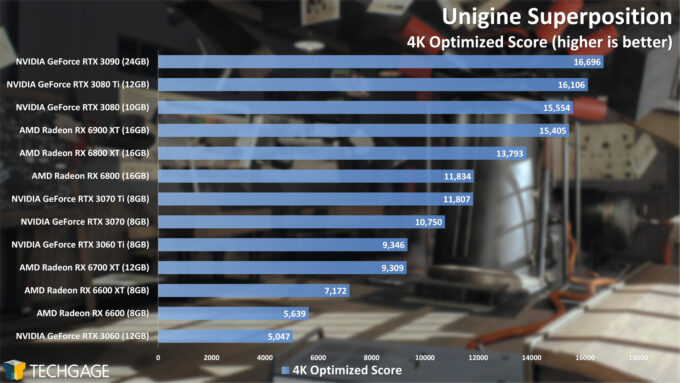 To take a look at GPUs from a power perspective, weâre using ULâs 3DMark Fire Strike 4K stress test, and the PC plugged into a Kill-A-Watt to monitor full system power draw. The PC is left to sit idle for about five minutes, or at least until the PC is idle, at which point that number is recorded. After five minutes of running the Fire Strike test, the load value is recorded (at the same point in the looped test). 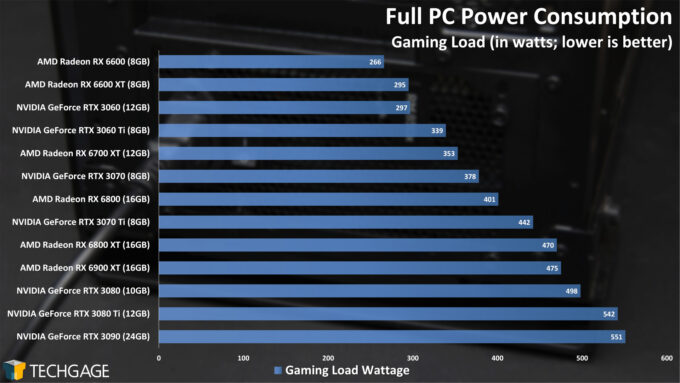 It used to be that AMD’s Radeons could be expected to draw more power than NVIDIA’s GeForces in their appropriate duels, but times have changed, and RDNA2 is actually a really power-efficient architecture. Compared to the RTX 3060, AMD’s RX 6600 draws about 30W less at full load, which is nice to see. On the NVIDIA side, the GPUs include extra cores, such as Tensors and RT, which could be responsible for the additional load, even if they are not actively utilized.

We’ve said it before, and we feel compelled to say it again: this is a weird time to review graphics cards. We don’t even need to explain why, but let’s do that anyway: current graphics card pricing is generally obscene. Exceptions can be made if you are one of the lucky few who manage to find a card available in stock at a brick and mortar for SRP, or at least close to it. Otherwise, pricing on any etail website is likely going to make you question how badly you actually need an upgrade.

When NVIDIA released its RTX 3060 earlier this year, the $329 price tag was attractive – especially for a card packing 12GB of memory. In reality, though, the very second that GPU hit the market, the effective price tag was at least double. Fast-forward these eight months since that card’s launch, and the situation is unchanged. Looking at Newegg and eBay, it’s hard to find that $329 GPU for under $700.

Naturally, AMD’s new $329 Radeon RX 6600 will face the exact same fate. It actually sickens us in a way, because while a card like the RX 6600 (and NVIDIA’s RTX 3060) are solid options, their performance level doesn’t align at all with the price you will likely end up having to pay. We’re talking prices higher than the current-gen consoles for entry-level current-gen PC gaming. 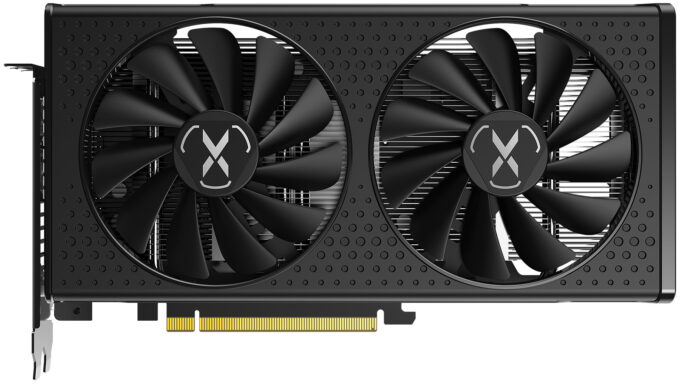 That rant aside, there’s not much we can do about the current pricing; it’s just an unfortunate thing all-around, and it’s even more unfortunate that the price-gouging has already been going on for over a year.

Ignoring the current situation in the market, we can at least surmise the RX 6600’s worth against the RTX 3060 since they do carry the same projected price tag. Overall, AMD’s new card has performed very well across our chosen collection of games. While the RX 6600 ended up placing just ahead of NVIDIA’s RTX 3060 more often than not in our testing, AMD’s own, with an even larger collection, showed things more even overall. AMD has the benefit of offering similar performance at a lower power draw.

The RX 6600 is effectively an entry-level card, but it still offers good performance. We only tested 1080p resolution, but in many of our tested titles, the frame rates soared above 100 FPS. That means the card should also be more than capable of 1440p gaming across the same tested titles. That also applies to the RTX 3060.

From a special features standpoint, NVIDIA’s RTX 3060 is going to gain an edge in overall gaming if we include the use of DLSS in supported titles. Even Death Stranding, tested here, uses DLSS to good effect. Comparatively, AMD’s FidelityFX Super Resolution is a solid competitor, but its supported game count remains modest right now, as does its resultant quality vs. DLSS. DLSS will win most battles if both are compared against each other, so we look forward to seeing what future FSR iterations will bring.

If you are left with any other questions about AMD’s new GPU, please feel free to hit-up the comment section below.