Power supplies are an important part of our PC and should never be overlooked. Antec is one of the top makers in the market, due to their stability and build quality. We are taking a look at their 500W Phantom and see how it stands up to a Dual Core system.

One common mistake when building computers is overlooking the PSU. Most people on a budget end up lowering standards to buy a generic supply, because “all it does it power the system”. If you have been building PC’s for some time, then it’s clear just how important a solid power supply is. I have had generic PSU’s die on me left and right, and even take some components with it. Needless to say, that’s a lesson no one should learn the hard way.

Antec is one of the most popular names in power supplies. Although they can get expensive, it’s because of their extreme stability and superior build quality. We are taking a look at the top model in their Phantom line, which has a lot to offer as we’ll soon find out.

So what does the Phantom offer? You may wonder why they chose to call it the Phantom, and the reasoning is easy. They believe this to be one of the most quietest power supplies on the planet; noise will be nonexistent… or Phantom like. The reason for this is because the supply is designed to dissipate heat better than any other. The entire unit acts as a heatsink with a thick fin design. Since the PSU theoretically acts as a heatsink, there is no need for a fan unless your computer really pushes the load on it. 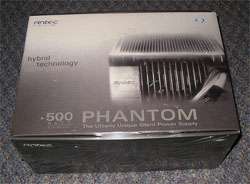 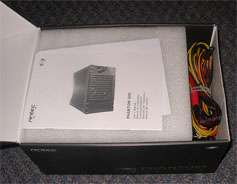 You can choose for the PSU to turn it’s fan on at 40°C, 47.5°C or 55°C. Obviously the lower the temp your PSU is, the better. I left mine at the default for that reason, since it will help prolong the life of the supply. Because of these few optimizations, the supply as a whole will generate up to 70% less heat than a standard one, and will use up to 25% less overall power.

To help add to the stability of the PSU, Antec implements Dual +12V outputs. Since a CPU uses a +12V rail, this is a way to provide clean and steady power to it. The other +12V output would be used to provide power to the other peripherals that make use of it. Dual +12V rails should help stability in overclocking as well, or even CPU’s that are absolute power hogs… like Intel’s ;)

Even though they make no mention of the PSU being SLi capable, it does include two 6-Pin PCI-Express connectors, so you will have no issues at all if you want to set up an SLi or Crossfire system. To add to the ‘cool’ factor of this power supply, there is a bright blue LED strip on the rear of the unit whenever it is powered up.

For those of you who thrive on specifics, here is info you will find useful:

Overall, these specs represent kick ass and it’s a pleasure to have such quality in my system. When I had first powered up the PSU without a PC, it was as I had expected.. dead quiet. Since I threw this in my Intel machine, the low noise won’t help me as much due to the Stock Intel cooler being so dang loud, but it’s certainly nice to have the PSU not add to the fact. During my stress tests with the Phantom, I regularly checked to see if the back fan was running. Not once did I catch it running, which goes to show that the heatsink design does a great job of dissipating the heat before it get’s to that point. It could have been running at certain points without my knowledge, but it’s hard to tell even with your hand in front of it whether it’s actually on or not.

Another thing to mention is that this PSU is very heavy, but as many know, the heavier the PSU is the more likely it is to be better. Heavy duty components will definitely aide in the life and stability of the product. Though I did not weigh it, I would recommend you have a friend help you install it. Not because it’s too heavy, but because it’s heavy enough that when you are ‘screwing’ around trying to get it installed, it is somewhat of an annoyance.

Now that we have all of that out of the way, let’s jump straight into the stress testing.

The system being used has an overclocked CPU (Stock 2.8GHz to OC 3.65GHz) and GPU (Stock 445/1.10 to 490/1.15) in order to help push the PSU further. A variety of tools were used over a three hour period in order to stress the system, including both CPU Cores. Programs were run in no real order, but were immediate after one another. Here is the list I used, in alphabetical order:

There were no less than two tests running at a given time. At one point, Super Pi, 3D Mark 05 looped and HD Tach were running at the same time, which resulted in a very, very slow computer :)

It wasn’t about getting high scores, but rather pushing the system to the best of my ability. The latest version of EVEREST includes an option to log Sensor outputs, which is how I received the Minimum, Maximum and Average results for each rail. Since Motherboard Monitor is pretty much extinct now, I was extremely happy to see that the latest version could do this.

These are some extremely pleasing results. There was only a 0.11 Delta on the +12V rail, which is the best we’ve seen on the site to date. I pushed a lot on the PSU and it performed just as I had hoped. This is definitely one stable power supply.

The Phantom is extreme in two cases.. stability and noise level. As seen in our stress testing, the unit is more than capable of handling our systems load.

Who can benefit from the Phantom 500? If you are keen on keeping a quiet system, then this is definitely your ticket. Even though the Phantom 500 includes a fan, it could easily be considered a ‘fanless PSU’ as you may never, or at least rarely see the fan turn on. A fan certainly isn’t a bad thing; it’s a failsafe in case the unit does get too hot, but is completely silent the rest of the time. If your computer is not that well ventilated though, then the fan will likely operate constantly, which makes this not that appropriate for an HTPC. If you are thinking along the lines of HTPC though, then the Phantom 350 may be a good bet.

This PSU does have it’s share of minor issues though, but that’s all they are… minor. The first may be the price, $160US at NewEgg. While that is a little steep, you are paying for extreme stability and reliability. The build quality is superb, and it counts as a workout when you install it! The only negative thing about the Phantom that stands out in my mind are the cables. The motherboard cable is the only one that’s sleeved, and that’s too bad. The rest of the cables are extremely cluttered and I could not untangle most of them because cables were intertwined at the base. For the price of the unit, it would have been great if all the cables were sleeved and organized properly.

Overall, this is a fantastic PSU that you should consider if you are looking for stability, quietness and the combination of the two. I award the Antec Phantom 500 a 9/10 and our Editors Choice award.

If you wish to discuss this review in our forums, please feel free to check out this thread. You do not need to register to reply to content threads.