When ASUS first launched their Eee PC last October, no one could have predicted what was to come. It was an instant-hit, and inspired other manufacturers to produce their own low-cost netbooks and ultra-mobile personal computers. However, since the beginning, ASUS has led this UMPC race by one-upping the competition with products of superior quality, usability, and ingenuity. The Eee PC 1000HA follows suit, and has much to offer, and little to disappoint.

The 1000HA arrived at our door in an attractive retail box, ready to function. I dissected the packaging and found myself staring back from the attractive, high-gloss finish on the paint of the Eee’s lid. The top-left corner of the lid has a tasteful cursive “Eee” logo. I also found that ASUS provided a small, neoprene-like, zippered pocket for the netbook. The pocket is pretty minimalist in itself, with just a zipper at the top, velvety outside, and Eee logo. Although a bit boring, it’s how I prefer my laptop cases; plain but functional.

The battery comes separated from the machine to prevent any incidental electrical shorts, but it’s truly a breeze to snap on. The battery adds a negligible bit of thickness onto the Eee, but with 6 cells, the thickness can be completely ignored when it comes to battery usage time.

The power brick was fairly plain as well, until I plugged it in. The calming blue LED power indicator on the brick is very bright… so bright that I had to cover it with electrical tape at night to avoid my room from having a dull electric-blue glow. Besides the slightly obnoxious LED indicator, the brick is tiny. About one-third the size of any brick I’ve used previously, it is much better for mobility. When I get to speaking about battery time, however, you’ll realize that you’ll be taking this adapter just about nowhere. The plug on the end of the cable is at a right angle, which is a desired characteristic of an adapter that plugs into the side of the netbook. This lets the cable trail behind the laptop, and doesn’t interfere with left-handed mouse users. 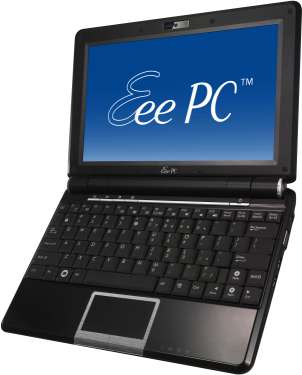 Taking a look at the outside of the netbook, we can see that the Eee has an attractive high-gloss finish. I’ve noticed that it’s a bit prone to fingerprints, but it’s just as easy to clean as it is to smudge. Thanks to a latch-less design, the Eee opens with little effort, but still manages to stay closed when in transit. Lurking around the sides of the netbook, you’ll find a total of three USB ports, one on the left, (near the Ethernet port,) two on the right.

You’ll also discover the audio ports, VGA output, and card reader. Unfortunately, I did not find the PCMCIA or ExpressCard slot I was hoping for. This nullifies most user’s abilities to upgrade their computer, mostly for networking card additions. Lastly, in the far left corner of the Eee PC, there is a fairly sturdy lock port. However, I never needed to use this, since the unit actually fit into one of my larger coat pockets, and even a cargo pant pocket if I was without my coat.

The bottom of the unit is fairly unremarkable, it has one large maintenance panel, and houses the speakers. I’m not sure where any manufacturer gets the idea that the speakers belong on the bottom of a netbook, but surprisingly enough, they sound alright, albeit a bit quiet. 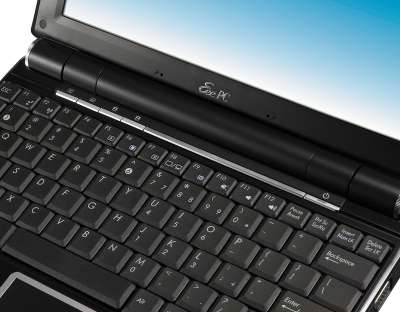 When it comes to the touchpad, ASUS takes a modern approach on the classic two-button device. The pad itself has a matte finish, and is comfortable on the fingertip during use. You’ll also note that the pad is a bit larger than most, and wider. In fact, it’s eerily similar to the touchpad on the MacBook Pro, in more than just size. The Eee PC has a multi-touch-pad. You read correctly. Multi. Touch. This means you can do your usual one-fingered point-and-tap routine, or you can use two fingers to scroll, “pinch” the pad to zoom in, and do the opposite to zoom out. 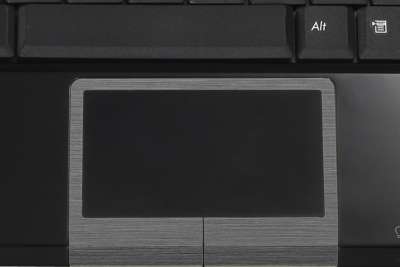 Using three fingers, you can right-click. The software included with the Eee PC allows you to customize the functions as well. However, the multi-touch pad is more of a novelty, and is far from perfection. Often, you’ll find that the pad won’t respond to the first multi-fingered tap or motion. Also, it feels as if the pad is less responsive to single-fingered taps, and if you tap too lightly or too hard, the pad may not respond at all.

The brushed-aluminum left and right buttons are available if you aren’t much of a tapper, but they aren’t perfect either. They’re a bit stiff, and take some getting used to, since they take a little more force than one would be accustomed to, to depress the button.

Using the Eee PC is just like any other laptop. Since I received the Windows XP version, I was already used to the basics. Setup is just like any other Windows XP installation, and it took me less than half an hour to get through everything and get on the ‘net. The 10.2″ LCD screen has the standard 1024×600 resolution, like most UMPCs today. The frame surrounding the LCD is a bit thick, which detracts from the display. It’s about an inch thick on all sides, and makes it look almost like a picture frame, especially with the slight bevel sloping down to the screen. The screen itself is bright and sharp, and although it may seem to lack the real estate for large applications, the 10.2″ it offers is adequate.

Upon booting the system for the first time, you have the opportunity to customize Windows XP yourself. I like this option, because it allows you to customize a myriad of things at once that would be painful to edit later, one-by-one. Also, entering Windows XP, you’ll realize that there’s no bloatware. None! I really appreciate that ASUS didn’t go off to include things like “AOL Free Trial” or other things I most definitely would never use.

The software included by ASUS, like their power management utility, is generally intuitive and doesn’t sap your system resources. I think the power management utility is what really lets the battery work for nearly 7 hours on a single full charge. If you unplug the Eee PC while it’s on, you’ll see an onscreen notification that it has gone into “Power-Saving mode.” This setting didn’t affect my productivity, and if you enter the settings for the different power profiles, you can customize the actions the netbook takes when it is plugged in, or unplugged. 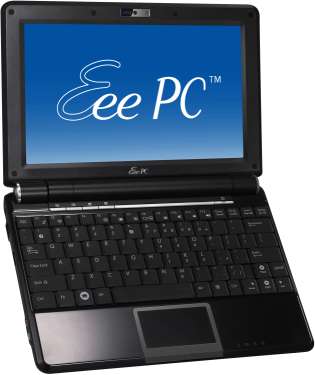 The 1.3 megapixel web cam built into the LCD frame is nothing really special, but it works, and for applications like Skype it worked very well, providing an adequate resolution for my friends to see me in. The built in stereo microphones functioned just as well, with friends reporting a clear, crisp sound. In case anybody doesn’t find the web cam or microphone setup up to snuff, there’s always the option of using your own. The same goes for the speakers, and since the Eee is made for portability, headphones are suggested for any public audio listening.

The web cam doesn’t really recess into the frame, and is covered by a piece of clear plastic so it is flush with the frame. This makes for easy cleaning, as opposed to other integrated web cams that are sunken into the frame, leaving little lines of dust along the edges where even a cotton swap doesn’t do the job.

Towards the top of the keyboard, you’ll find a set of three buttons. These buttons, again, just slightly over-countersunk into the case, control various power functions. The farthest on the left is my favorite; it turns off the screen until you touch the trackpad or press a key. Since the LCD is back-lit by LEDs, the “screen-off” function saves just a bit more battery than having it on. In a situation where every ounce of power is needed, though, it’s a useful function. The next button switches between power profiles, allowing you to simply press a button, instead of having to go into the control panel and select “Power and Batteries” to edit how the Eee manages its energy.

Overall, ASUS’ Eee PC 1000HA impressed me, with its sleek design, portability and power efficiency. Although it has some caveats, it delivers far more than it takes, and in the end, it should make for a perfect choice for most people. I should note that the 1000HA I took a look at lacks both Bluetooth and draft n wireless, but the lack of that effects the price. The 1000HA currently retails for around $425, while the 1000H (which includes Bluetooth and draft N) sits closer to $475. Aside from those two things, the netbooks are identical.