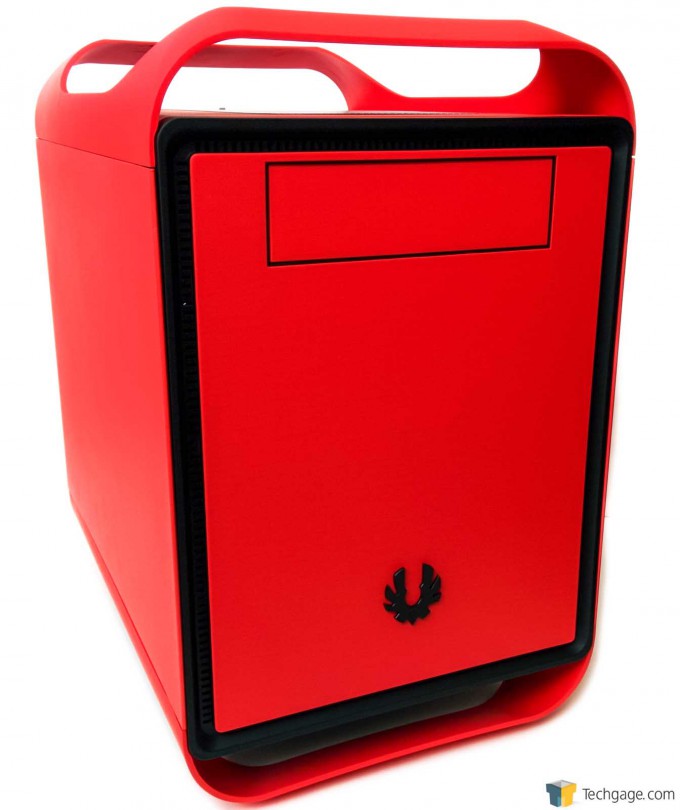 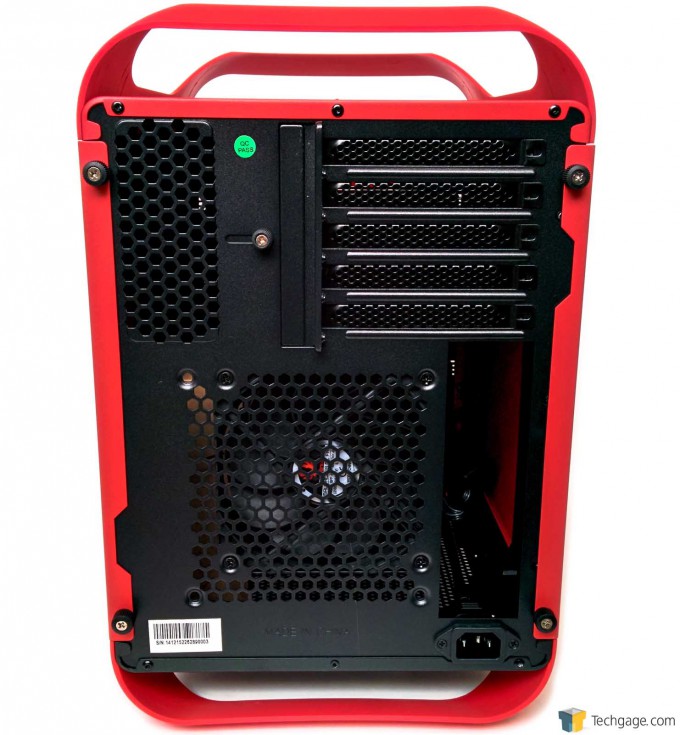 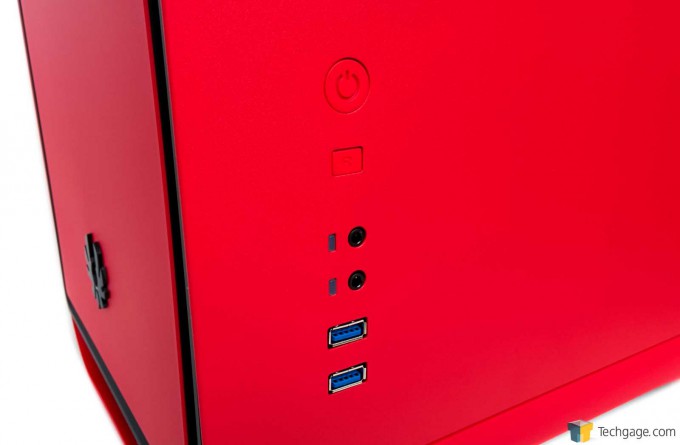 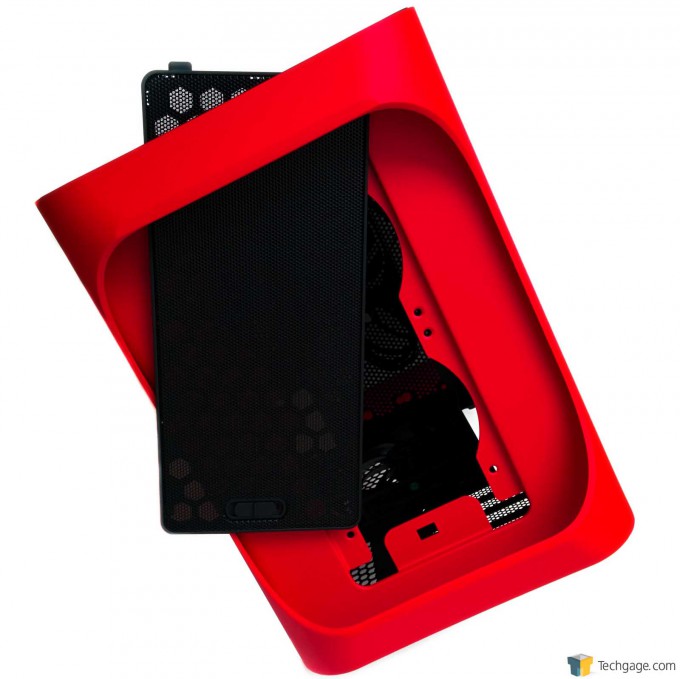 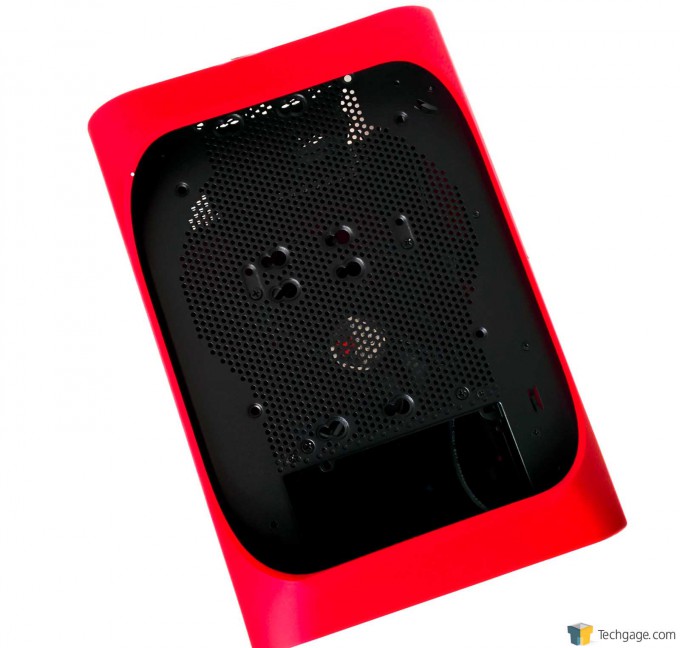 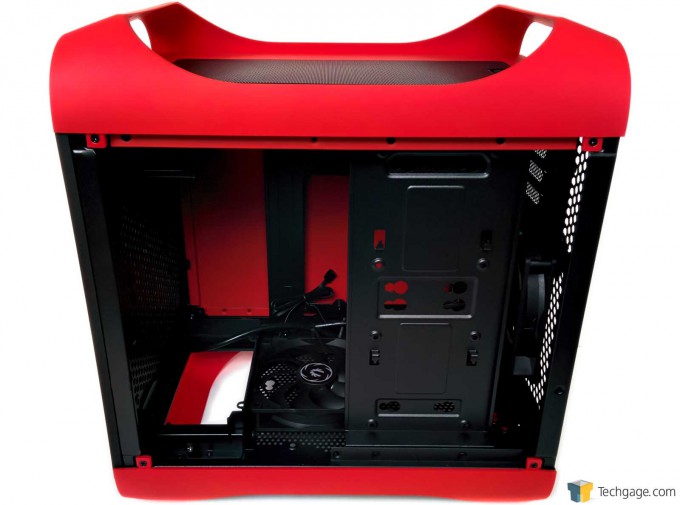 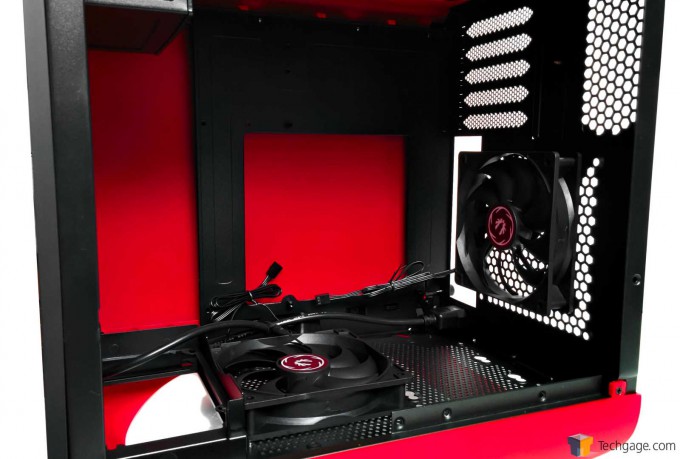 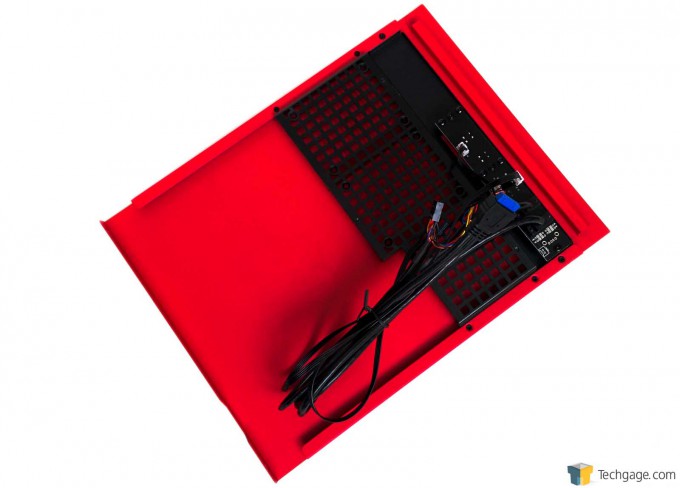 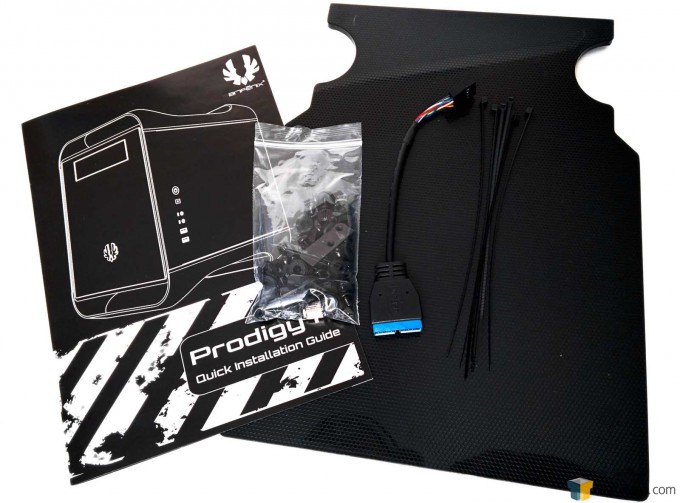 Even though it’s not a component in the final build, we decided to test fit an optical drive to check for clearance issues. What we found was that the drive partially covered the fan on our large test GPU that uses the standard reference cooler. This could severely limit the amount of cool air that can be pulled into the video cardÂ and could cause higher than normal temperatures. 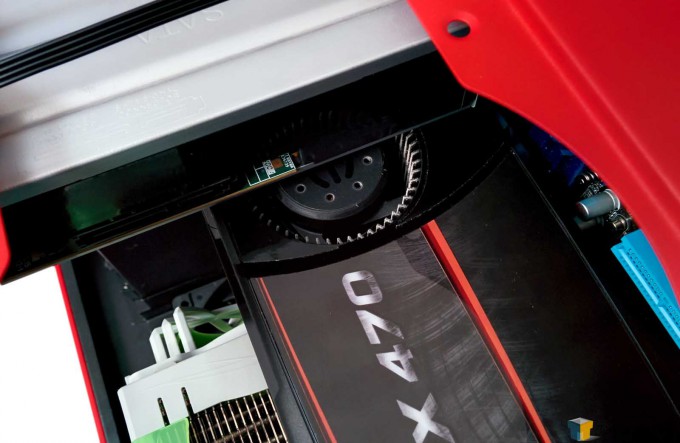 The other hiccup that we ran into had to do with our power supply, and isn’t a flaw in the design of the chassis per se, but rather with the orientation of the pins on the power supply itself. In the shot below we see that the 90 degree cable had to be bent sharply in order to clear the edge of the recessed power supply area. Again, it comes down to the power supply being used, so hopefully it’ll be smooth sailing for most. 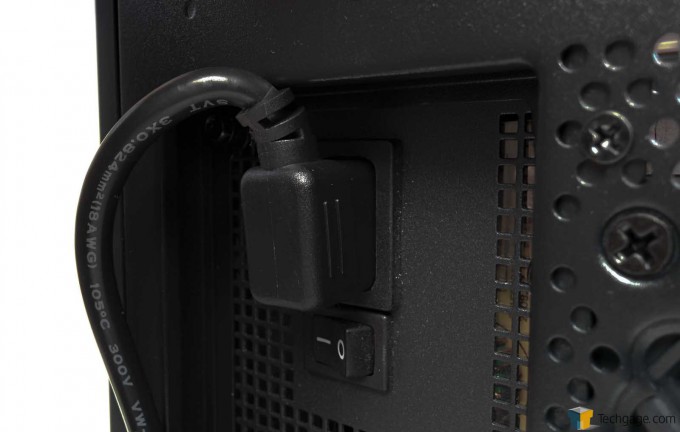 By the time all was said and done, it took about an hour and a half to install our test system into the Prodigy M, which is quite a bit longer than it normally takes using a standard chassis, however this was more or less expected due to the small form factor and interior layout.

The overall build quality remained very high during the installation, however the top handles flexed more than what we were personally comfortable with when it came time to transport the fully built system, and in the end we found it less stressful to carry it from the bottom. Our test system is pretty basic, but we could imagine that packing this chassis full of drives and a liquid cooler could cause some serious problems if the handles aren’t up to the task of supporting the extra weight.

With the build running longer than expected, we decided to forgo tidying up the cables and simply stashed them in the very welcomed space between the power supply, optical drive, and video card. Â Here’s what we ended up with. 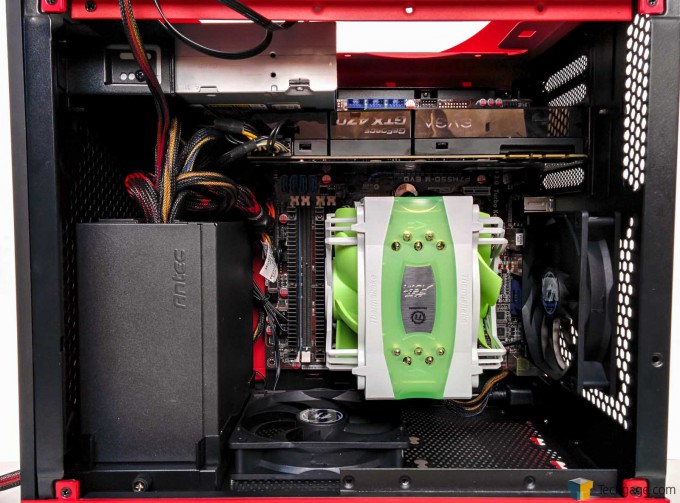 Stock CPU settings were obtained by setting the AI Tweaker option with the BIOS to Auto and the maximum stable overclock frequency of 4.0GHz was obtained after extensive testing to ensure stability. The final clocks for the GPU are 760MHz on the core and 1000MHz QDR (4000MHz relative) for the memory with the voltage increased to 1.087V using MSIâs Afterburner overclocking utility. As with the CPU overclock, testing was done prior to ensure full stability.

Stock idle and load temperatures stayed well under the thermal limits of the CPU and GPU, and were on par with another micro-ATX chassis that we tested out a while back, the Phanteks Enthoo EVOLV. The EVOLV uses a more traditional layout, but at the expense of a larger footprint. With regards to thermal performance, the two systems were neck and neck during overclocked testing.

We also wanted to see just how much affect the optical drive would affect GPU temperatures since it covered almost half of the fan. Thankfully, it only resulted in an increase of an extra degree, but at 96 degrees, that’s still plenty high, and those using an aftermarket cooler with a dual fan design could notice different numbers as well since one fan would be completely covered. Luckily, optical drives seem to be on the way out for most.

Finally, for those who value silence, the system remained extremely quiet, even with the fans running at 100%.

If we had to sum up the BitFenix Prodigy M in one word, it would have to be “advanced”. We don’t want to scare anybody away from such a solid chassis, but we could see how a novice could get frustrated due to what little space there was to work in.

Factor in the potential clearance problems when using an optical drive, as well possibly having to bend the power supply extension cable depending on the orientation of the pins on the power supply, and we could be left with a chassis that’s a bit of a pain for someone isn’t able to roll with the punches as they come.

We’re concerned by the high amount of flex in the handles, and again we would recommend that a fully built system be carried from underneath rather than tempt fate. With the exception of the handles, the build quality of the Prodigy M was fantastic. The panels and frame are very rigid and we didn’t notice any flexing of these during the installation of our test system. 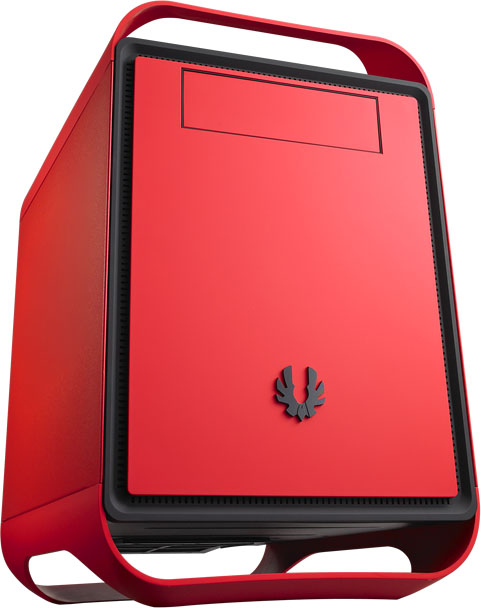 Despite the smaller footprint, thermal performance was on par with a larger competing micro-ATX chassis, and the included fans are some of the quietest that we can recall.

We don’t know many folks who can “make it rain”, so price is also likely to be a factor in whether or not to purchase a Prodigy M. We’re happy to report that one can be had for as little as $85 USD, which is a fantastic deal.

All in all, our time with the BitFenix Prodigy M was a positive experience, however if you’re planning on using one as the backbone of your system, we recommend that extra time is taken to pick the components, or to ensure that your current gear will fit if being used as an upgrade.

Having a little extra patience won’t hurt either.