Today I’m looking at the MP3 Sunglasses by Brando. They’re reminiscent of the blade styled glasses made popular by makers such as Oakley who coincidently offer an MP3 player equipped pair of sunglasses that are identical on the surface. I’m sure that the Brando version is the take-off on the Oakley version but at $75 for the 512Mb pair they do offer considerably better value. The question is what losses do you suffer for that value. 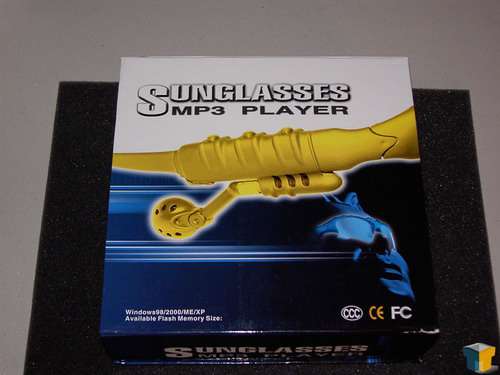 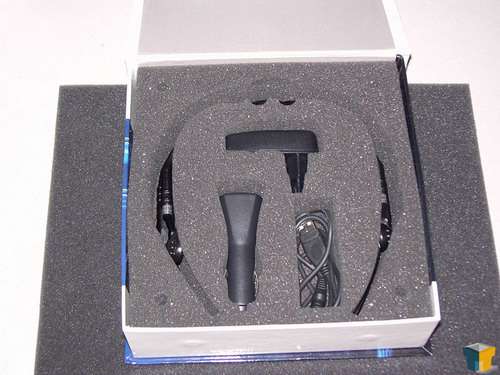 The glasses come in a fairly nice box that features a magnetized flap for opening the box. This allows you to use the box as a convenient storage/transport medium. Another nice thing is the lack of styrofoam in the container, rather they chose to use compartmentalized open cell foam. Included in the package are all the necessary parts, the glasses, USB cable, wall charger and car charger plus instruction sheet. The wall charger is kind of redundant since the glasses derive their charge from the USB port meaning that you can simply hook them to your PC whenever they need charging.

The chargers use the USB cord included with the glasses to charge the battery so if you do take the kit on the road you will need to bring the cable with you otherwise the chargers will be useless. The USB cable is a legacy part, it has the standard USB interface on the PC end but uses a three conductor 2.5mm mini-plug to hook into the glasses so needless to say you have to make certain to not leave the cable anywhere by mistake. If you do you’ll find yourself with a pair of sunglasses that look odd. 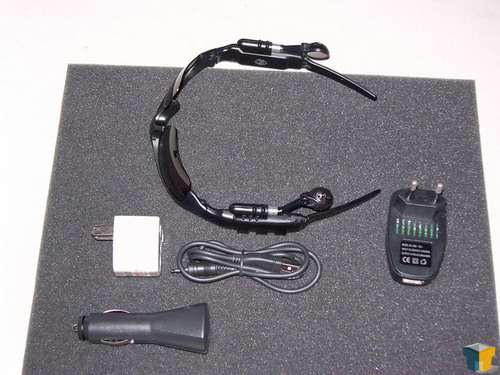 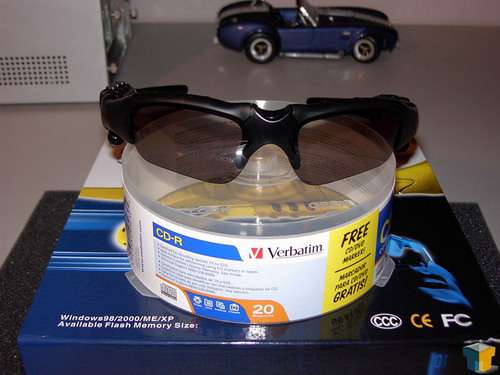 As you can see the wall charger is designed for another country but happily Brando thoughtfully includes an adaptor to allow it to work here. The charger must have some sort of auto-sense for the voltages from the mains since it worked like a charm on 110V AC. The glasses themselves are not the blue tint they appear to be on Brando’s site, instead they’re a medium bronze tint. The frames are made from a hard molded plastic as are the temples.

Unfortunately, if you have a large head (like I do) you’ll find the glasses less than comfortable due to the design. They’re designed to hold to the head via tension placed on the earpieces that create friction on the head. What’s this translate into in english? (you wonder) Well, it means that they’re tight. Incredibly so. After a few minutes of wearing them you (sort of) get used to the pressure but for extended periods of time you stand to end up with one hell of a headache.

Not only are the earpieces stiff, they have zero cushioning. In fact, there are no cushions anywhere on the sunglasses, the earpieces and nosepieces are hard plastic. Needless to say the comfort factor is at less than zero due to the weight and pressure exerted on your head. 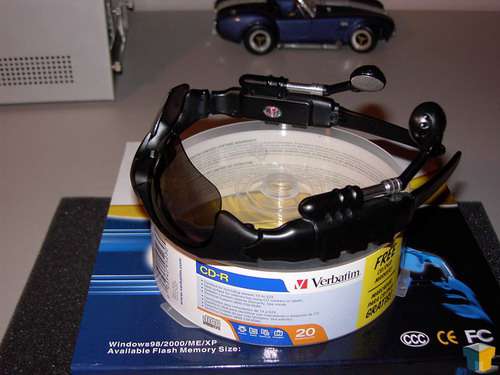 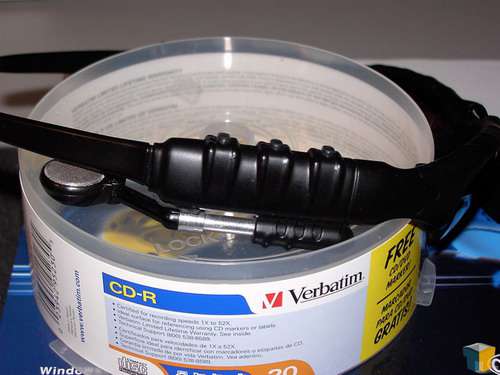 Taking a closer look at the temples we see that the speakers are on telescopic sections that allow them to rotate and the speaker body itself moves fore and aft allowing the speakers to be placed pretty much anywhere that a person’s ear canal would be located. At the top of the right-hand temple are the controls. All three buttons serve multiple purposes. The center button is power on/off and play/pause. The front button is previous track/volume down and the rear button is next track/volume up. According to the documentation when you press and hold the power/play button you power up the unit and that’s supposed to be verified with an audible tone.

Trouble is the only thing I ever heard was a very subtle "click" whenever the power was either turned on or off, there was no tone. Also once the power is on a short press of that button starts play of the last song where it left off…in theory. I found that it would sometimes take as many as five presses of the play button to get music playing. To stop play it never took more than one press but sadly once you stop play the power shuts off and if it doesn’t shut off pressing the play button is rewarded with nothing. You have to shut the unit off then restart it to get play to work once again.

The volume up/down functions are just as maddeningly unpredictable. To raise/lower the volume you hold the associated button down until the volume responds in the manner you choose, again, in theory. In reality it’s largely hit or miss. Sometimes the volume would work and others nothing would happen causing me to release the button and re-depress it. At that point it was a gamble if I was going to get the volume to work or if the unit was going to mistake my command as one to switch tracks since switching tracks is supposed to be a quick press and release of the same buttons doing the volume duties.

Now before you attribute this to U-E (User Error) bear in mind that I was holding the buttons down for the volume in excess of ten seconds before giving up on it changing the volume. Same goes for the power, I was very deliberate in my actions. I know that the buttons were being depressed to the point of contact since they have a very satisfying click that is easily felt when they bottom out. Let’s just say that the user interface leaves a lot to be desired.

Now, on to the speakers, they’re similar in design to the ear-buds that commonly come with CD players and MP3 players except that they’re a good deal larger in size. After placing the glasses on your head and getting the speakers to make solid contact with your ear openings by pivoting the speakers around they sound quite good when you can get the unit to make with the music. Sadly though getting the speakers in place requires at least two minutes of adjusting to get a good seal to your ear canals otherwise the sound is weak and tinny. As it stands once you’ve achieved the optimum fit you still have a slight lack in bass due to a bit of an air gap that can’t be entirely eliminated and allows the rear wave from the speakers to cancel the front wave. It’s not bad but if you press in on the speakers during play you find yourself wishing that they sealed just a slight bit better. 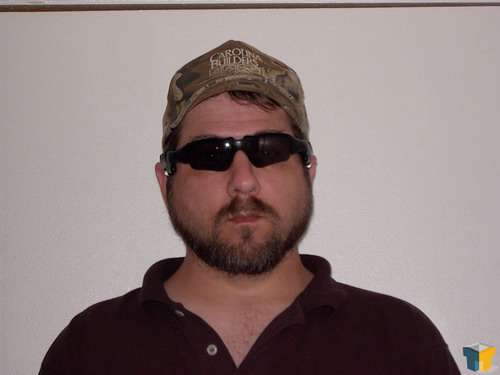 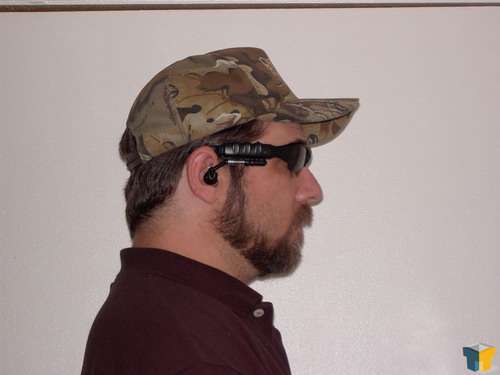 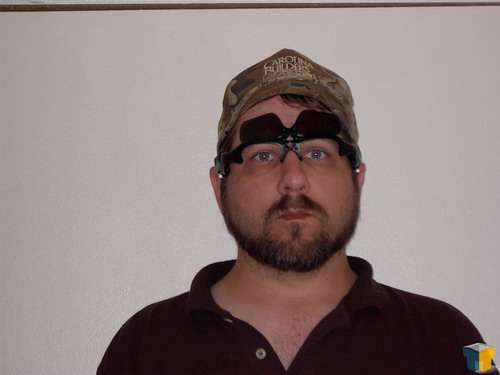 The flip function of the glasses does work fairly well but you need to be careful since the lenses are attached to the center which serves as the hinge. There is no support on the outer ends of the lenses so a bit of clumsy handling could snap a lens straight off and as much resistance as the hinge gives (it’s under spring tension to hold the lenses tightly down and prevent flopping) you could easily do this. The lenses are also a bit on the soft side and are easily scratched so be mindful of what you use as a lens cleaning cloth. T-shirts are definitely out. The lenses are optically neutral meaning there’s no distortion which is a plus. As poorly executed as the controls are I half expected the lenses to be badly made.

The one really positive thing I can say for these units is the Windows interface. Windows sees the MP3 Sunglasses as a flash drive of whatever size you happen to have. They come in 512Mb and 1Gb. Loading media is as simple as copy/paste. As long as the media is a supported format (.mp3/.wma/.wav) the player will cue it up in a format of last added last played. You’re not limited to audio formats though. The Sunglasses can be used as a storage drive just as easily. Simply drag and drop or copy/paste. Brando does include a mini CD with drivers for Windows 9X but I don’t have anything that archaic so I never tried it out. I can only hope that it works better than the buttons do.

Now we come to the part of the review where I boil the fat away and come up with the tallow:

With that said and done it’s time to rate them. With all the problems and functional impairments these glasses have I’m going to give them a 4/10 and Techgages first ever "Hardware To Avoid" rating. Yes, they’re that bad. I’m an easy person to please. A product that does what it is supposed to do and does it well rates a good score and one that constantly fumbles the ball rates a low score. So far I’ve been fairly lucky and I’ve been graced with some truly wonderful products but these aren’t them. I’d like to thank Brando for sending these glasses to review.