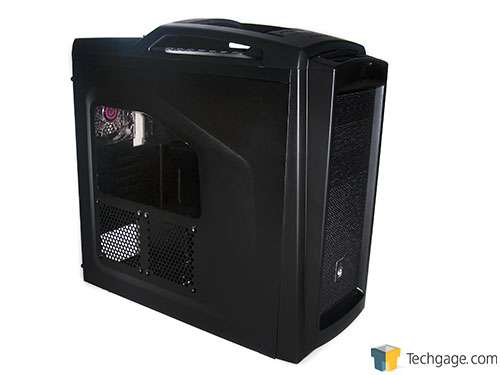 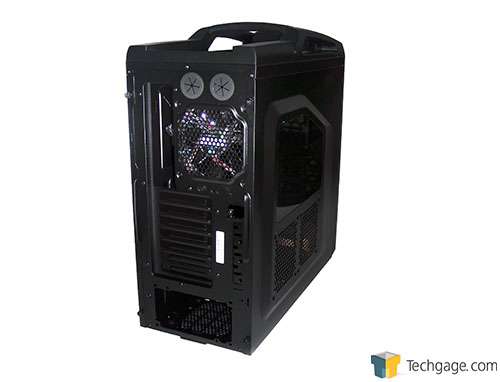 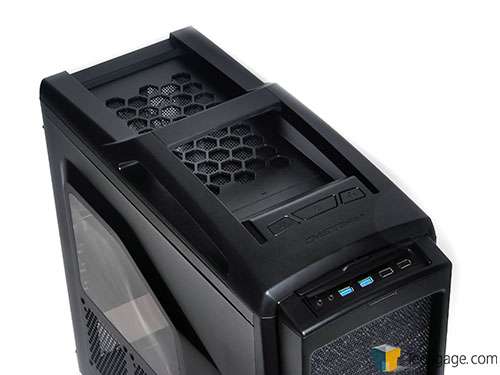 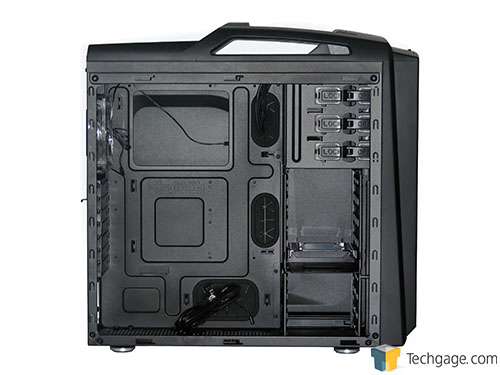 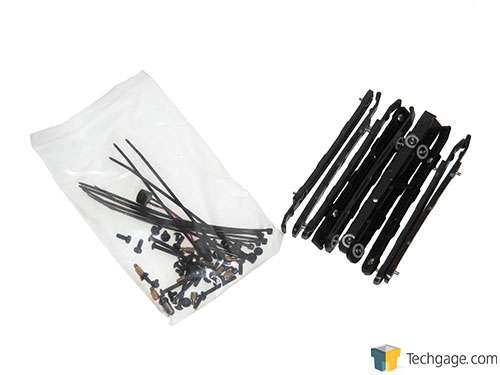 We’ve reviewed quite a few of Cooler Master’s other cases in the past, but this is the first one from the CM Storm line up to now that has hit my bench. Having also reviewed a few CM Storm peripherals and finding them to be excellent products, expectations were naturally high.

Thankfully, I wasn’t disappointed as every component installed perfectly without any clearance or alignment issues, however the long bolts used to secure the fan and radiator of the H60 did not sit flush like the screws for the stock exhaust fan. This kept the right panel from sliding closed completely and in turn threw off the alignment of the holes where the thumbscrews would thread. This isn’t CM’s fault and I found that if you remove the metal washers included with the H60 and use only the bolts, there is enough room to secure the panel. 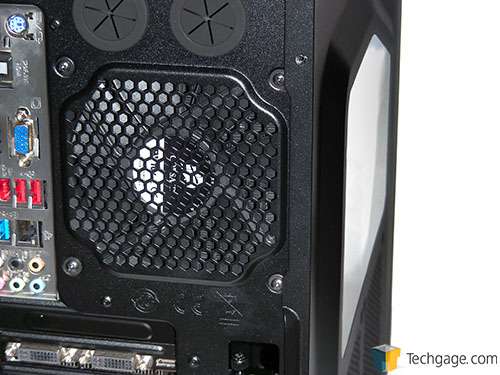 I also wanted to take a closer look at the StormGuard-locking system. Users can loop the cords from their peripherals through the slots and then secure the cover with the thumbscrew. What I don’t particularly like is that the cover can be removed from the outside, meaning your gear isn’t truly safe if someone has enough time. I suppose the thumbscrew could really be tightened down to make it difficult, but having it accessible only from the inside or using a standard screw instead of a thumbscrew would be a better option. 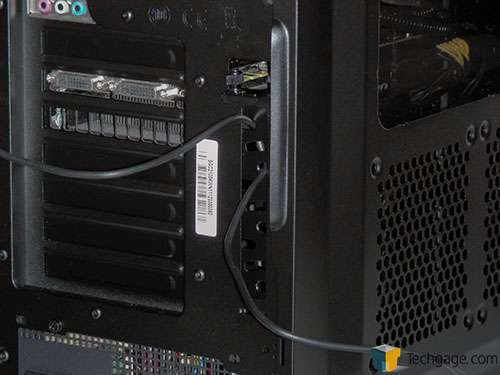 Now, there’s a good amount of room to work in and more than enough for those using larger components. The option to remove the top section of the drive cage is nice since some need extra airflow for hungry systems, are running larger GPUs or have one where the power connections are located on the end. With that said, here’s a quick look at the finished installation. 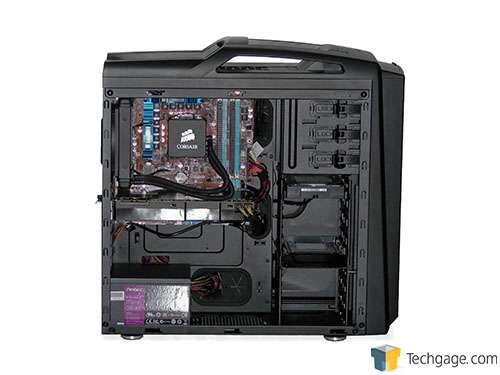 The backside of the motherboard tray is a bus crash like always, however there’s more room back here than any other case that I have looked at in the past. Users can expect almost 3.5cm or just over 1 1/4 inches of clearance from the back of the motherboard tray to the inside edge of the panel, so most should have more than enough room to run their cables. 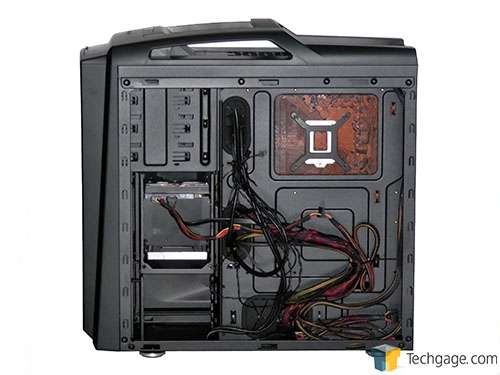 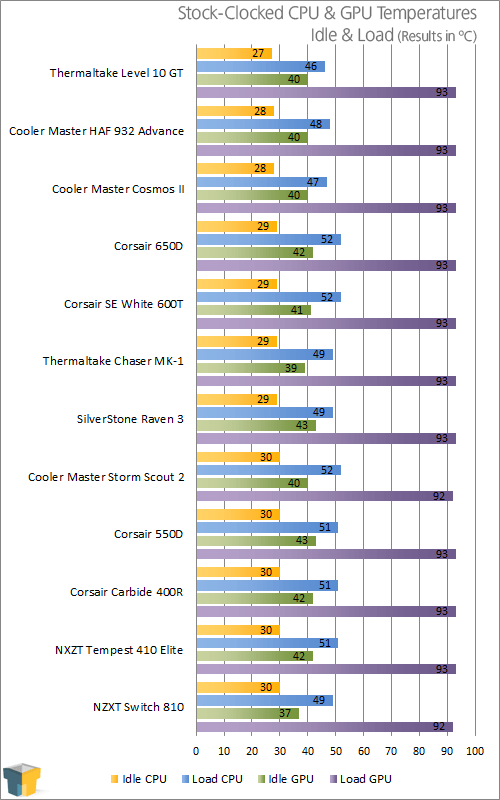 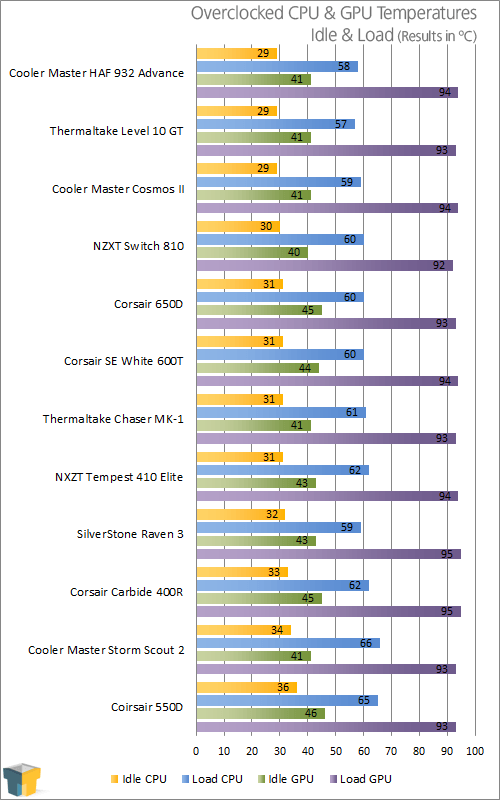 I can’t say that I’m really surprised with the outcome of our temperature testing seeing how the Scout 2 only comes with one fan, which was replaced by the H60.

To be fair to Cooler Master, I had every intention of running the overclocked test again with the H60 secured to the top of the case and then leave the stock fan alone, however there isn’t enough clearance for a top-mounted radiator. Instead, the stock fan was installed in the front, which dropped the fully loaded, overclocked CPU temperature by 3 degrees to 63, putting it in line with the rest of the field thanks to the cool air being pulled in.

Coming in at a penny shy of 100 smackers US, the Scout 2 isn’t cheap, and having to add additional fans to achieve better cooling will drive the price up even further. I would like to see another fan included seeing how even one intake fan made for a nice drop in temperature.

There’s also the issue of the well-intended, but poorly executed StormGuard locking system. This is more of a deterrent than a full-blown anti-theft system, seeing how I could remove the cover from the outside in about 7 seconds, but I knew what I was looking for whereas most thieves probably wouldn’t and may walk on by in favour of an easier target.

Overall, I enjoyed tinkering with the Scout 2. The original Scout was released before I joined the Techgage roster, but I have read the review. Cooler Master has built a very solid follow-up case that should be able to survive multiple trips to LAN parties or wherever you need to go since the build quality is top-notch. In case you’re wondering, that handle won’t break anytime soon either as it’s rock solid.

We all know that looks are subjective, but I like the clean look of the Scout 2 more than the original. The front I/O area is covered and the buttons have been left completely black, making them inconspicuous in order to keep the exterior clean.

All in all, the Scout 2 is a great case that falls short in the cooling department. If Cooler Master decided to throw in another fan like it did with the original Scout, I would have had no problem awarding it an Editor’s Choice award, however, a case in the ~$100 price range should be able to keep such a light system cool.