Dell is a huge company, but there were only a few new products that they announced at this years CES. Thanks to those few though, we walked away impressed. Included is the new H2C XPS desktop, 27" monitor, M1710 XPS laptop and even the 966 all-in-one printer.

The first stop we made at the Intel suite was of course, the XPS H2C. Before I even realized why it was so cool, I was impressed by the way the machine just screamed out that it had power. XPS machines are well known for being beast machines, but the H2C is designed for great overclocking ability as well.

I assume that the C in "H2C" stands for "cooling" because that’s exactly what this new contraption is set out to deliver. The cooler is a two-stage hybrid solution. It’s of course powered by liquid, but also contains control circuitry. I was unable to get a picture of the inside of the cooling unit itself, but we were given a few tidbits of information. First, it course includes a 120mm fan to help dissipate heat quicker.

The tubing is not translucent, but rather pure black although I forget the material. In the end though, this is a smart choice for Dell and the consumer since they won’t have to worry about condensation. 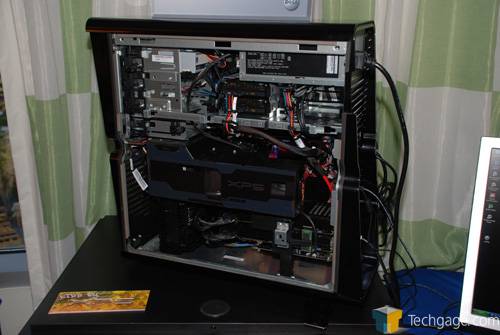 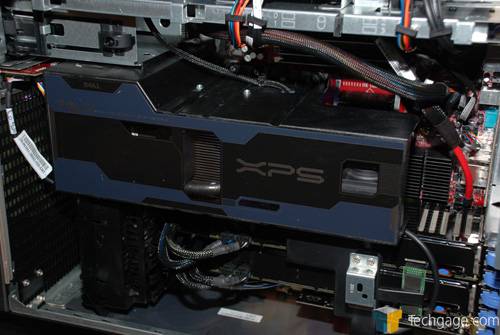 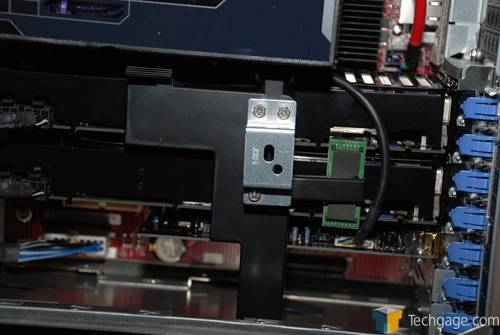 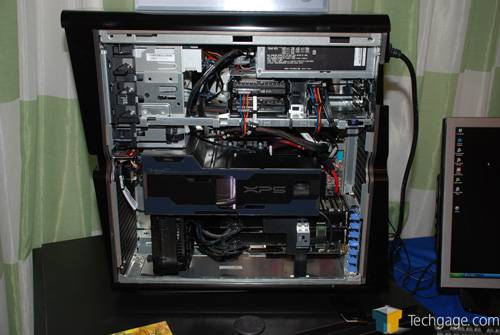 You can also easily throw in AGEIA’s PhysX card if you want some action on that front. The monitor should also be upgraded, as a single 8800GTX could eat for breakfast whatever a 20" monitor could throw at it, much less two in SLI. This beast is meant for at least a 24" monitor but would be better suited when paired with the 30". 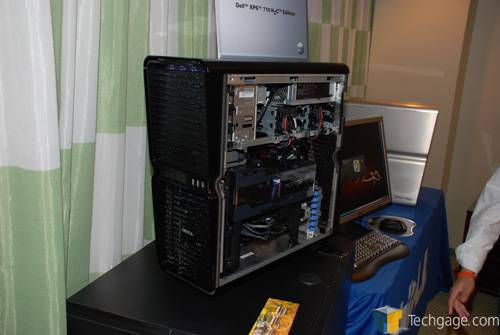 That all aside, this is one system that both Greg and I were impressed by. Our friends at CoolIT had a part in the cooler design process, so you can really except good performance and quality on that front. Taking a look at this system and knowing that fact that Dell actually -allows- overclocking really shows that they "get it".

After drooling over the desktop, we took a look at the M1710 XPS laptop which caught my eye quick. I am not a fan of small screens, even on laptops, but this was by far the sharpest screen I’ve ever seen. This notebook includes a Blu-Ray drive so they were playing Ice Age which just so happens to be available on that format. We skipped to various parts of the movie, especially scenes that included water and we were extremely impressed. 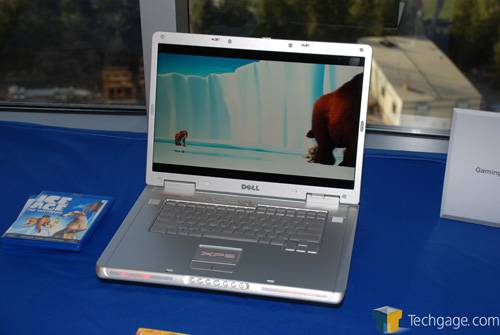 While I am not one of those who will jump on either the Blu-Ray or HD-DVD bandwagon, it’s a nice feature to have -just- in case you want to burn those discs in the future. Considering that they can hold up to 50GB of information, it’s not a foolish option to include. 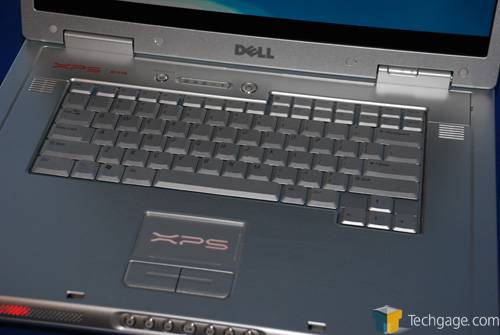 While the CPU and GPU are amazing, the hard drive is small and there is only 1GB of ram. Of course, this can all be upgraded, but prepare to open that wallet ever further.

It wasn’t too much of a surprise when Dell showed us their new 27" UltraSharp monitor, which settles itself right in between the now inexpensive 24" and 30". The new monitor shares more in common with the 24" however, seeing that the native resolution is still 1920×1200 at 6ms. 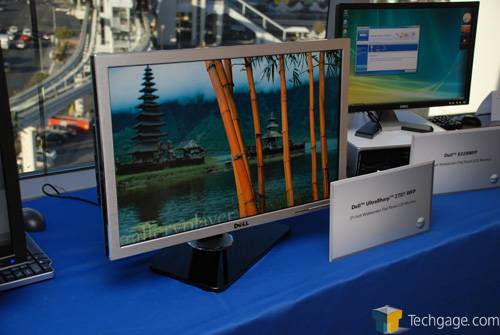 Besides the fact that it’s 27", there was one thing specifically that Dell got excited over showing us. “Go ahead, look at the back!” They touted that this is one monitor that looks just -as- good from the back as it does the front. The entire monitor is styled differently than what we are used to, with a brushed aluminum look. But yes, the monitor itself really does look good from the back, as you can see from the photos. 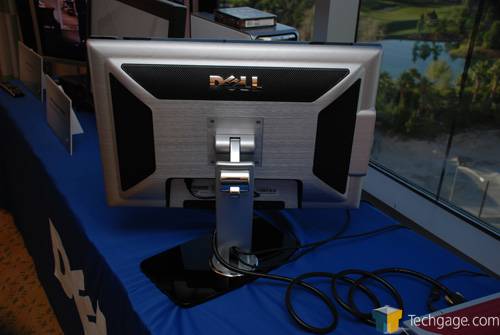 The reason behind this, is for those who work in offices and have people walk by their desk all the time. Wouldn’t it be nice if instead of looking at an ugly back, people instead see a stylish work of art? That’s Dells take on things and it makes sense to me. The price tag on this 27" will hover around $1,399, almost as expensive as it’s bigger brother but includes the improved look and HDCP support through the DVI port.

Thanks to the overwhelming reaction to the 27" monitor, their newest “smaller” monitor seems to be getting overlooked. The 22" is for those who still don’t want a huge screen, like the 24", but want something bigger than what they have now. The screen quality was on par with the 24" and borrows the native resolution of a 20" screen which is 1680×1050 at 5ms. 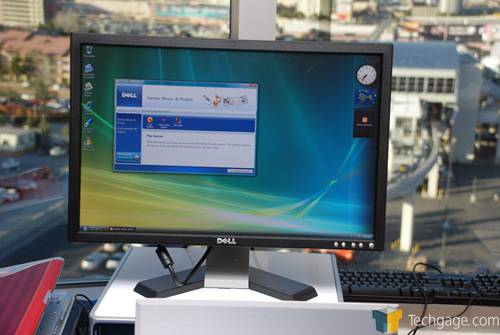 What may very well be the most attractive selling point for the screen is that it retails for $299, a price tag much easier to swallow when compared to the 27", 30" and even the 24" in some circumstances.

Although it was tucked in a corner, Dell also mentioned to us about their newest all-in-one printer, the 966. It has the ability to print, scan, fax and copy. It boasts an impressive 32ppm for black and 23ppm, but it wasn’t proven to us there. Besides the usual, the 966 also includes a bright 2.4" LCD screen that displays various options as well as the photos from your memory card or digital camera. Oh, did I mention that the 966 is wireless? Doesn’t seem like a bad setup for $249.99, but I’d like to get one in and give it a run before making any conclusions. 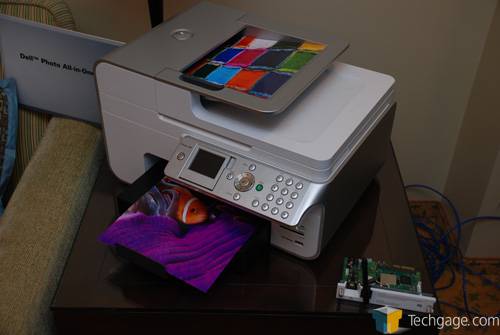 Dell did not have a huge array of new products to unveil at CES, but what we did see left us impressed. One thing I was most pleased with was the fact that the 27" -finally- had a new look. Dells monitors (as most others) never did anything to impress by way of styling, so it was good to see an update. Hopefully current and future models will be updated to reflect this also. Thanks to Dell for their time and for answering all of our questions.