Yesterday may only have been Day 1 of Intel’s Fall 2008 IDF conference, but it was certainly the busiest for us at Techgage. Among the day’s furiously-paced activities, we’ve been audience to several keynote speeches – many of them condensed into an afternoon marathon that featured Pat Gelsinger and Dadi Perlmutter.

After an almost frighteningly quick cab ride through the eleven blocks between our hotel and San Francisco’s Moscone Center West on Tuesday morning, and a quick stop for caffeination, we arrived during the very earliest part of Intel Board Chairman Mike Barrett’s keynote.

Barrett’s speech focused on the various ways that technology has improved the quality of life worldwide, and focused on four major revolutionary technological developments in the areas of human-machine interface, venture capitalism, healthcare, and alternative energy 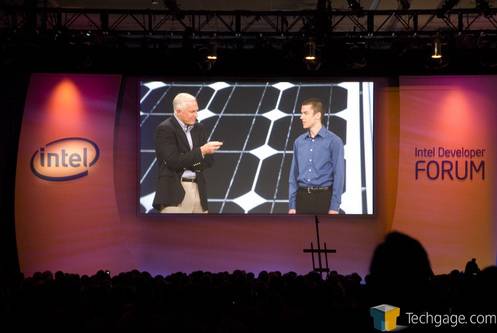 During the speech, Barrett was joined onstage by the people responsible for the technological developments he discussed, and he engaged them each in a short interview. Present was Johnny Lee, the famed developer of ‘head-tracking’ using a Nintendo Wii system, who demonstrated an electronic whiteboard system. Next came Matt Flannery, the CEO of Kiva, a web site that connects entrepreneurs that have smaller financial needs with small-time investors willing to address those needs. After that came a student from Oregon, who had won awards for his work with polymer-based solar panels. 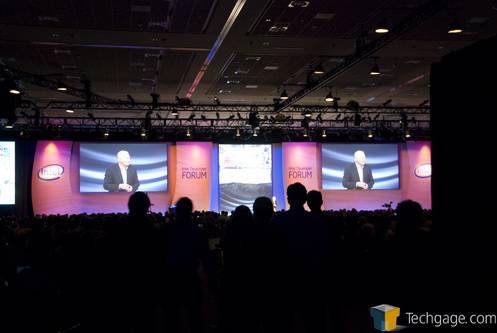 All of this led up to Barrett’s announcement of the Intel “Inspire-Empower” award program, which will award four $100,000 prizes to entrepreneurs who are developing truly revolutionary ideas to advance technology, with the entries being judged by an independent panel, and the prizes themselves to be awarded at the Spring 2009 IDF.

That afternoon, we filed back into the auditorium to hear a speech by Intel’s senior vice president of the Digital Enteprise Group, Pat Gelsinger. Pat’s speech touched on three placed that Intel product architecture is headed – embedded, dynamic, and visual. 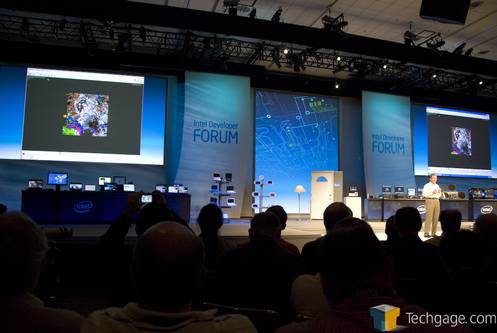 To the end of embedded internet-access products, Intel offers its commoditized low-power CPU, the Atom, which already appears in several consumer products, such as the Eee PC by ASUS. He identified several potential barriers to development of a successful embedded-media CPU, or any type of silicon for that matter – long product life, scalability, cost, power consumption, power management, He then proceeded to explain how Intel technologies provide solutions to those barriers, including WiMAX and IPv6 addressing.

Pat revealed Intel’s involvement with the IPv6 By 2012 movement, and then explained how Intel’s Atom addreses the needs of embedded internet access applications, along with Intel’s upcoming San Onofre system-on-a-chip processor that’s expected in the second half of 2009. To wrap up his discussion of the ‘Embedded’ internet access segment, Pat welcomed a BMW engineer onto the stage to demonstrate a media/navigation system built into a car, and powered by an Intel Atom CPU.

Next, Gelsinger discussed the dynamic scalability of the Penryn and Nehalem microarchitecture, which would next appear in the form of the “Dunnington” 6-core Xeon-class CPU. He also introduced benchmarking scores for the six-core Dunnington CPU, which included a SPECint_rate 2008 score of 277, and an IBM benchmark during which the Dunnington CPU broke the 1 million score barrier. After that, he explained a few more details of how the Nehalem product offerings would break down – on the server side, Nehalem-EP products would provide enhanced power management, wile Nehalem-EX products would deliver increased performance.

Gelsinger next invited Rajesh Kumar up onto the stage, to explain the advanced power management features of Nehalem that virtually eliminate power waste via leakage, and Nehalem’s innovative Power Control Unit, which would provide the CPU with monitoring to ensure that it’s operating as efficiently as possible. With Nehalem, which you’ll soon come to know as the “Core i7” architecture, Intel has managed to produce a CPU that uses a vanishingly-small amount of power with all transistors in the ‘off’ state, but the PCU also has the ability to deactivate certain cores of the multi-core CPU that are not being loaded by software. 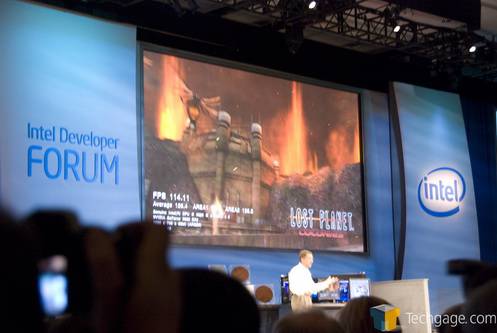 After this, Gelsinger described how Nehalem will provide an enhanced platform in servers, on the desktop, and in mobile computing, with workloads such as high-performance computing, 3D content creation (typically rendering), and virtualization. Nehalem supports what Intel is calling ‘Virtualization 2.0’ – which now features workload management, as well as an improved I/O layer that prevents the CPU from being bogged down with overhead from network traffic.

On the desktop, Intel’s latest X58-based “Ibex Peak” motherboard uses a single-chip solution for the motherboard chipset, since the memory controller is CPU-integrated for the first time with Nehalem. He also demonstrated Nehalem machines in a gaming situation, as well as a machine with Cinebench installed – which delivered twice the performance of a similarly-equipped Skulltrail motherboard with Intel QX9775 CPUs.

Gelsinger concluded his keynote with some remarks on Larrabee, including some technology demos. One demonstration featuring transparency demonstrated the way that the Larrabee GPU could provide the necessary texture sorting to ensure that transparencies could be properly conserved. Another demonstration highlighted the Larrabee processor’s programmability, through an ‘irregular Z-buffer’ application for smoothing the edges of reflections. Implementation of such a Z-buffer would require an additional stage in the graphics pipeline, and a complete redesign of a traditional GPU, but with Larrabee, all that needs to be added is another programmable step.

Pat Gelsinger’s keynote touched on a wide variety of exciting new technologies (Nehalem, Larrabee) and injected new excitement into some that we’ve already seen (in the case of Atom). We can’t wait to see how the face and nature of computing will change as a result of these new technologies, as the internet goes integrated with Atom, scalable processor architectures take over with Nehalem, and graphics processors go programmable with Larrabee, All three of these new technologies are built on Intel x86 processor technology, and are part of the company’s push to expand x86’s reach.

Dadi Perlmutter: “Where Will ‘On-the-Go’ Go Next?”

The Pat Gelsinger keynote segued directly into the next keynote, by Intel’s Executive Vice President and General Manager of Intel’s Mobility Group, Dadi Perlmutter. Perlmutter’s speech was entitled “Where Will ‘On-the-Go’ Go Next?” At the start of the keynote, Dadi made a staggering prediction: 1 billion mobile internet access devices will ship next year. This includes notebook PCs, netbooks, UMPCs, and internet-connected cell phones. Dadi reinforced this prediction by highlighting the transition from desktop PCs to notebook PCs, in terms of yearly sales. Laptop sales are expected to steal the desktop PC’s slim lead in 2009, and only continue to grow from there, as desktop PC sales grow at a much slower rate. 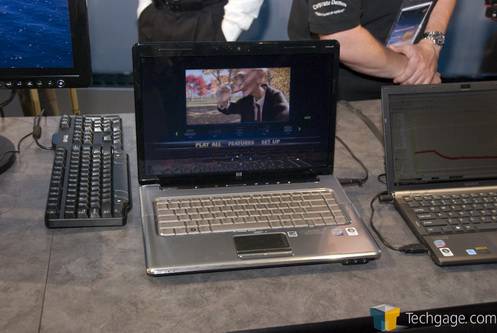 To address this growth, Dadi described Intel’s threefold product approach. First, Intel is about to begin shipments of low-power quad-core CPUs specifically for use in notebooks, and Nehalem’s power-thrifty design is only expected to widen the quad-core performance envelope further as it makes its transition to mobile CPUs. The problem with shoehorning a quad-core CPU into a notebook PC is that power requirements increase, and thermal requirements increase accordingly.

In a domino-effect, those power and thermal requirements require larger battery packs, and additional size, weight, and noise for thermal management. However, the future of mobile quad-core CPUs from Intel will bring with it a transition to smaller and lighter devices with multi-core computing power. 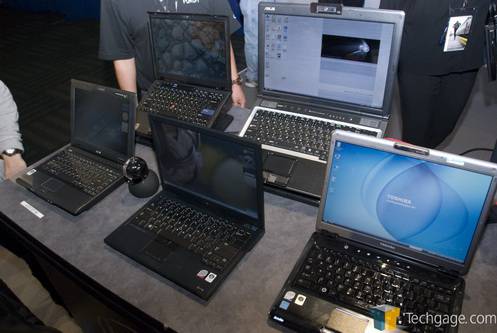 The next prong in Intel’s approach to mobile computing, as Dadi explained, is the Centrino 2 (Montevina) platform, which reduces power requirements from other parts of the mobile machine, and further helps to preserve the thin, light form factor and design that customers demand in their mobile PCs. The primary way it accomplishes this is by dynamically controlling the CPU’s speed and voltage through Intel SpeedStep technology.

Dadi demonstrated a Centrino 2-based machine with a SSE4-capable Intel Core 2 Duo CPU side-by-side with a machine based on the original Centrino platform, with a Core Duo CPU. The SSE4-enabled Core 2 CPU absolutely smoked the earlier Core CPU in a Sony Vegas encoding run, finishing in only a fraction of the time. By the time Dadi moved on from that demonstration, the earlier Core-based notebook was still churning away on the encoding task.

Dadi also demonstrated a Sony VAIO notebook PC (which we reported on in our ‘news’ section some time ago when it first arrived), which allows the user to switch between a third-party discrete graphics processor and the Intel chipset’s integrated graphics core. This enables a major benefit of hybrid-graphics operation that was previously only available in chipsets from NVIDIA or ATI. Another demonstration showed that a laptop machine with Centrino 2 power-saving technology is capable of playing a typical 1080p Blu-Ray movie on a single battery charge. 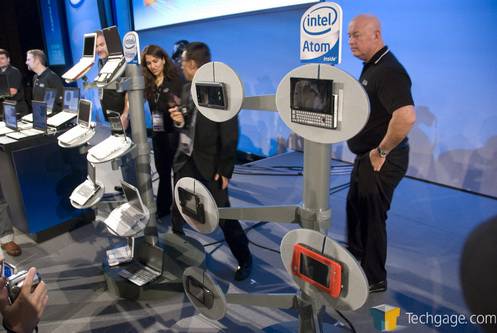 The third prong of Intel’s approach to mobile computing is the Atom processor, which endows MIDs, subnotebooks, ‘netbooks’, and UMPCs with performance that was only seen earlier in processor industry black sheep VIA’s line of ultra low power CPUs. However, Dadi left coverage of the MID and UMPC product range to Anand Chandrasekher’s Wednesday morning keynote.

This year’s Intel Developer Forum conference is shaping up to be one of the most exciting IDFs ever. Not only are we witnessing evolutionary improvements in CPU technology, but Intel is using the event to showcase the multitude of new directions that the company is taking as it works to lead technology development in the lucrative new markets that are opening up in the rapidly-changing PC and consumer electronics industry. We’ll have more coverage of this year’s IDF forthcoming, but Tuesday proved to be the most exciting and information-rich day of the conference.