InWin might be known mostly for its premium and often extravagant cases seen at trade shows, but this time we have a more budget focused build. Capable of holding up to E-ATX motherboards in a relatively small form factor, the InWin 216 might be for those that want some class but on a budget.

Do you really need to spend a lot of money on a nice case? If youâre looking for high-end features, does that require a high-end price tag? InWin isnât typically associated with budget cases, but today weâre going to take a look at one of its latest budget-minded offerings: 216 E-ATX mid-tower.

Computer cases have changed so much over the years, especially in the last 5-7 years, all the while keeping the same compatibility with ATX standards. I remember back in the mid-90s, I added a hard drive to my Compaq Presario 850 tower, and at the time Compaq was using some proprietary mounting rails that you had to purchase separately if you wanted to add more drives. My solution, being a broke 15 year old, was to cut a styrofoam cup down to size and have the hard drive just rest on that… oh, the good ole days, eh? 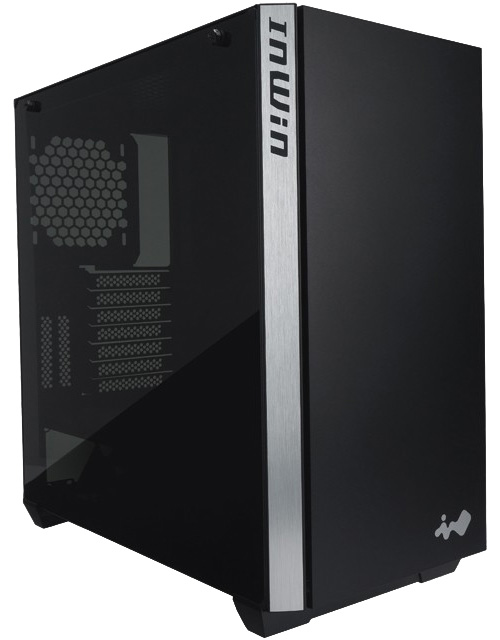 There are so many cases out there today, anyone in the market is beyond spoiled for choice. In fact, it can be really daunting trying to sort through the ever-growing ocean of possibilities out there. Today we will be looking at the InWin 216, a gaming-targeted budget case coming in at the time of this writing, $80 USD.

InWin has been around since 1996, which puts it well beyond the tenure of most of itâs peers. InWin is mostly known for power supplies, servers, accessories, cooling solutions, and of course computer cases. InWin usually has some wild concept cases loaded with interesting engineering every CES.

Gamer-focused chassis used to be… letâs just call them horrible looking. A glance back in the archives of what weâve looked at here at Techgage years back makes me shudder at the design choices that were made back then. As Iâve gotten older (40 this year, yeesh) I certainly appreciate the trend that has been âless is moreâ from an aesthetic standpoint, and that is what the InWin 216 delivers well, as you can see from these photos. 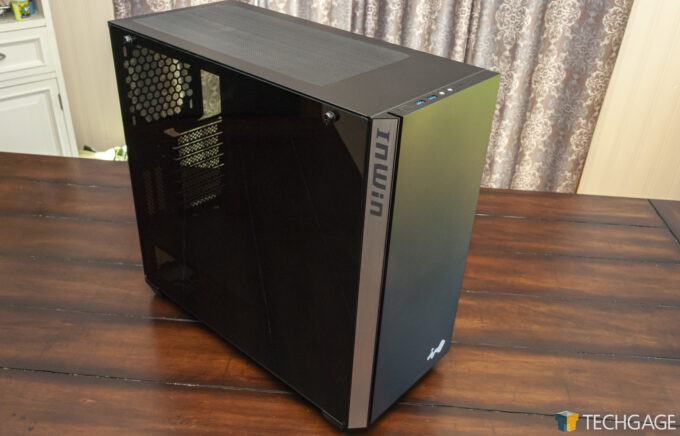 The front of the InWin 216 is all plastic, faced in a matte finish with a small InWin logo in the lower right hand corner. On the left, a brushed metal plate covers a 45 degree bevel with the InWin name in black letters at the top. 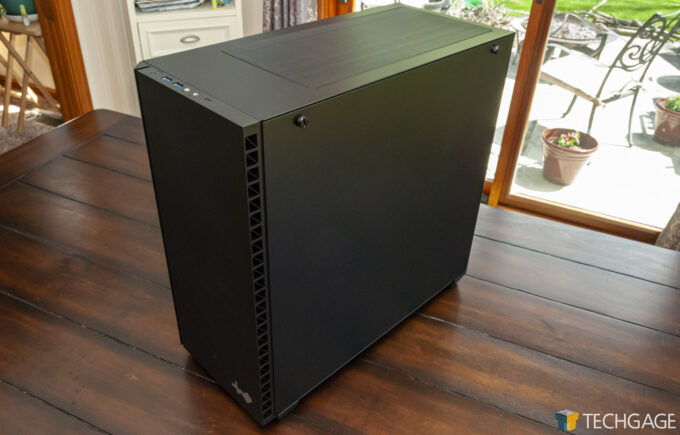 On the right side, we see the air louvers which are responsible for most of the air intake for the 216. 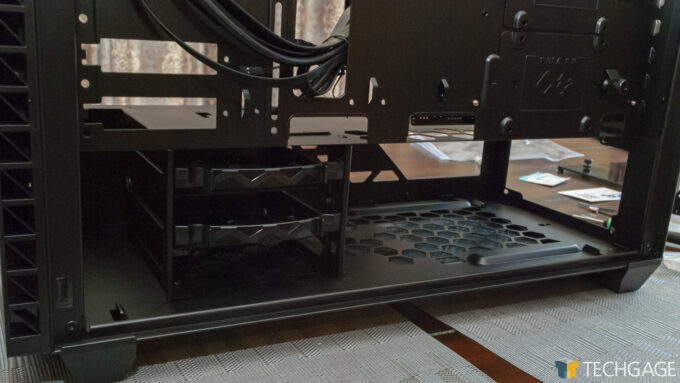 Still on the right side, once we remove the panel, we see dedicated SSD and HDD slots, as well as large cutouts to pass cables through, and punchouts to assist with cable management. 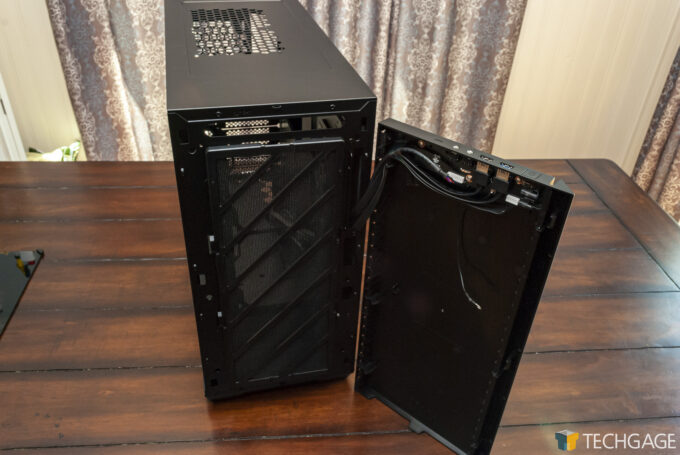 The front panel is somewhat easy to remove, where we find room for 3x 120mm fans, and a dust filter as well. Also on this front panel, we find a modest IO arrangement, two USB 3.0 ports, mic, and headphone jack, a power button, and notably, no reset button. 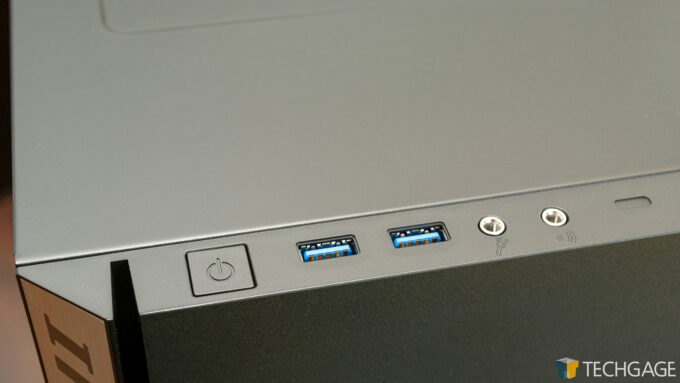 On the left, we find the tempered glass, tinted panel. This is held on with a magnetic closure system, and secured with two thumbscrews. On the corners of the glass panel are protective rubber pieces, a must-have for tempered glass. 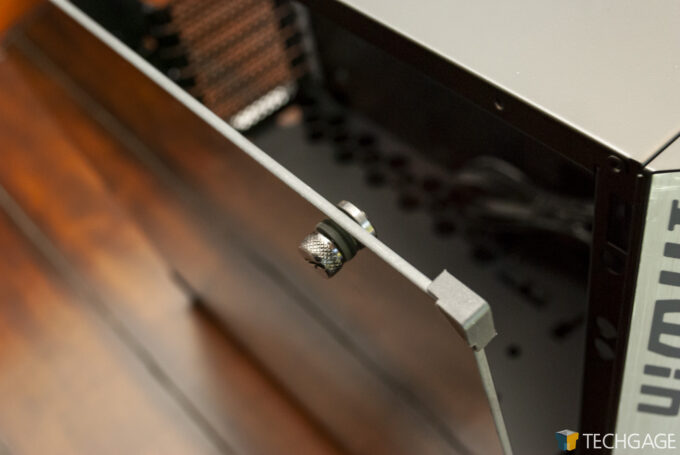 On the top, we find a place for two 120mm fans, and a magnetic dust cover.

On the bottom of the case, we find another removable dust filter covering a large opening for the power supply fan, and other holes in the bottom to let air pass through. 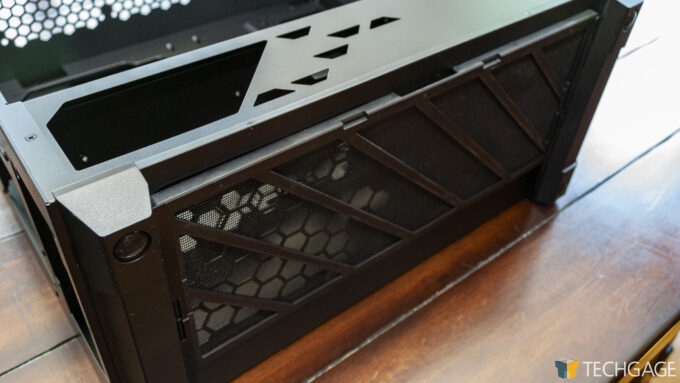 On the back of the case, we find the home for the IO panel, 7 PCI slots, and two more to the right of that if you choose to mount your GPU vertically. This requires a cable which is unfortunately sold separately. And lastly at the bottom, there’s a cutout for the power supply. 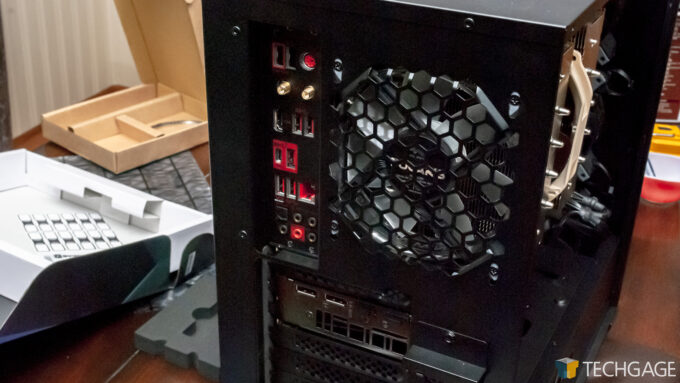 Once inside, we find that everything is finished in a matte black, very nondescript, allowing your motherboard and other components to be the real stars of the show. 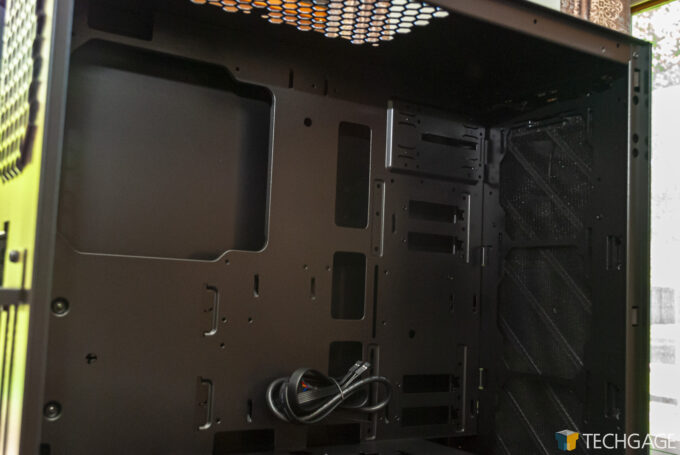 InWin does not ship the 216 with any included fans, which can be seen as positive or negative, depending what market you’re in. Since many buyers of custom systems tend to prefer to use their own fans rather than the often cheap fans provided in budget cases, removing them from the case lowers the cost. Since no fans come with the case, InWin was nice enough to include three pairs of its Polaris Silent RGB Case Fans for this build review. 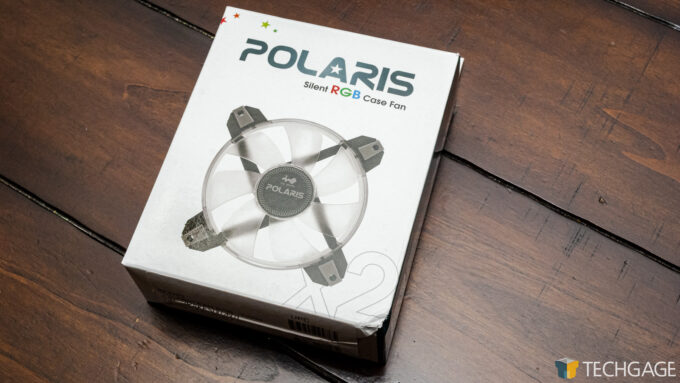 Iâve built many computers in my day, and everything with this build went very much as expected, it even booted up on the first try! Inside the case, I found a lot of room to work, and absolutely no sharp edges anywhere to cut myself on, or snag any wires. The fit and finish of this case is exactly what you would expect from a company with as much time in the game as InWin. The case came with all the hardware you would need for a basic build like I have here. 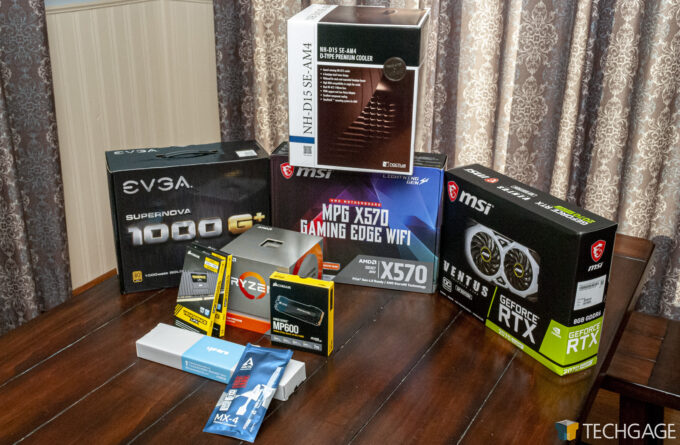 As far as the case design goes, I want to remind everyone that this case retails for less than $80 USD, so we have to keep that mind. The front isnât as easily removable as I would like, which makes removing the dust filter for cleaning more of a job than it should be, but itâs not that bad to do. On the bottom dust filter, we find a similar design, which isnât as easy to remove as other cases Iâve owned before. Again, $80, so I canât complain too much. 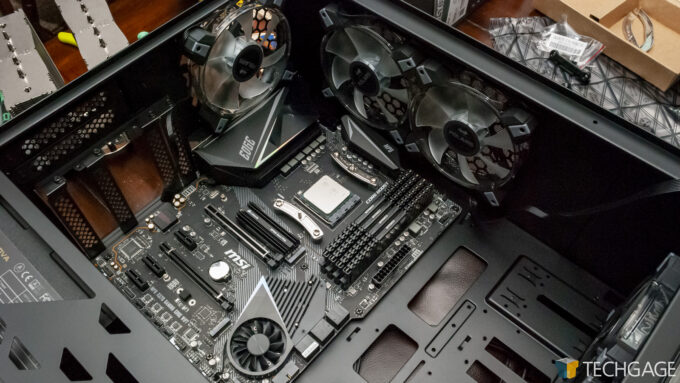 As far as air flow goes, the InWin 216 design leaves something to be desired. Airflow comes almost entirely from the front, where you can have up to 3x 120mm fans installed, but youâre restricting a lot of surface area of those fans, because of the small louver section on the right hand side. If you are planning some massive water-cooled, overclocked monstrosity, you probably arenât going to be looking at a case like this anyway, but if you are, Iâd look elsewhere as the restriction to the airflow is likely going to hinder cooling if youâre going to have a lot of heat that needs to be removed via airflow. This case supports up to 6x 120mm fans, which is great, but if they donât have much space to breathe, whatâs the point?

If youâre going to be building something modest, however, and not worry about overclocking, or liquid cooling, this case will likely move enough air for what youâre needing to get done. You can see my build specs above, and even with heavy gaming, 1440p, temps were never a concern, not for the CPU, motherboard, or GPU, everything stayed nice and cool. 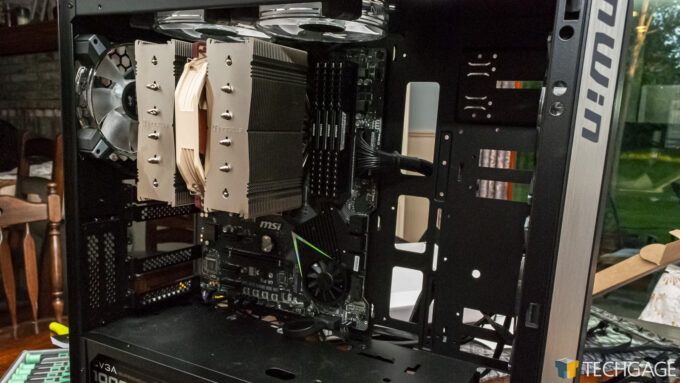 One thing to keep in mind with any CPU cooler in any case, is make sure you have enough room for everything. With my Noctua CPU cooler, it fits with one fan, but the other fan doesnât fit because of the RAM, and this isnât tall RAM at all. Having the extra 140mm fans on the Noctua would prevent the side-panel from closing. This isnât a big deal though with this configuration; if I were overclocking or something I might have chosen a different case so that I could fit both fans on, but this configuration seems to move plenty of air across the CPU cooler as-is.

Something else worth mentioning, if you plan on using the vertical mount on this case, make sure you have a thin GPU, as there just isnât much room between the vertical slot and the front glass, so any GPU that isnât thin will have a hard time breathing.

Now that weâve gotten the downsides of the case out of the way, letâs talk about the upside, which is very premium features in an impressively affordable price range. Some of those premium features worth highlighting that you couldnât find on a low-cost case 5 years ago, or maybe even be hard pressed to find now on even a $100 case, is the tinted tempered glass panel, the magnetic closure mechanisms for the front and rear panel, the dust filters, and the premium fit and finish. 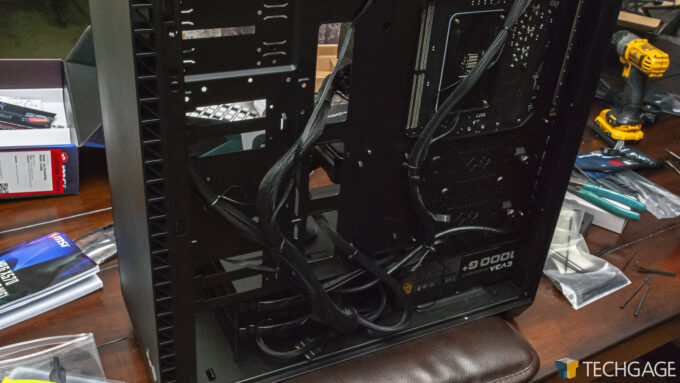 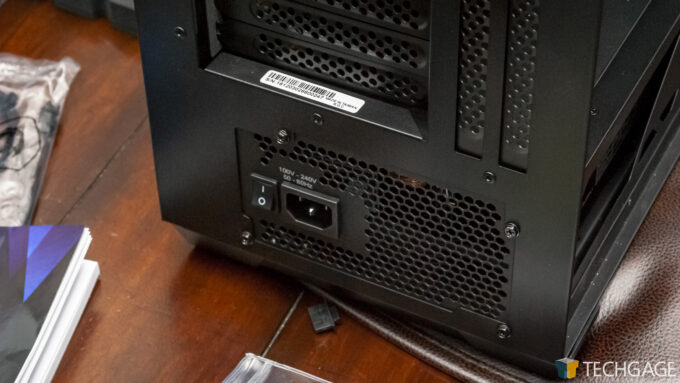 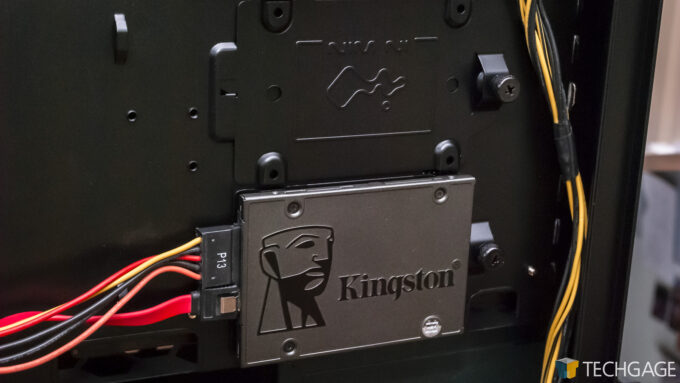 The fans that InWin sent with the case (sold separately) are really nice. You can daisy-chain them together with included jumpers of varying lengths, and they are as advertised: silent and RGB.

The bottom line is, if youâre looking for a top performing case that moves enough air to inflate a sports arenaâs dome in less than 1 hour, to keep your overclocked water-cooled 4x TITAN GPU system cool, then this case isnât for you. If you are however, looking to create a modest build and donât want to spend much on a case, then the InWin 216 is definitely worth taking a close look at.