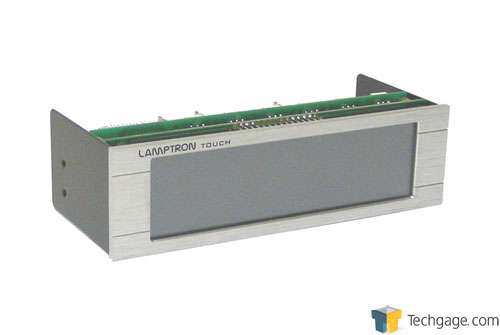 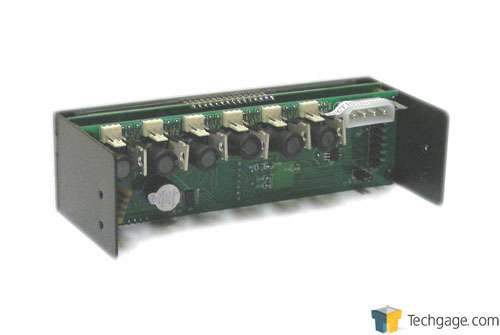 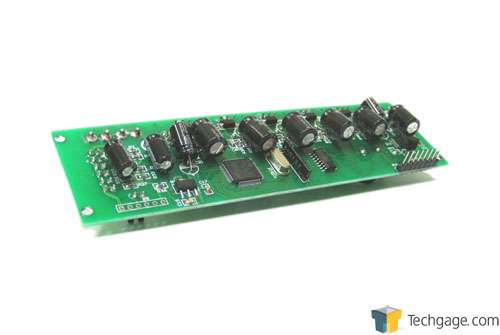 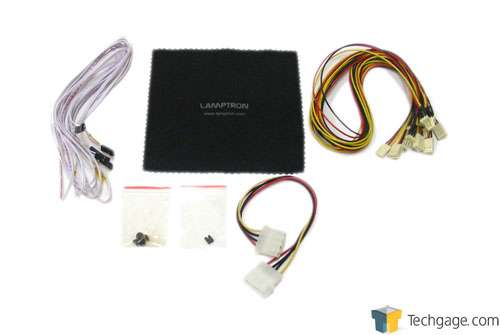 While the controller that we received for review may look a little out of place seeing how most modern cases are black, from a design standpoint, there were no issues at all. Installing the unit was as simple as connecting the power, fans and temperature probes, sliding it into an open 5.25″ drive bay and securing it with the included screws.

All of the connections were made prior to securing the unit since there would be almost no room to work within the drive bay. The fan controller is less than half the depth of an optical drive, so for people with large hands, this proved to be an easier way.

Out of simplicity, testing is being performed outside of the case with our volunteer fans being a 120mm SilenX iXtrema Pro IPX-74-14, an over-the-top 60mm Vantec re-badged Delta AFB0612EH and a spare 120mm fan from a CoolIT Vantage ALC. 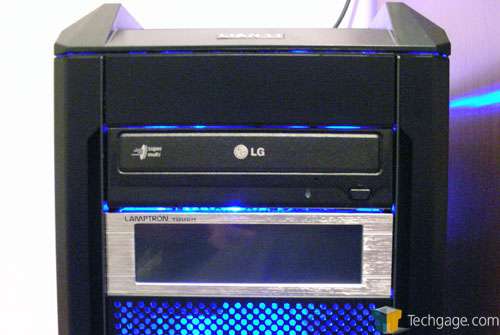 The SilenX fan claims to be capable of moving 72 cubic feet of air per minute (CFM) while spinning at 1400 revolutions per minute (RPM) at only 14 A-weighted decibels (dBA) but proved to be louder as found in previous testing. The Delta is, well, a Delta. It is insanely fast at 6,800 RPM, moves 38.4 CFM at a screaming 46.5 dBA and will skin your knuckles if you are not careful.

Finally, the CoolIT fan was chosen because it is near silent when regulated by the Vantage block/pump unit but can be very loud if left to spin up to full speed. Very little is known about this fan but specs from the website show it is rated for between 1,100 and 2,500 RPM. These three fans should allow this review to cover the full spectrum.

Upon powering up the unit and pressing the small power button on the lower right side of the screen, users are greeted with a display that shows 6 fans in white as well as the ability to choose between three different brightness levels by touching the small light bulb icon in the bottom left corner. To change the performance levels of a fan, simply select that fan number to bring up the options. There are two options overall, A for automatic and M for manual. Automatic will allow the fan controller take over while manual will allow users to tailor the fans to their liking. 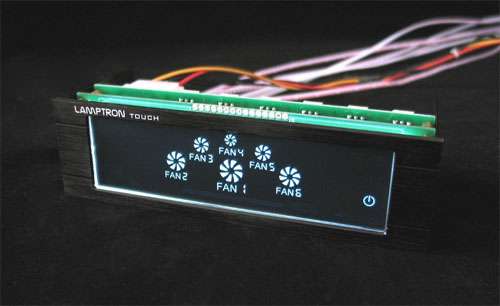 Users can show the current state of the fan in either RPM or voltage. Simply touch the upper left area of the screen that shows either value to switch to the other. Speed or voltage changes are done one of two ways; by touching the percentage indicator to raise the speed in 1% increments or by sliding across the bottom center portion of the screen to change them in real time. Users can switch between fans by touching the left or right arrows. The final option is changing the temperature displayed in the upper right corner from Celsius to Fahrenheit, which is done in the same manner as switching from RPMs to voltage. Just a quick tap will do the trick. 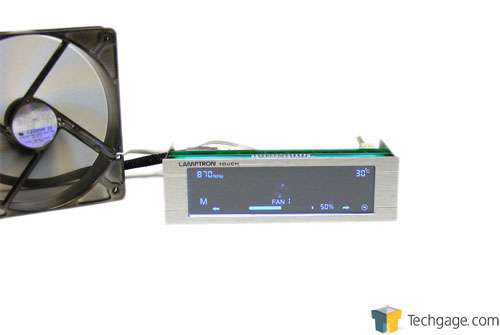 Raising the speed in 1% increments was done for each fan to get an idea of where they began to spin up. This would be for users who want to have the quietest system possible. The SilenX fan began spinning at a mere 820-900 RPM, or 50% while the Delta would sputter to life at 950-1,000 RPM or 38%. The CoolIT fan was a bit of a surprise when it spun up at 1,095 RPM or 49%. This puts it dead in line with how it runs when connected to the Vantage. 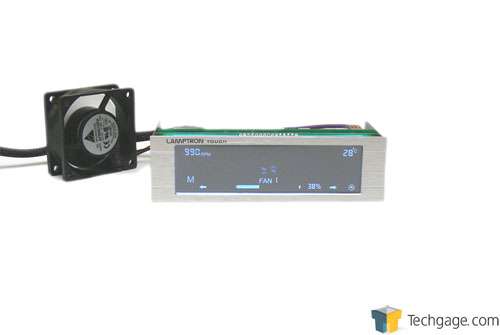 While I am happy with the fact that two out of the three fans are able to run at lower than normal minimum RPMs as specified by the manufacturer, cooling power is sacrificed so it will likely come down to balancing both noise and cooling for each specific fan.

Each area of the screen that allowed for changes was spot on. I was wary of the slide feature that was far from perfect in another controller that I had used, but it worked flawlessly here. A quick tap at the top of the scale and the fan spun up to 100%. Another quick tap in the middle and it dropped to 50%. I found myself at one point going back and forth to see if there was any noticeable delay but found nothing to be concerned about.

I do not think there is much more to say so it is time to wrap this up.

This controller has completely restored my faith in touch based units. It is very simple yet attractively designed, built for some serious punishment thanks to high-end components, the touch screen responds instantly with very little pressure needed and is precise enough for users to really fine-tune each fan in their system with ease. The display can also be viewed at some very extreme angles making it ideal regardless of the location of the case.

I am sitting here trying to find fault with the FC Touch and can only think of one thing. Light that can be seen coming from behind the top edge of the face plate. It would have been nice to see the face plate could extend over the glass in order to block this out. On a controller that works this well, I may just be splitting hairs but it is something to note for those who pride themselves on the appearance of their case.

Availability of this controller seems to be a quite sparse. I could not find a Canadian retailer that carried this particular model. Only a handful of retailers in the US seem to carry it but it comes in at around $70. This may seem like a lot but if you manage to find one at your local retailer, jump at the chance. In the case of this controller, the premium certainly seems valid.

Given this impressive product, you can bet that I will continue to keep a close eye on Lamptron to see what else the company rolls out next.