Finding a “great” keyboard for an HTPC is tough. It seems that most models do a lot of things right, but then miss the boat on the others. With its Illuminated Living Room K830, Logitech is hoping to deliver an option that hits all of the marks, and on paper, the chances look good. Let’s see if it manages to pull it off.

I have long been fascinated with media consumption.Â  When I had access to my first computer with an optical drive, I spent hours ripping my CD collection to MP3 and spent even more time organizing it with the detail of a casualty of OCD.Â  As technology and my personal tastes have evolved over the years, so have my approaches to organization.Â  Now, many years later, I utilize NAS for a centralized repository of media.Â  This NAS serves quite a few different devices around my home, but the most important, and most frequently used, is my living roomâs HTPC running XBMC.

Interfacing with the HTPC has been an evolution in and of itself.Â  From a mobile app to conventional keyboards and mice, they have all been functionally sound, but clunky nonetheless.Â  For day-to-day use, itâs been difficult to find something both functional and less cumbersome.Â  Iâve been hesitant to employ a remote, as the box still requires a keyboard for many of its features.Â  Up until recently, a Logitech diNovo Edge has filled this necessary role.Â  Its design is still, years after release, fashionable, but the built-in track pad is almost completely useless.Â  Itâs approximately the size of a US half-dollar coin, and while functional, itâs just barely.

Wireless keyboards have been the subject of many late night discussionsÂ with my old roommate and good friend Matt.Â  We both agreed, years ago, that a keyboard with a built-in trackpad would be the ideal wireless keyboard for interfacing with a PC thatâs connected to a television.Â  Because of these many discussions, my interest was piqued when Logitech released its K830 keyboard. Â With many features that make it appealing, such as backlit keys, multimedia keys, and a built-in trackpad, the K830 seems like it could be an ideal solution for those of us looking for just such a device.

Measuring 14.4 inches in length, 4.9 inches in depth, and .65 inches in height, the K830 is significantly smaller than most keyboards used on a daily basis.Â  Even with a trackpad that measures 3.1 x 2.0 inches in size sitting to the right of the keys where most expect a number pad to be found, the K830 is smaller than the diNovo Edge itâs replacing.

Rounded on both ends, the K830 has a reflective silver piece that runs along both the bottom and top of its diminutive frame.Â  From left to right as we face the keyboard in its normal orientation, there are three notable features to point out.Â  First is a left mouse click button to be used if the keyboard is being held like a tablet and the right thumb is operating the trackpad.Â  Next is a micro-USB port, used for charging the keyboard. The finalÂ is a somewhat difficult to use on/off switch that is color-coded for easy identification.Â  Green means that the K830 is on, and orange means itâs off.Â  More on this in a bit. 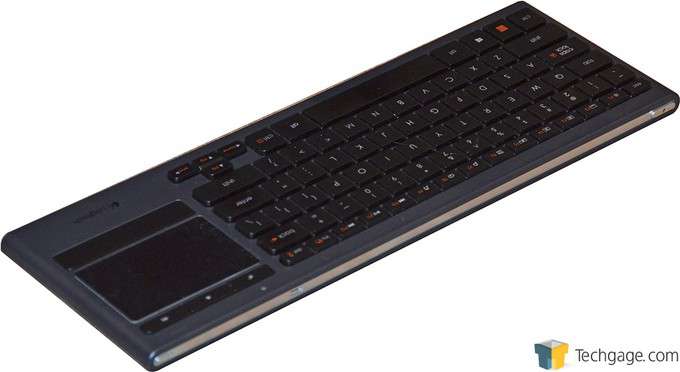 The keys are of the Chiclet variety.Â  MacBook users might be familiar with this type of key, as might others as this type of key has been widely adopted by keyboard manufacturers over the past few years.Â  All keys are large enough for quick typing, yet close enough to keep down the overall size of the K830 considerably.Â  Function of the keys is soft and pleasant, and my overall ability to type quickly was no different from the diNovo I used every day after a day or so of getting used to the layout. 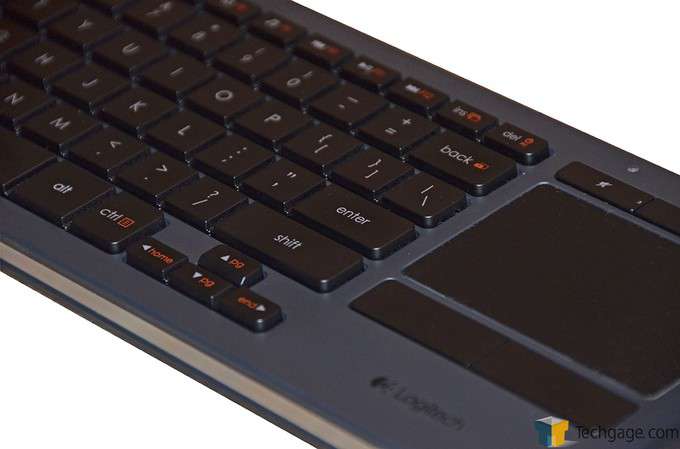 Coming back to the top of the K830, we take a closer look at the power button and the micro-USB port.Â  We also see the audio control keys that sit on top of the trackpad.Â  Also situated above the trackpad is a light sensor that will brighten or dim the backlit keys, depending upon the ambient light in the room.Â  Once lit, they will remain on for five seconds after last use. 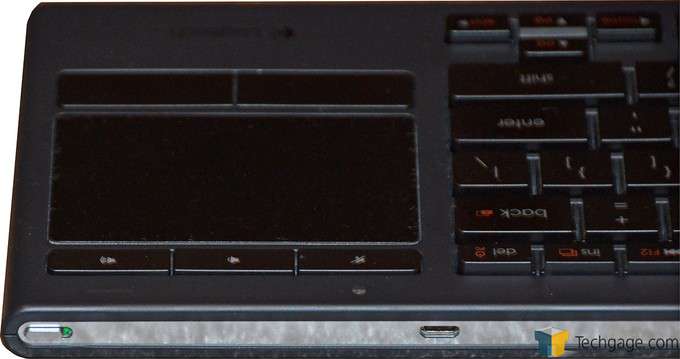 Unable to get a respectable picture of the keys when lit, I present to you a stock photo from the Logitech K830 product page.Â  While the red media functions are brighter than they actually appear on the keyboard itself, the backlighting is accurate.

Once connected using the popular unifying RF receiver (max range of approximately 33 feet), the included software can be installed to allow better control of the keyboard.Â  The function keys can be toggled between standard PC functions and media functions by ticking a check box at the bottom of the first screen after the software is opened.Â  Another notable feature of this program is that it provides a very quick graphical representation of the battery state of the K830. 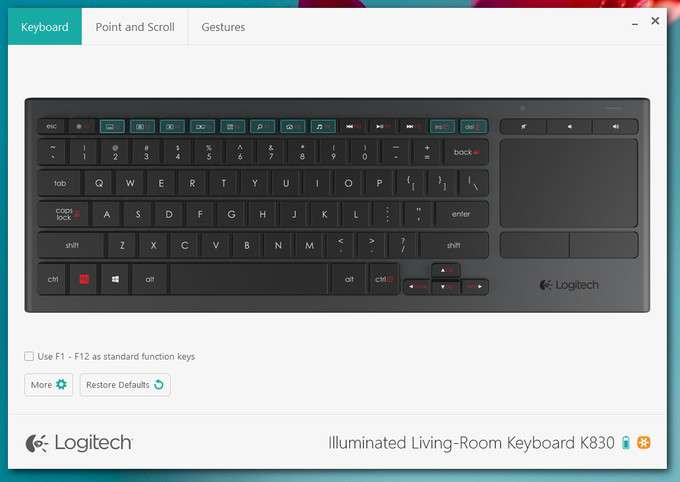 The point and scroll capabilities of the K830 are controlled by the second tab in the controller program.Â  This allows a few features of the trackpad to be changed.Â  As a Mac user for the past few years, I appreciate the trickling-down of gestures into the PC world. 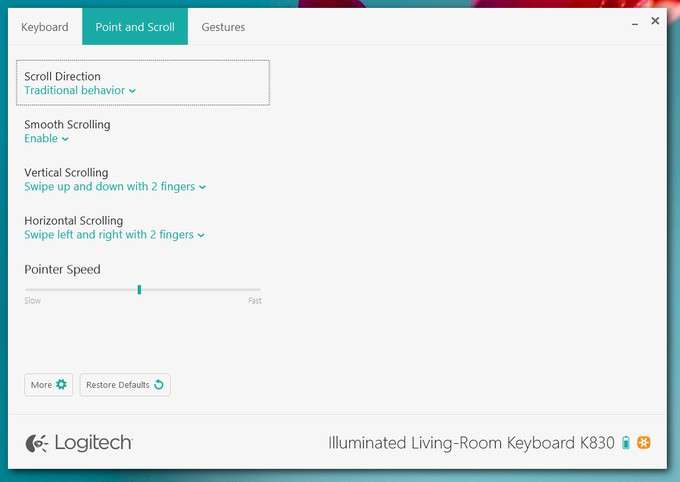 Speaking of gestures, the last tab of the companion software allows the behavior of certain gestures to be changed or disabled.Â  This makes using the K830 a truly customizable affair. 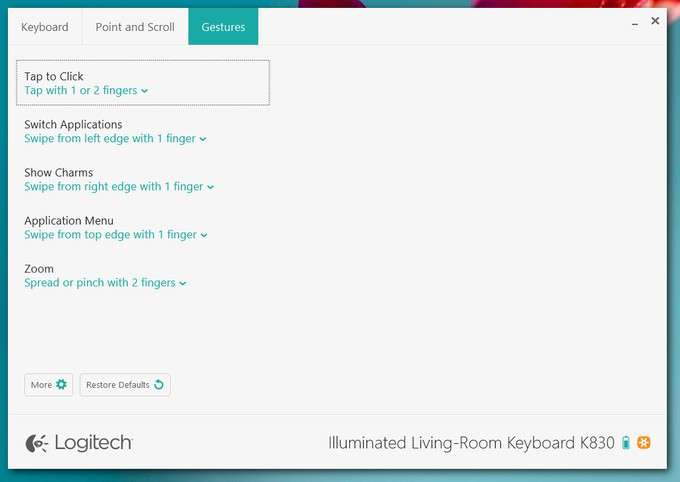 Logitech has long been one of the go-to manufacturers of quality PC peripherals over the past decade.Â  Longer than that, actually.Â  While some products take the user into new and exciting areas, others simply improve on a current design.Â  The K830 does the latter of the two.Â  It builds on the stellar K400 by adding more multi-media options, as well as improving all-around on the styling.Â  The K830 deserves to be considered by anyone looking for a good living room keyboard.

In myÂ use of the K830, I have not once had to charge it after the initial setup.Â  Logitech states that the average charge should last 10 days when the keyboard is used for 2 hours per day.Â  In my household, the K830 was only used for HTPC manipulations and XBMC control.Â  It was tested in more traditional use case scenarios for the first couple of days, but after that, it was strictly used as a keyboard for my HTPC.Â  In both scenarios, it performed admirably.

With anÂ MSRP of $99, the K830 will likely be overlooked by many.Â  While we feel that it is worth the suggested price, there are cheaper options out there.Â  That being said, I have noÂ qualm with recommending the K830 to anyone on the hunt for a media center keyboard of their own, and like the styling and design of this one.Â  Its light and concise design makes it perfect for use in oneâs living room, and its range extends its use out to a distance likely longer than most of our living rooms.