The PC version of the original Lost Planet brought gamers DirectX 10 support, and to follow in its footsteps, Lost Planet 2 will support DirectX 11. Though the game’s release date hasn’t been announced, Capcom has released a benchmark that allows us to test out both modes, so that’s just what we did.

In early 2007, Capcom released Lost Planet: Extreme Condition for the Xbox 360, and about six months later, it became available for the PC. For PC gamers, the “Extreme” delay wasn’t exactly appreciated, so to help keep interest high in the title, Capcom unveiled DirectX 10 support for the game.

At the time, many PC gamers were sporting either AMD Radeon HD 2000 or NVIDIA GeForce 8000 series of graphics cards, both of which supported DirectX 10. Given that the DX10 software selection was quite slim, many gamers opted to purchase the game when it first came out, and in the case of sites like ours, it became a popular benchmarking tool also.

The problem, though, was that the game was hit or miss for gamers in terms of likability. Personally, the game did little to grab my attention, and I found myself rather bored a mere hour or two into the game. To make things worse, the game was plagued with performance issues when running under DX10 mode – even the top-end cards were sluggish.

Despite all that, the game sold very well, and paved the way for Lost Planet 2. In almost a rinse and repeat scenario, both the PlayStation 3 and Xbox 360 saw the game’s release this past May, with the PC release still tentative. To help make up for the familiar delay this time around, Capcom has introduced DirectX 11 support into the game.

Though the game’s official PC release date is unknown, Capcom has gone ahead and released a Lost Planet 2 benchmark that allows you to test both DX9 and DX11 modes. Unfortunately, unlike the Lost Planet: Extreme Condition demo release, which was both a benchmark and playable demo, the one for Lost Planet 2 is strictly for benchmarking. It could be assumed that we’d see a playable demo closer to launch. 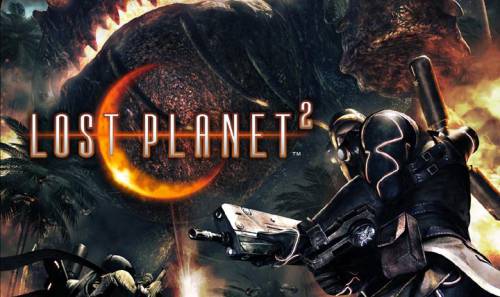 As Lost Planet 2 is the latest game to see DirectX 11 support, we thought we’d take the benchmark for a spin and see just how worthy this support really is. Because the benchmark is non-playable, we can’t offer opinions as to how good the gameplay is, so we’ll leave that for our review of the game at its launch.

In this article, we’re going to take a quick look both at initial performance data for both the GeForce GTX 480 and Radeon HD 5870 cards, and also provide screenshots and a video that shows the benchmark running in DX9 and DX11 modes. The reason we opted to only benchmark two cards is simply because the data we have today won’t be all too useful. The game has no release date, so by the time it actually lands, there will no doubt be optimizations added in, from either Capcom or the GPU vendors.

This benchmark consists of “Benchmark A” and “Benchmark B”, and according to NVIDIA, it’s the Benchmark B that should be focused on, as it shows the DirectX 11 elements off a lot better. Benchmark A is better for 3D Vision testing, but that’s not something we delved into.

From a DirectX 11 technical standpoint, Lost Planet 2 features heavy use of tessellation and displacement maps, and in many regards, a lot of the comparisons you’ll see are likely to remind you of Unigine’s Heaven benchmark, where the differences between turning tessellation on and off are rather stark.

In addition, DirectCompute soft body simulation is used, primarily for the level’s bosses, which helps make for much more realistic reaction of the monster’s skin and other elements. Similar to this, water is also affected with DirectCompute’s wave simulation. Physics elements come into play here, where anything can affect the water in a natural manner, from bullets hitting the surface to a character walking through a stream to get to the other side.

It all sounds cool on paper, but just how much better does DirectX 11 help Lost Planet 2 look? Below, we have a handful of comparison shots that simply compare DirectX 9 to DirectX 11 “High” modes. We tried to take the screenshots at the exact same time for each mode, but we weren’t perfect, so please bear that in mind. There will be subtle differences that have little to do with the DirectX version.

Thanks in part to tessellation, the boss looks much more defined in DirectX 11 mode, especially with regards to his legs and multitude of horns. This is one of those things, though, that I am not sure many people would even notice unless there were two screenshots side-by-side, like here.

After personally comparing the screenshots on the previous page to each other, I found myself becoming a little underwhelmed, because in some of these shots, the differences are almost negligible. And in some cases, gamers may not even be able to pick which mode they prefer since the differences just don’t stand out enough. Strangely enough, it turns out that our screenshots pale in comparison to some that NVIDIA provided us, so for the sake of showing the true vision of DX9 vs. DX11, here they are:

As you can see, the differences seen here are much more obvious. Why we didn’t see such stark differences in our own tests, we’re unsure. We can hope that when the final game launches, there will be just as much of an extreme difference, because it’s without question that DirectX 11 mode reigns supreme here.

To give a better example of DX9 vs. DX11 “Low” vs. DX11 “High”, we recorded the benchmark on all three and compiled them into a video. Please note that like our personal screenshots on the previous page, the differences are going to be difficult to spot. We recommend viewing this video at 720p or higher in order to have an easier time at spotting the differences.

We couldn’t wrap up this article without a quick look at performance, so let’s do that. Our benchmark machine consists of a Core i7-975 processor overclocked to 4GHz, Gigabyte’s EX58-EXTREME motherboard, 12GB of Corsair DOMINATOR memory and a Seagate Barracuda 500GB 7200.11 hard drive. We recorded the FPS with the help of FRAPS since the benchmarking mode doesn’t supply a minimum FPS. 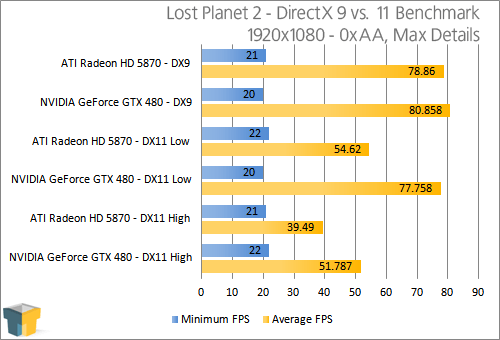 It’s clear why NVIDIA poked us to test out Lost Planet 2, because its GF100-based card struts its DX11 muscle here quite noticeably. The GTX 480 is the faster card all-around to begin with, but its with the DX11 modes when it really pulls ahead. It will be interesting to see how AMD’s upcoming “Southern Island” series of HD 6000 cards will compete against NVIDIA’s current fleet where DirectX 11 is concerned.

As mentioned earlier, the release date for Lost Planet 2 is currently up in the air, but whenever it does show up, we plan to take it for a spin and in all likeliness provide a proper review of the game. And, if it happens to prove worthy for benchmarking, it might just find itself in our GPU testing suite.